Carbon tariffs are coming. Here’s how the U.S. is preparing 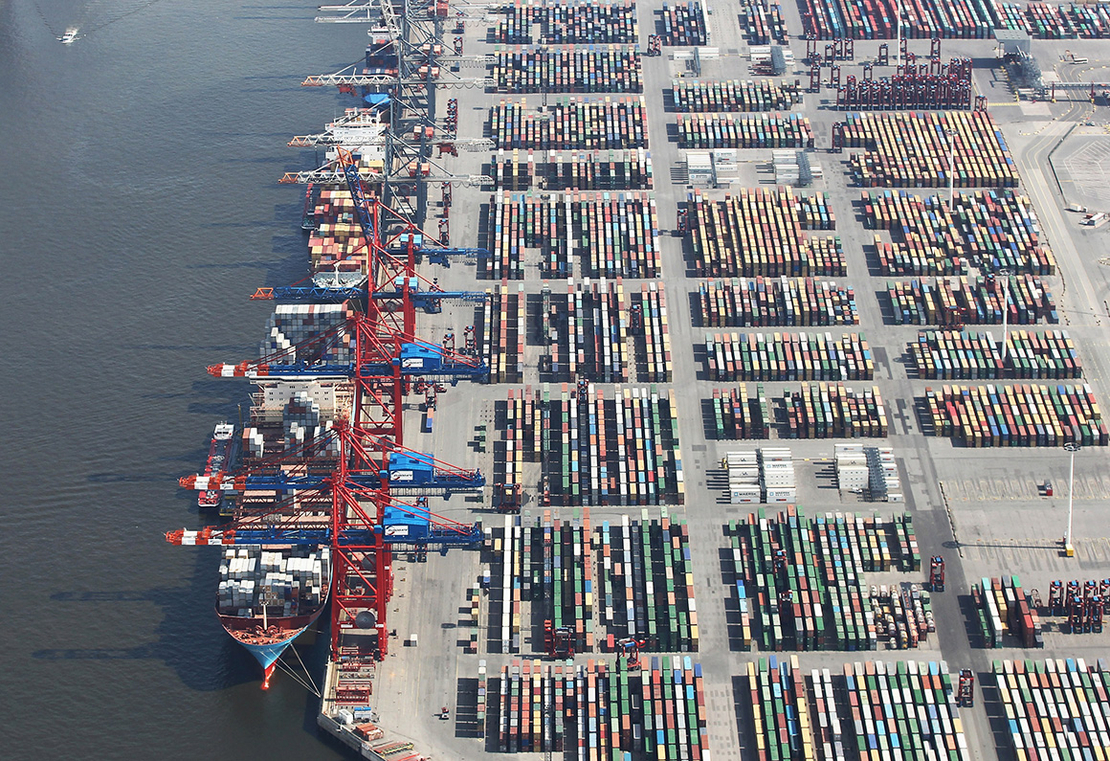 Hundreds of shipping containers are seen at the Port of Hamburg in Germany. Europe is advancing plans to tax carbon-intensive imports from other countries. Andreas Rentz/Getty Images

The world’s first carbon border fee was always expected to roil nations that export their emissions through polluting goods. Now it could go further than originally proposed.

The European Union brought carbon border adjustments into the spotlight last year. Since then, the proposal has gained momentum among legislators who want to expand its scope and ambition and raised discussion among other countries considering similar measures. Across the Atlantic, U.S. lawmakers and industry are keeping a close watch, wary of how it might impact American trade and manufacturing.

“There’s a real prospect that Canada, E.U. and U.K. all basically bind together on a common carbon border adjustment. And if we haven’t joined up with them, we’re just sort of deliberate losers,” Sen. Sheldon Whitehouse (D-R.I.) said in an interview after introducing a bill last week that would create a U.S. carbon border fee (Climatewire, June 8).

Europe’s proposal would place a price on the carbon in imported goods covered by the border adjustment. If importers already pay a tax on that carbon, the price they pay is adjusted.

Europe is moving aggressively forward. Its latest amendment to include more sectors under the tariff would affect $16.9 billion in exported U.S. goods. That’s a huge jump compared with the E.U.’s initial plan, which called for enforcing the carbon fee on $2.8 billion in American exports. By 2030 all sectors covered by the E.U.’s emissions trading system would be included.

The newest plan also calls for lower tariffs on goods from countries that have an “explicit” carbon price, which the U.S. does not.

Those measures — and the speed at which the E.U. is working to push through its proposal — are stirring concerns on both sides of the political aisle on Capitol Hill.

Sen. Kevin Cramer (R-N.D.), a rare Republican proponent of carbon border fees, said last month that he wanted to be in concert with Europe and not play catch-up.

“I do worry,” he said at an event focused on climate and trade. “It may very possibly become very problematic for us if they would go too far ahead of us without a reconciled solution.”

Mohammed Chahim, a Dutch lawmaker who’s leading negotiations over the carbon border adjustment in the European Parliament, said he’s seen an about-face from U.S. leaders since the end of last year. At that time, a group of 19 senators wrote a letter to President Joe Biden urging him to oppose the E.U.’s “unilateral implementation” of a carbon border adjustment, which they viewed as unfair to the United States.

“Now they send me emails [asking] how can we align our proposals?” Chahim told reporters during a recent briefing on the proposal.

He does see areas for compromise, like in the way carbon content in goods is calculated. Getting the E.U. and U.S. aligned on that metric could make the border adjustment easier to implement.

“There will still be some issues between us, but the benefit from both continent and country will be higher than the administrative burden or the tariff that needs to be paid,” Chahim said.

From Beltway to boardroom

The American Petroleum Institute has endorsed carbon pricing and is drafting a carbon tax proposal that includes support for a carbon border fee (Climatewire, April 22).

Sources familiar with those discussions say they’re watching what happens in Europe so they can be prepared. Even if fossil fuels are not initially covered under the border fee, they could be in the future, industry sources said.

“We think that it’s natural that border adjustments would be extended over time to many more products,” one source said.

The European market will become increasingly important for the U.S. natural gas industry as the E.U. tries to offset Russian supplies in retaliation for its war in Ukraine. And carbon-heavy industries are paying attention to how Europe will calculate the carbon emissions embedded in goods that come across its borders, since those methodologies will likely be applied to future imports.

BASF SE, a multinational chemical company with global headquarters in Germany, told E&E News that it’s monitoring “all policymaking” that might have an impact on its business operations.

Building materials company Holcim U.S. is a net importer of cement — one of the sectors under Europe’s proposed border fee. The company is focused on whether the tariff could increase competition domestically if countries try to circumvent the tariff by redirecting their carbon-heavy products to the United States, said Virgilio Barrera, director of government and public affairs at Holcim U.S.

The specifics of what Europe is doing have factored less into U.S. lawmakers’ thinking.

“The way the conversations are playing out in Congress has much more to do with domestic politics, with the interest in finding bipartisan areas of collaboration on climate and with the general context of concern around trade, in particular with countries like China,” said Nat Keohane, head of the Center for Climate and Energy Solutions, a nonprofit that’s advocating for U.S. climate policy.

But its importance as a potential point of bipartisan climate action shouldn’t be overlooked, he added.

Like the Kigali Amendment, which targets superpollutants known as hydrofluorocarbons, there is political logic to framing carbon border fees as something that can increase U.S. competitiveness, since many goods that would be covered by the tariffs are less carbon-intensive than those made in other countries (Climatewire, May 5).

But Republicans and Democrats are not aligned on the measure.

The bill introduced by Whitehouse and three other Democrats last week would impose a levy starting at $55 a ton on a wide range of carbon-intensive imports, similar to what’s envisioned in Europe. It would also offer a rebate for exports, making it more of an adjustment than a tariff. He’s hoping the measure will gain the backing of Republicans who have expressed support for carbon border fees.

Republicans have gelled around the policy as a competitiveness measure that would benefit U.S. businesses over global competitors, mainly China and Russia. And they’re staunchly opposed to pricing carbon. Experts argue that levying a fee on imported goods without also subjecting domestic producers to a carbon tax is not actually a border adjustment — and it could face allegations of protectionism at the World Trade Organization.

Those differences highlight how the U.S. and E.U. are going down different paths, said Raymond Kopp, a senior fellow at Resources for the Future.

“If you think about the interests that right-leaning senators have had on this, it is really using the border measures to protect U.S. industry, without really too much emphasis on ‘let’s reduce the emissions from U.S. industry, let’s leverage what’s viewed to be a competitive carbon advantage,’” he said.

“That’s obviously not what the E.U. is doing. The E.U. is taking real measures to reduce its emissions and then trying to put measures in place to protect its domestic industry,” Kopp added.

The Republican plan may not actually reduce emissions. A recent study by the Niskanen Center found that some of the world’s biggest polluters don’t export a large portion of their emissions, making punitive measures, or tariffs, a lot less effective at reducing emissions than domestic climate policies.

Emissions are embedded in a lot of goods that are traded internationally, however, and that’s where border-adjusted taxes could lower greenhouse gases.

A carbon border tax is in principle trade neutral. It’s not trying to encourage or discourage trade, said Shuting Pomerleau, research manager of climate policy at the Niskanen Center and the author of the study. It would encourage more cleaner imports and fewer dirty imports, but the total volume would not change. It’s just changing the composition of goods, Pomerleau said.

The carbon border fee does face challenges in the E.U. from industry and conservative political groups that say it’s an untested experiment that will raise costs for energy-intensive businesses. They’ve also raised concerns, similar to the those circulating in the U.S., that the tariffs could be circumvented by so-called resource shuffling — when countries export their cleanest products to Europe while sending their polluting goods elsewhere.

Parliamentarians reached an agreement Tuesday that would maintain the ambition of the border fee after negotiations ran aground in European Parliament last week over a disagreement about reform to the E.U.’s emission trading system. A final vote is expected next week.

But observers say the border fee remains a pillar of European climate policy and will almost certainly be implemented, even if the pace of passage slows.

The latest amendments would increase the number of sectors covered by the tariff to include organic chemicals, hydrogen and polymers, with more to come by 2030.

Adding those sectors would increase the value of trade impacted by the fee from $2.8 billion — the value of U.S. exports for steel, iron, aluminum, cement and fertilizer — to nearly $16.9 billion, according to the Climate Leadership Council, a center-right organization that advocates for a carbon fee. That would be equivalent to around 16 percent of U.S. exports to the E.U. in 2020.

Tracking the potential impact to American exports could be a key point of negotiations between the U.S. and E.U., said Catrina Rorke, senior vice president for policy and research at the Climate Leadership Council.

In the case of products like steel, the U.S. could potentially gain a small competitive advantage since it emits a little less than the E.U., said Oliver Sartor, a senior adviser on industry at Agora Energiewende, a German clean energy think tank.

“Politically speaking, however, it is a signal to the U.S. that its energy-intensive industry will need to decarbonize if it wants to remain competitive and retain access to these product markets in the future,” Sartor said.

Correction: A previous version of this article mischaracterized how the proposed border fee would be applied to the carbon content of imported goods.