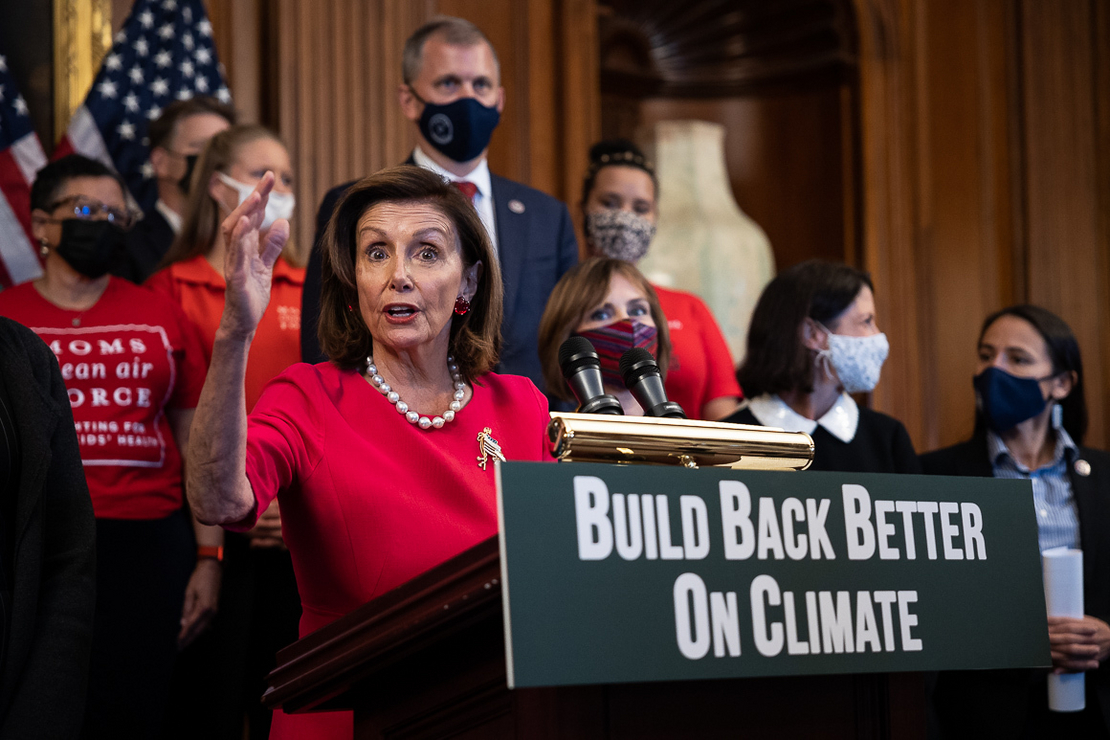 Carbon pricing is back in the climate change conversation, but House and Senate Democrats are at odds about the policy as reconciliation talks reach a breaking point.

Senate Finance Chair Ron Wyden (D-Ore.) is pushing for what effectively amounts to a carbon fee and dividend system that top Senate Democrats see as one of the most important climate policies under discussion for reconciliation.

But the House is less enthusiastic. Having already marked up their vision for a $3.5 trillion spending package, House Democrats say Wyden needs to show them a concrete proposal before they can take the carbon pricing talk seriously.

Select Committee on the Climate Crisis Chair Kathy Castor (D-Fla.) said “there really hasn’t been any discussion at all” about carbon pricing on the House side. “I think it’s unlikely at this point,” Castor said.

“We had committee markups. All of the options were out there,” Castor added. “We decided, no, the way to go is through tax incentives, a clean energy payment plan and a methane fee.”

It’s emerging as another potential hurdle at a critical moment for reconciliation talks. House Democrats are still on a collision course, with progressives reiterating their threats to vote down the bipartisan infrastructure bill tomorrow without a deal on reconciliation.

The House caucus, with a few exceptions, appears to be united on the broad contours of climate policy. It’s a point Speaker Nancy Pelosi (D-Calif.) stressed yesterday, holding a media event on climate with a group of rank-and-file members, some from front-line districts. But they appear to have made little headway in negotiations with the Senate, which could only aggravate the political fight over the timing for reconciliation.

Democratic leaders said yesterday their first objective was agreeing on a lower top-line number for the reconciliation package, which would then pave the way for finalizing outstanding policy disagreements.

“Once we get that top-line number, then we have to look at what that number will fund of the priorities that we have in the House bills that have been set forward by our committees,” House Majority Leader Steny Hoyer (D-Md.) told reporters.

Still, it’s increasingly clear that carbon pricing — and a list of other climate policies — will be an issue for talks with the Senate if and when Democrats can settle on the top line.

Committee Chair Richard Neal (D-Mass.) has made much the same point in recent days. His panel’s reconciliation package did not include either a price on carbon or a carbon border adjustment. If the Senate wants to push its vision for clean energy taxes and a carbon fee, Neal said Monday, “they should do a markup on those things” (E&E Daily, Sept. 16).

“I just heard about that,” Manchin said when asked about carbon pricing yesterday. “That has not been in the equation at all.”

Other Senate Democrats, however, insist that they’re serious about carbon pricing and that they are discussing a specific framework for the policy.

“A whole host of senators came back to Washington for the September session, and they said, ‘Let’s go all-in and put together a pricing strategy,’” Wyden said yesterday. “And what we’re doing now is talking through how you might do it.”

He vowed to protect President Biden’s campaign pledge not to raise taxes on individuals who make less than $400,000 annually — a position that killed efforts to raise the federal gasoline tax and create new user fees on electric vehicles as pay-fors during negotiations over the Senate’s bipartisan infrastructure package.

“We’ve studied some of the examples that you’ve seen around the country,” Wyden said. “We are going to make sure that working people in the middle of a transition, which is what is being discussed, are going to be in a position to pay the bills.”

One option under consideration, Wyden said, is exempting gasoline from the carbon pricing plan.

Sen. Tom Carper (D-Del.), who sits on the Finance Committee, said Democrats are “having the beginning of a good conversation” on carbon pricing and said there’s a menu of options for doing so without violating Biden’s pledge.

For instance, he said Democrats worked with the IRS and the Government Accountability Office to find ways to offset the increased burden of raising gas and diesel taxes for lower-income Americans through the earned income tax credit and other tax provisions, including rebates.

“There’s a couple of ways to skin a cat,” he said in an interview.

Sen. Ben Cardin (D-Md.), also a Finance member, said most of the revenues raised by a pricing system would be refunded to individuals making less than $400,000, rather than being used to offset the cost of the reconciliation bill.

“The price on carbon is not so much as a revenue raiser as it is to reduce our carbon footprint,” Cardin said.

“If you do carbon pricing right,” he added, “I think it’s the most significant policy change to deal with climate change in this bucket of issues that we’re dealing with.”

At this point, that’s not a perspective shared by House Democrats, who view the proposed Clean Electricity Performance Program (CEPP) as the bill’s climate linchpin.

“I’m not drawing any red lines right now other than to say that if we don’t have the CEPP, for all practical purposes, we are not acting like climate is a problem,” Rep. Sean Casten (D-Ill.), a member of the select committee, said yesterday. “I mean, that is overwhelmingly the biggest thing that’s in there.”

Manchin, however, outlined specific concerns with the CEPP yesterday, arguing that reliability would be “the big loser” if the policy were enacted (Greenwire, Sept. 28). It was a point of contention during an Energy and Natural Resources hearing, and backers of the policy say Manchin’s reliability fears are unwarranted.

But Manchin also did not close the door entirely on the CEPP. Rep. Paul Tonko (D-N.Y.), who chairs the House Energy and Commerce Subcommittee on Environment and Climate Change, acknowledged yesterday that the policy’s structure could change in negotiations with Manchin.

The current CEPP proposal, as drafted by E&C, would offer grants to power providers that increase clean generation at least 4 percent each year and fine those that do not, with an emissions benchmark that excludes most natural gas and coal from being counted as clean (E&E Daily, Sept. 10).

“We’ve been in constant communication, and I think people understand that it’s important,” Tonko told E&E News. “You’ve got to have some major climate pieces, and I think we’ll get there, but it’s taken time. I don’t think it’ll fall out.”

Sen. Brian Schatz (D-Hawaii) similarly projected confidence that the CEPP is not in particular danger in negotiations, though he acknowledged the uncertain ground Democrats face on reconciliation.

“I don’t feel that there’s special jeopardy for this particular program,” Schatz told reporters. “I think everything’s being negotiated over, and so to the extent that there’s risk, it applies to everything.”

There are also two other major climate items on the negotiating docket: a carbon border adjustment and differing visions for overhauling clean energy tax incentives.

The border adjustment, a tariff on carbon-intensive imports, is absent from the House reconciliation package, and it’s not clear exactly where it stands in talks between the two chambers. There are also concerns it could run into hurdles at the World Trade Organization if the final package does not also include a domestic carbon fee that affects U.S. industry.

Part of the calculation on carbon pricing, Cardin said, is that it would offer a “definitive price that can be included in the border adjustment.”

Meanwhile, Wyden said there is broad support for maintaining the clean energy tax provisions his committee passed earlier this year, despite the differing approach included in Neal’s package from Ways and Means (E&E Daily, Sept. 16).

“The president has talked about his [emission] targets,” Wyden said. “I don’t think you can hit those targets without the kind of thing we’re talking about.”

Wyden and other Democrats also signaled support yesterday for provisions from legislation, S. 2140, authored by Sen. Jon Ossoff (D-Ga.), which they think should be included within the budget reconciliation legislation.

Ossoff’s bill, introduced in June, would provide new tax credits for the manufacture of numerous components within the solar energy supply chain, including modules, photovoltaic cells and polysilicon (E&E Daily, June 23). Wyden called it “one of the essential pieces of the puzzle.”

‘Everybody’s not going to get what they want’

In the immediate future, House leaders are hoping to settle on a framework for reconciliation to boost confidence among progressives wary of voting on the bipartisan infrastructure package tomorrow. But Hoyer said they’re unlikely to have legislative text this week.

“It will take a fair amount of work,” he explained. “I think it will be done relatively quickly, but it certainly can’t be done by the end of this week.”

A smaller price point is already threatening to alienate progressives in both chambers who think $3.5 trillion doesn’t go far enough.

Senate Budget Chair Bernie Sanders (I-Vt.), who caucuses with Democrats, said yesterday the bill must cost $3.5 trillion “at a minimum” and released a statement praising House progressives for standing firm against passing the bipartisan bill without a deal on a larger reconciliation package.

Wyden said Democrats are considering imposing means tests and limiting the duration of specific provisions to lower the price tag.

The current reconciliation bill would fund most programs for 10 years. Some could end up with a shorter window, including, Wyden said, the Civilian Climate Corps — a program he has championed that is expected to receive $30 billion through reconciliation.

Congressional Progressive Caucus Chair Pramila Jayapal (D-Wash.) — who announced yesterday that the majority of her 96-member contingent was prepared to vote down the bipartisan bill tomorrow in the absence of a firm reconciliation deal — questioned the value of imposing income limits or similar means testing to lower the price tag without sacrificing whole programs. Lawmakers are specifically discussing applying means testing to electric vehicles, among other areas (E&E Daily, Sept. 28).

“I have been really clear that we have to deliver the benefits quickly without putting big burdens in people’s way,” Jayapal said. “And all the research shows that when you do that kind of means testing, you actually prevent people who desperately need the benefit from getting it.”

In the meantime, the question of just how close Democrats are to agreeing on a new top-line number remains a mystery. Members say they are waiting for Manchin and Sen. Kyrsten Sinema (D-Ariz.) — who met with Biden at the White House yesterday — to make a proposal.

But Sinema returned from her meeting declining to comment, and Manchin was tight-lipped.

“No commitments made at all,” Manchin said. “Just good negotiations and talking about the needs of our country. … We’re still negotiating in good faith."

He added, “Everybody’s not going to get what they want, I don’t think, but let’s find out what the country needs.”