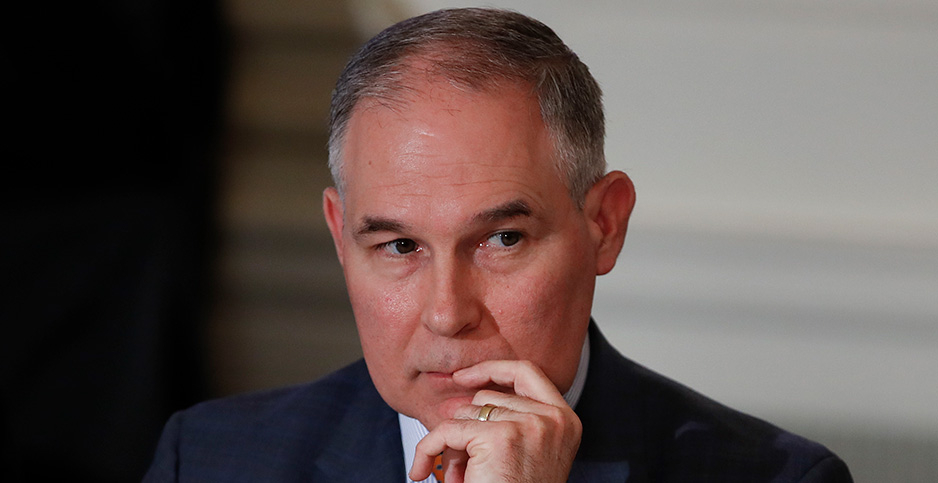 A top EPA career official who raised objections to Administrator Scott Pruitt’s spending and travel demands has been moved outside the agency.

Allen, who goes by Reggie, will remain an EPA employee but work at the university. He starts at GMU on Monday.

Under the law, federal employees can be assigned temporarily to work outside of their agencies, such as in state and local governments as well as at schools and universities.

"George Mason University is interested in developing stronger relationships with the federal government as a means of broadening student experiences and future career opportunities. This agreement will help serve that purpose. Mr. Allen has an extensive leadership and management background, which will benefit the department and university," Sandler said.

Some of Allen’s duties at the university will include providing class lectures on EPA, conducting research on leadership and management, and coordinating a mentor program.

Under the agreement between EPA and GMU, Allen starts next week, and his assignment at the university ends on April 14 next year. EPA will continue to pay Allen’s salary, according to Sandler.

Allen was an assistant deputy chief of staff who headed EPA’s Office of Administrative and Executive Services. The office manages the personnel and programs of the administrator’s office, including payroll, travel and contracting.

"He was a natural leader who brings the team together," a former EPA employee said.

In that post, Allen, a retired Army colonel who served 30 years and led combat troops in Iraq, raised objections to various spending requests by Pruitt. He soon had a change of job at the agency.

The New York Times reported last week that Allen was transferred to a different EPA office where he mostly worked alone.

Democratic lawmakers identified him in a letter yesterday to Pruitt, saying a Trump EPA political appointee, Kevin Chmielewski, told them that when Allen refused to authorize some of Pruitt’s spending, "his responsibilities were removed."

According to the former EPA employee, Allen told Pruitt and his aides they were requesting to stay in hotels that were too expensive under federal travel guidelines — an allegation that Chmielewski also made, as noted in the Democrats’ letter yesterday.

"Reggie had to tell them that there were rules and they had to stick by them. He was very unpopular because he was telling them what they needed to do to just keep it legal," the former EPA employee said.

Other career EPA officials who have run into disagreements with Pruitt and his top aides have also gone to academia. One of those officials, John Reeder, a deputy chief of staff at EPA, later joined American University as an executive in residence.

Allen appears in records won by American Oversight, a liberal-leaning watchdog group, through Freedom of Information Act litigation against EPA. Those documents detail some of what the agency spent to refurbish the administrator’s office.

In April 2017, Allen responded to a question about biometric locks for Pruitt’s office after being told they would not count against the federal limit of $5,000 for office redecoration.

"Approved," Allen said in an email.