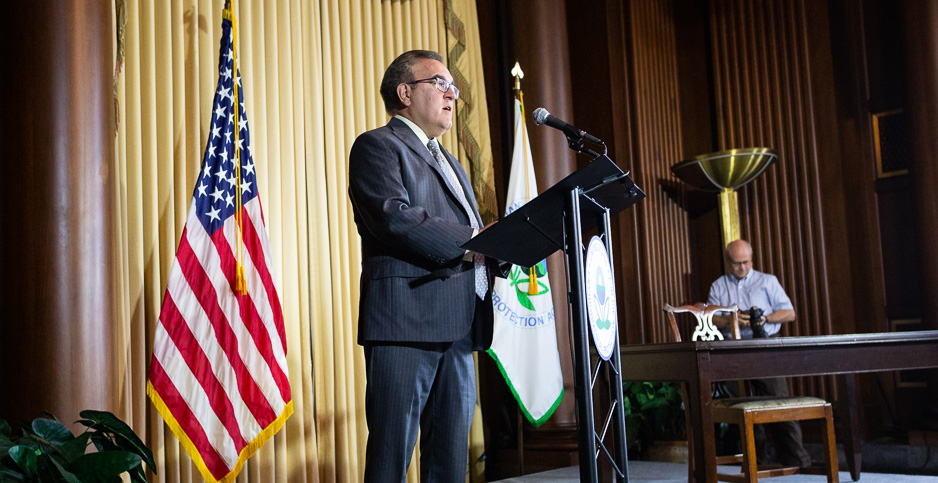 The Trump administration’s line of attack against the National Climate Assessment came from EPA career staffers who worried that the alarming report would undermine their modeling work, a former senior political official told E&E News.

Mandy Gunasekara, who was EPA’s deputy air chief until her February departure, said technical staff in EPA’s Office of Atmospheric Programs raised concerns about the use of higher-end assumptions in the report during weekly meetings with herself and then-Assistant Administrator Bill Wehrum.

Then-OAP Director Sarah Dunham and her team worried, Gunasekara said, that the report’s findings from one modeling scenario could become its overall narrative.

"I think there’s a general frustration internal to the technical team at EPA when people focus on scenarios that are pretty far removed from reality," said Gunasekara, who is now president of the Energy 45 Fund, which supports President Trump’s policies on energy and the environment. "For the people who are truly committed to figuring out ‘what are the outcomes going to look like’ and who want to educate people based on better understanding and not ginning up political rhetoric … they do not like the focus on these extreme scenarios."

Gunasekara said she relayed those doubts to EPA Administrator Andrew Wheeler in briefings ahead of the report’s Black Friday release. He hasn’t stopped referring to them since.

In interviews, public appearances and press calls as recently as last month, Wheeler has parried questions about the NCA’s dire warnings about climate risk — which contrast sharply to Trump administration views — by calling them the product of "extreme scenarios."

He’s charged that the Obama administration cherry-picked scenarios and blamed the press for reporting the report’s most dramatic findings (Climatewire, June 10).

He even used a meeting with Group of Seven environment ministers in May in Metz, France, to lodge a protest. He added language to the meeting’s joint statement pledging the United States "to re-examine comprehensive modelling that best reflects the actual state of climate science in order to inform its policy-making decisions."

Three months later, the Trump administration hasn’t explained how this reexamination would occur. While Wheeler continues to make public statements, EPA hasn’t taken an official position on the "extreme scenario" — known in climate modeling circles as Representative Concentration Pathway 8.5, or RCP 8.5. Nor has it said whether the scenario will be used in future editions of the NCA. Gunasekara said she wasn’t aware of any specific plans.

The U.N. Intergovernmental Panel on Climate Change has used the scenario for more than a decade to chart outcomes from relatively high levels of fossil fuels consumption leading to warming of nearly 9 degrees Fahrenheit by 2100. It also assumes low levels of economic growth and technological advancement.

It’s the high end of a range of four scenarios used in the NCA and supports some its most startling findings (Climatewire, Nov. 26, 2018).

But climate scientists say it’s not unrealistic. The scenario assumes the world will use 20% less fossil fuels by the end of the century. A report last year by University of Illinois, Urbana-Champaign, and Yale University researchers published in the Proceedings of the National Academy of Sciences estimated there was a 35% chance that RCP 8.5 would prove overly optimistic.

Katharine Hayhoe, an atmospheric scientist at Texas Tech University and lead author of 2017’s NCA chapter on climate modeling, pointed to the section’s "very high confidence" finding that global emissions over the past 15 to 20 years have been consistent with the "higher scenarios."

"The only thing that will move us off an RCP8.5 pathway is sustained investment and/or policies that will accelerate the transition from fossil fuels to clean sources of energy and encourage solutions like reforestation and regenerative agriculture that restore carbon to the soil and biosphere," she said in an email.

EPA did not respond to E&E News’ requests to interview Dunham or other OAP personnel.

Gunasekara said that in response to "probing questions" from herself and Wehrum last year, technical staff under Dunham said the IPCC was reviewing whether to use RCP 8.5 in its own future work.

"It’s a conversation that’s percolating among the scientists domestically and internationally in terms of what’s the best scenarios for assessing future climate outcomes," she said, declining to offer names. Wheeler has made similar statements about the IPCC, also without providing a citation.

Gunasekara also suggested that future editions of the NCA might use new models that are tailored to reflect U.S.-only climate outcomes.

‘You need to be in this meeting’

Wheeler has made "extreme scenarios" a regular part of his stump speech for nine months now. His predecessor, Scott Pruitt, was also briefed on the utility of tweaking models to produce milder climate projections.

When Oren Cass, a senior fellow at the right-leaning Manhattan Institute, met with Gunasekara and three other top EPA political officials in July 2017, climate models and economic analysis appear to have been on the agenda. In an email setting up the meeting, Adam White, a research fellow at the Hoover Institution, told Pruitt’s policy chief, Samantha Dravis, and chief of staff, Ryan Jackson, that Cass wanted to offer advice as Pruitt set up his "red team, blue team" review of government science reports.

"Specifically, he wants to urge you that one of the most valuable things you could do is to study the ‘baselines’ that are being used to forecast potential emissions trajectories; this is a huge shortcoming of current science and is being badly mischaracterized/misused," said White in emails released under a Freedom of Information Act request by the Center for Biological Diversity. "An EPA analysis of it would be hugely valuable."

Cass and White got a warm welcome at EPA.

"Both of you need to be in this meeting," said Dravis in an email to policy official Brittany Bolen and Gunasekara, who responded that she’d met Cass when he testified before the Senate Environment and Public Works Committee at the invitation of her former boss, Sen. Jim Inhofe (R-Okla.).

Gunasekara and White, who also attended the July meeting, said Cass touched on climate modeling but focused more on flaws he sees in economic modeling related to climate change. Cass and the Manhattan Institute dispute that they reject mainstream climate science.

Cass later met with then-White House energy adviser Mike Catanzaro, telling him in a heavily redacted email that "given the administration’s interest in reviewing/revisiting issues in climate science, I had a few thoughts."

While the "red team, blue team" effort collapsed in late 2017, Cass personally met with Pruitt in early 2018 to brief him. Cass declined to be interviewed for this story.

In written testimony from the November 2015 Senate EPW hearing, Cass dismissed a suggestion that warming could reach 4.5 degrees Celsius by 2100 under a business-as-usual scenario. He quoted a 2014 IPCC working group report to support his point.

"The RCP 8.5 pathway has higher emissions than all but a few published baseline scenarios," states the "Mitigation of Climate Change" report.

But a few lines above Cass’ quote, the same report states: "Although most baseline scenarios project a deceleration in emissions growth, especially compared with the rapid rate observed in the past decade, none is consistent in the long run with the pathways in the two most stringent RCP scenarios (2.6 and 4.5), with the majority falling between the 6.0 and 8.5 pathways."

The first two scenarios — which assume a speedy decarbonization aided by technological advancements and economic growth — appear in the NCA. In fact, last year’s edition used 4.5 to 8.5 as its central range.

The moderate RCP 6.0 scenario equates to 3 to 4 C of warming by 2100. RCP 8.5 means 5 C. In other words, the U.N. climate body says the temperature warming scenario Cass dismissed encompasses most baseline scenarios.