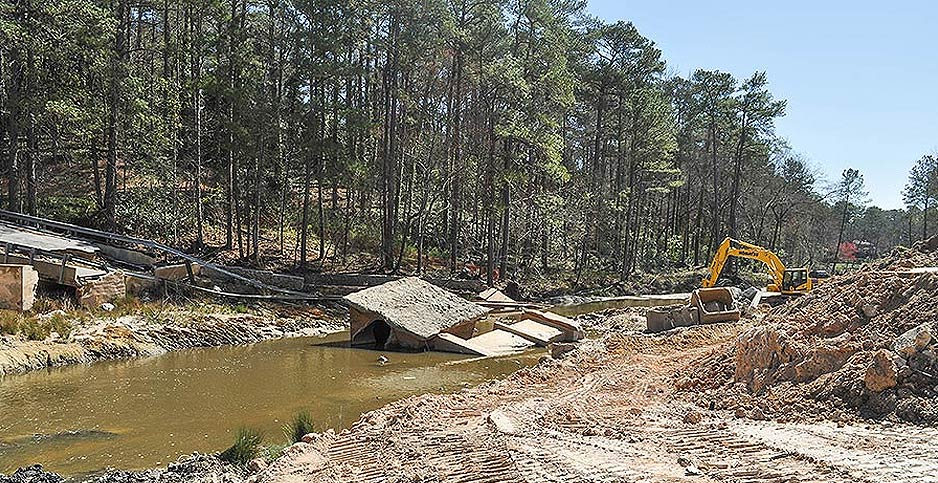 The Cary Lake Dam near Columbia was one of 51 dams that failed during October 2015 floods in South Carolina. Jeremy P. Jacobs/E&E News

As Hurricane Florence barrels toward the East Coast, state regulators are rushing to safeguard a historically fragile piece of the Carolinas’ infrastructure: dams.

North Carolina and South Carolina have been home to some of the most significant recent dam disasters due to hurricanes and major rain events.

In October 2015, torrential rains in Columbia, S.C., caused 51 dams to fail. A year later, Hurricane Matthew made landfall on the South Carolina coast, and another 25 dams breached.

Matthew had a similar impact on North Carolina as at least 17 dams gave way.

Those disasters caused tens of billions of dollars in property damage, and dozens of lives were lost.

But there was a silver lining. Those disasters led the states to beef up their dam safety regimes.

"This keeps happening to them, so they have ramped up their staffing and they have quite a bit more budget," said Mark Ogden of the Association of State Dam Safety Officials, referring to South Carolina.

"There is good reason to believe that they are a lot more prepared and ready for this type of event," Ogden said.

South Carolina’s program underwent an extreme makeover after the 2015 and 2016 storms. As recently as 2010, the Department of Health and Environmental Control’s Dams and Reservoirs Safety Program had just one full-time employee that was responsible for the state’s roughly 2,400 dams.

Like most of the country’s 90,500 dams, most of South Carolina’s are relatively small — less than 25 feet — and privately owned. But even those dams, which are frequently used to create recreational lakes, can cause major damage.

Dams are given a hazard rating based on how destructive a failure would be. "High" means a breach would result in the loss of life. "Significant" indicates major property damage but no fatalities.

In the 2015 storm, a series of earthen structures broke open sending a deluge down the Gills Creek watershed northeast of Columbia. In some cases, the owners of the dams didn’t know they were responsible for them. In others, the state couldn’t find the owner.

The program has worked to make sure all dams have an emergency action plan, or EAP, which set out what to do when hurricanes like Florence hit.

According to the Army Corps of Engineer’s National Inventory of Dams, nearly all of South Carolina’s high and significant hazard plans have EAPs, which is unusual.

The Association of State Dam Safety Officials is, coincidentally, holding its annual dam safety conference this week in Seattle. Ogden said South Carolina’s team, which is highly regarded because of the strides they have made, didn’t come. They stayed home to prepare for the storm.

Earlier this week, the department directed dam owners to check their dams and begin lowering water levels to make room for rain from the upcoming storm.

"Owners of reservoirs with functional gates or flashboards should consider operating them to provide additional storage for the anticipated rainfall," said Jill Stewart, director of the state’s dam safety program, in a statement.

North Carolina is taking similar precautions. Ogden said the Tarheel State has had a robust dam safety program for several years, with more than 20 employees and a roughly $2.2 million budget. Those officials left the conference early this week.

Ogden cautioned that those numbers are slightly outdated and that North Carolina has made strides in recent years to improve them. He said that roughly half of the state’s high hazard dams now have the plans and the state has implemented new safety requirements.

"But it’s still a concern that some their dams don’t have them," he said.

Bridget Munger, a spokeswoman for North Carolina’s Department of Environmental Quality, said their Dam Safety Program is working to prepare dam owners for the hurricane.

The program has personnel in seven regional offices monitoring dams that have been identified as having structural or other deficiencies, or undergoing repair and construction.

They have also been contacting dam owners and, like South Carolina, telling them to consider lowering water levels.

"As with Hurricane Matthew [in 2016] and severe storms before that, DEQ personnel are prepared to respond immediately should a dam emergency occur," Munger said.

There are also a few dams potentially in Florence’s path that are federally controlled. The Army Corps of Engineers operates no dams in South Carolina, but has three in North Carolina — the Falls Lake, B. Everett Jordan and W. Kerr Scott dams — as well as two in Virginia and one in Maryland.

The Army Corps "has fully-engaged teams actively monitoring and managing these dams to make as much water storage available as possible," spokesman Pete Pierce said in an email. "These dams reduce the risk of downstream flooding, but do not eliminate it. Risk remains from the potential massive rainfall and flooding downstream from other drainage areas not associated with the dams."

Of course, a robust dam safety program and these precautions don’t mean the expected record precipitation and wind from Florence won’t overwhelm dams. Last year, Hurricane Harvey caused two dams near Houston to overflow for the first time in their history, though the dams technically did not fail.

And Hurricane Maria caused a failure of a spillway at Puerto Rico’s 90-year-old Guajataca Dam, forcing the evacuation of 70,000 downstream.

Environmental groups such as American Rivers have said the recent disasters in the Carolinas show that outdated and unsafe dams should be removed and that state dam safety laws and programs need to be even further strengthened.

Michael Connor, former deputy secretary of the Interior Department and Bureau of Reclamation commissioner, said communication between state and federal authorities will be key.

"The potential record levels of precipitation will pose an incredible test for infrastructure in the Southeast and Mid-Atlantic areas, particularly dams in the region," Connor said.

"Coordination between federal, state, & local authorities on how these facilities are being operated throughout this event, and whether there are any safety issues given the extreme nature of the event, is another critical aspect of governments’ overall response to the hurricane," he said.