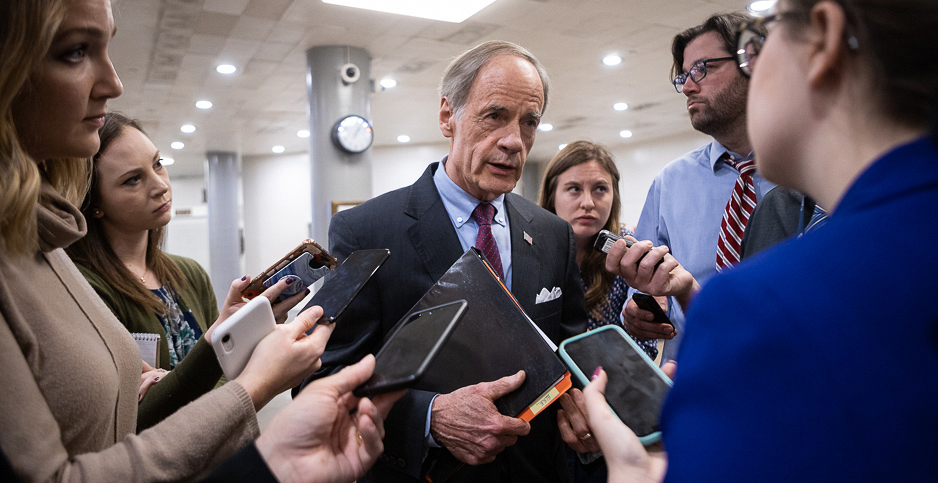 In recent days, Sen. Tom Carper (D-Del.) has railed against EPA’s plans to give the wood stove industry a roughly six-month reprieve from stricter emissions standards.

But in September 2018, Carper dangled an even more generous break — a year — as part of a broader counterpart to Republican legislation, records show.

The measure was quickly squelched by the Senate Environment and Public Works Committee, where he serves as ranking member.

In a statement yesterday, Carper called his bill a compromise floated in response to industry fears that have since turned out to be unfounded.

But the episode is getting reaired as Carper now denounces EPA’s proposed "sell-through" extension to allow retailers to keep selling out-of-compliance stoves and other wood-fired heating products to the end of November.

Sen. Shelley Moore Capito (R-W.Va.), noting that Carper had proposed a yearlong extension, appeared to tweak him about it at a Wednesday EPW hearing. Earlier in the week, the head of an industry trade group flagged the 2018 measure in a letter to committee members endorsing the EPA plan.

The 2015 Obama-era emissions standards for new wood-fired home heating appliances were the first update in more than a quarter-century; they carried a two-stage, five-year compliance timetable, with the final requirements taking effect last week.

Stove manufacturers and retailers spent years lobbying for a blanket delay to that final deadline. They also sought the sell-through extension that would allow appliances that didn’t meet the tighter standards to be legally sold after last week.

In March, after taking more than a year to ponder the issue, EPA regulators opted against leniency on the grounds that the industry hadn’t made its case.

Earlier this month, however, they pulled an about-face and proposed the November sell-through on the basis that it’s needed to address the "commercial disruption" resulting from the COVID-19 pandemic.

The draft rule is set for publication in today’s Federal Register. Because the final version probably won’t be out until late this summer, EPA is meanwhile promising to wield a light hand on enforcement.

Carper’s office released a staff report blasting the proposal as part of a "pandemic of pollution" unleashed by the agency in the face of the COVID-19 crisis, ahead of a visit before the committee by EPA Administrator Andrew Wheeler (E&E Daily, May 20).

"Think about that," he said.

In 2018, by contrast, Carper and other EPW Democrats described his legislation as a "common sense compromise" that would afford regulatory relief to retailers.

Besides the proposed one-year extension, the bill would have codified the stricter 2015 emission standards and created a $75 million federal program to replace older wood-fired appliances with cleaner-burning models.

Carper offered it as an alternative to a Capito bill that would have rolled back this month’s final compliance deadline until May 2023 (E&E News PM, Sept. 18, 2018).

On an 11-10 party line vote, committee members voted the substitute down and then approved Capito’s measure, which ultimately died in the full Senate.

Siding with Republicans at the time was the Hearth, Patio and Barbecue Association, which opposed the substitute because of the codification language.

In yesterday’s statement, Carper said he offered the one-year sell-through in part because retailers were concerned there wouldn’t be enough stoves and other "heaters" capable of meeting the final emission limits.

"Today, we know the industry fears were unwarranted," Carper said. In previously rejecting the industry’s bid for leniency, he said, EPA found that there are plenty of models that meet the final standards, as well as retailers ready to sell them.

Also assailing the new proposal is former acting EPA air chief Janet McCabe, who oversaw development of the 2015 standards during the Obama administration.

"It’s especially ironic that the reason this extension is being granted is the economic fallout of a disease that places the lives of people with compromised lungs in jeopardy," McCabe wrote in an op-ed published yesterday on the news website InsideSources.

Capito, in an exchange with Wheeler during Wednesday’s hearing, tucked in a wistful reference to Carper’s earlier plan.

"I could have gone for a year, but six months — if that gets the desired result, that sounds good to me."