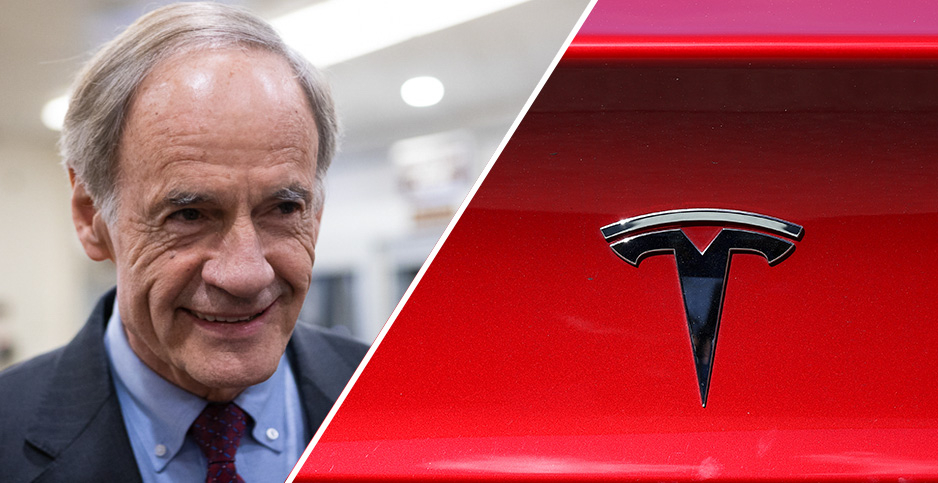 One of the Senate’s top advocates for reducing carbon pollution from the transportation sector will soon find himself behind the wheel of his own electric vehicle.

The car, which the company says has an EPA estimated range of 326 miles per charge and a top speed of 135 miles per hour, will replace Carper’s 2001 Chrysler Town & Country minivan.

That vehicle has become somewhat of a legend in Carper’s orbit, carrying him across Delaware for his four successful Senate campaigns and making cameos in newspaper profiles and on local television.

In 2019, he marked the minivan’s 500,000th mile by driving it around the racetrack at the Dover Speedway. Last weekend, Carper lit up the internet when he was photographed shirtless outside a Delaware gas station while filling up the minivan.

These days, Carper isn’t sure how many miles he’s driven the minivan. "The odometer crapped out about a year ago, at 535,000 miles," he told E&E News this week. "And it still runs great."

Carper, who has been talking about the Tesla all week, has long been an advocate for both electric vehicles and reducing carbon emissions from the transportation sector through tax breaks and fuel economy standards.

Carper said he first saw an EV a decade ago at the Detroit Auto Show. "The car of the year was a Chevrolet Volt, and it got 38 miles to a charge," he said. "The Tesla Y that I’ve ordered gets to 326."

For the Y, Tesla touts potential savings of $4,300 in gasoline costs over six years on its website.

Eligibility for Tesla purchasers was eliminated last year under the law’s schedule. That may change under clean energy tax bills offered by Democrats in both chambers, which would lift the cap.

Republicans, who have chafed at Biden’s EV dreams, have long complained that the federal EV credit rewards wealthy consumers.

Carper — who frequently takes Amtrak between Washington and Delaware, much as Biden did when he was senator — will have to wait a bit to get behind the wheels of his Tesla; the company’s website estimates a September delivery for the Y. That gives the senator some time to sell his wife on his color choice.

"My wife said, ‘Why would you order a red car?’" he said. "She’s been dying for me to get a new car, and I said, ‘Honey, I can’t believe you’re complaining that I ordered a red car. I just thought you’d be happy I’d order anything.’"

Of the now infamous gas station picture, he quipped: "I don’t think she’s seen it yet, so keep it quiet."