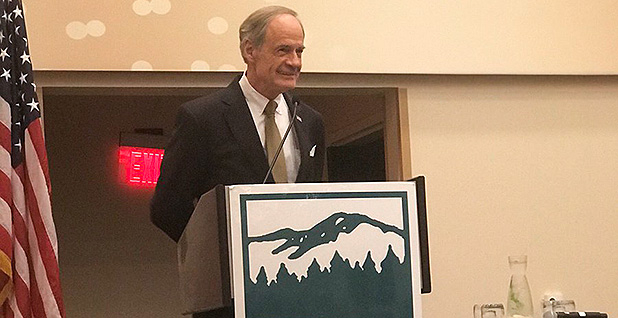 "States sometimes don’t have what it takes to keep their water drinkable, their air healthy and their climate viable," Carper told a lunchtime audience during a four-day conference of the Environmental Council of the States (ECOS). "As hard as it is for me as a former governor to admit, sometimes states just need some help — EPA’s help."

ECOS represents the heads of state environmental agencies. In comments last fall on the Trump administration’s proposed rollback of Obama-era vehicle tailpipe standards, the group went on record in support of California’s long-standing waiver to go beyond EPA requirements in setting its own emissions standards.

Carper, who served two terms as Delaware’s governor before winning election to the Senate, applauded that endorsement, while then noting EPA’s role in helping to curb power plant emissions that contribute to pollution problems in downwind states.

Carper is now the top Democrat on the Senate Environment and Public Works Committee. He spoke for about 20 minutes to more than 150 attendees. In the course of his remarks, he also voiced appreciation for the principle of cooperative federalism.

But under President Trump, Carper added, he saw many instances "where cooperative federalism in respect to states’ rights doesn’t mean the same thing to this administration as it does to those of you who are actually doing the work of environmental protection."

As evidence, he cited the possibility that Trump could soon attempt to limit states’ authority to approve or deny permits under Section 401 of the Clean Water Act. The president is traveling to Texas tomorrow to sign two executive orders intended to promote the oil and gas sector. Although it’s unclear what the orders will say, energy industry groups are seeking such restrictions.