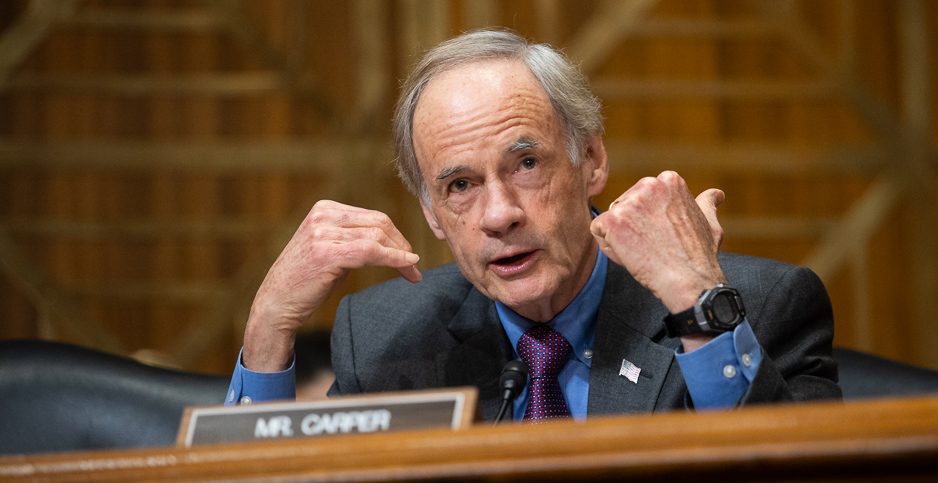 The letter, which is dated Feb. 26 and was released by EPW Democrats this morning, alleges that EPA career staffers have raised serious concerns about both proposals.

Under Section 307 of the Clean Air Act, EPA political appointees are supposed to send those concerns to the White House Office of Information and Regulatory Affairs, which is supposed to include them in the publicly available rulemaking docket.

But according to Carper, EPA political appointees have tried to hide the concerns from the public by neglecting to send them to OIRA, potentially running afoul of the Clean Air Act and other rulemaking requirements.

"I have been informed by multiple sources that EPA political officials appear to be trying to conceal EPA comments that are critical" of both rulemakings, Carper wrote.

The information from these sources points to "troubling and seemingly purposeful efforts to avoid the standard processes associated with proposing and finalizing rules, some of which may be unlawful," he added.

The letter provides an early test for O’Donnell, who was sworn in as EPA IG in January (Greenwire, Feb. 11).

Asked for comment, EPA spokeswoman Molly Block said in an email: "EPA follows the law when developing and proposing rules and regulations. We will work with the IG should they decide to investigate."

The rollback of clean car standards, formally known as the Safer Affordable Fuel-Efficient (SAFE) Vehicles Rule, is a joint rulemaking between EPA and the Department of Transportation.

DOT’s National Highway Traffic Safety Administration said in an email, "The Safe Vehicles Final Rule marks the culmination of over a year of close collaboration between EPA and NHTSA. The SAFE Vehicles Rule considers and responds to hundreds of thousands of public comments and incorporates extensive scientific and economic analyses from NHTSA and EPA experts."

Carper wrote that his office had learned of several "irregularities" associated with the preparation of the draft final rule sent to OIRA in January.

In particular, the Democrat wrote that "DOT appears to have been the sole agency" that wrote the draft final rule, despite its characterization as a joint EPA-DOT effort.

"EPA career experts had not seen roughly two-thirds of the analysis included in the draft final rule in any form whatsoever until interagency review commenced," he wrote.

Carper also said his office had learned that EPA career employees were instructed to submit hard copies of their feedback on the final rule to DOT, rather than submitting electronic copies to OIRA.

"This has been described to my office as unprecedented by people with decades-long familiarity with the EPA rulemaking process," he wrote.

Carper concluded that these developments could represent a violation of the Clean Air Act as well as Executive Order 12866, a Clinton-era directive aimed at improving the regulatory process.

‘A lot of bad press’

EPA career staffers have been deeply critical of the car rules rollback in the past, leading to negative media coverage for the agency.

In August 2018, when EPA and DOT sent the proposed rule to OIRA, the rulemaking docket included several critical comments from EPA career employees.

In particular, EPA career staffers pushed back on DOT’s argument that the rollback would increase safety on the nation’s roads by preventing thousands of fatal car accidents.

Bill Charmley, a career staffer in EPA’s Office of Transportation and Air Quality, emailed a memo that said: "The proposed standards are detrimental to safety, rather than beneficial as suggested" (Climatewire, Aug. 15, 2018).

In an extraordinary move, EPA career employees also asked for the agency’s logo to be removed from the preliminary regulatory impact analysis.

"This Preliminary RIA is a work product of DOT … and was not authored by EPA," they wrote. "EPA’s name and logo should be removed" (Climatewire, Aug. 16, 2018).

Since the rulemaking docket was publicly available, several media outlets reported on these negative comments from EPA career staffers.

Carper’s letter included footnotes to several of those news stories by publications including E&E News, The New York Times and The Atlantic.

"When the proposed rule came out, the administration got a lot of bad press because it was revealed that EPA career staff deeply and fundamentally disagreed with DOT’s analysis," said Amit Narang, regulatory policy advocate at the left-leaning watchdog group Public Citizen.

"So what’s happening here is an attempt to ensure that none of the criticisms being made by EPA career staff on the final rule is made public and makes the administration look bad," he said.

Narang said he thinks it’s imperative that the EPA IG conduct the investigation "because it’s of such a serious nature in terms of the deliberate attempt to deceive and hide these EPA career expert comments from the public."

As first drafted almost two years ago, the science rule, formally dubbed "Strengthening Transparency in Regulatory Science," would limit EPA to using studies based on data that is transparent and reproducible when crafting major new regulations. The proposal rule, which EPA is still struggling to complete, has been enormously controversial.

As E&E News reported in 2018, OIRA’s review of the proposal lasted less than a week. The White House also backdated an official timeline that initially showed that then-EPA Administrator Scott Pruitt signed the proposed rule before the review was complete (Greenwire, April, 26, 2018).

In response to questions from Sen. Maggie Hassan (D-N.H.) and other lawmakers, Neomi Rao, then the head of OIRA, later blamed the episode on a clerical error but wouldn’t explain the reasons for the unusually swift turnaround (E&E Daily, July 18, 2018).

Rao is now a judge on the U.S. Court of Appeals for the District of Columbia Circuit. OIRA’s parent agency, the Office of Management and Budget, has not yet substantively responded to a May 2018 Freedom of Information Act request from E&E News for records related to its handling of the draft rule.

In his letter, Carper cited the backdating episode as one of several "notable procedural problems." He also wrote that EPA had failed to consult with its Science Advisory Board and did not comply with Section 307 by including "all data, information and analysis" used to develop the proposal in the rulemaking docket.

"However, I have learned that much like the SAFE vehicles rule, the finalization of this supplemental proposed rule is not occurring using standard intra- and inter-agency processes," Carper wrote O’Donnell. "My office stands ready to provide yours with additional details verbally."