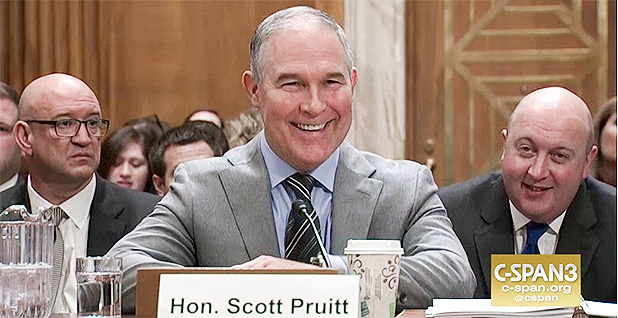 Pruitt testified before the Senate Environment and Public Works Committee this morning, his first time before the panel since his confirmation hearing in January 2017. Ranking member Tom Carper (D-Del.) pressed the EPA chief to meet more often with lawmakers in a public forum.

"You can do better, and it’s important that you do," Carper said, noting Pruitt’s predecessors in the Obama administration had come before the committee several times.

Pruitt defended how he has run the agency over the past year, emphasizing his focus on the rule of law, process and federalism, with EPA partnering with states.

"I don’t believe environmental protection is putting up fences," Pruitt said in his opening statement, in which he also asked for senators’ help on his "war on lead" to eradicate the toxin from drinking water.

Barrasso heralded job growth under the Trump administration as Pruitt has addressed the agency’s regulations.

"Administrator Pruitt, the reward for good work is often more work, and I don’t need to tell you that we’ve got a lot of work left to do," Barrasso said.

Pruitt was pressed repeatedly for short answers from Democrats on several issues. In turn, the EPA administrator tried to offer longer responses, often leading to interruptions and cross-talk.

Carper asked Pruitt whether the agency had conducted a health analysis or studied which facilities would emit more pollution related to the EPA chief’s move to end the "once in always in" Clinton-era policy that targeted industrial air pollution.

"These are not yes-or-no answers. I have to explain what we did with that decision," Pruitt said.

Carper also asked Pruitt whether he would ax the agency’s endangerment finding concluding that carbon dioxide and other greenhouse gases were harmful to human health and welfare by contributing to climate change. That finding has been the basis of the agency’s climate rules.

"There is no decision or determination on that," Pruitt said.

Other Democrats looked to poke holes in Pruitt’s tenure so far at EPA.

Sen. Tammy Duckworth (D-Ill.) noted the Trump administration has proposed to cut funding for an agency lead reduction program. In addition, Pruitt has moved slowly toward revising a rule intended to limit the amount of lead and copper in drinking water.

"This does not sound like a war on lead," Duckworth said.

That exchange prompted a quip from Sen. Jim Inhofe (R-Okla.), a Pruitt ally.

"I get the impression they don’t like you," Inhofe said, eliciting laughs from the audience.

"Do you recall saying that?" Whitehouse said.

"I don’t, senator. I don’t echo that today at all," Pruitt said.

Senators also asked about issues important to their constituents. Sen. Deb Fischer (R-Neb.) asked the EPA chief for a timeline on the agency’s rewrite of the Waters of the U.S. rule, which has sparked a backlash from farming groups.

"We are providing regulatory certainty because we are taking steps to provide a substitute for WOTUS," Pruitt said.

Pruitt said he expects EPA will propose a substitute rule in April or May this year.

Both Sens. Ben Cardin (D-Md.) and Chris Van Hollen (D-Md.) asked Pruitt about EPA’s move to end agency funding for the Bay Journal, a newspaper that focuses on the Chesapeake Bay.

Pruitt said that decision is under review.

"The decision should not have been made the way it was, so it is already under reconsideration," Pruitt told Cardin.

Van Hollen cited reporting by E&E News that found the involvement of Trump political appointees in ending the EPA grant for the newspaper (Greenwire, Jan. 4). The Maryland senator said Pruitt should keep politics out of such funding decisions.

"We should have never gotten to this point where EPA is making politically driven decisions on contracts," Van Hollen said.