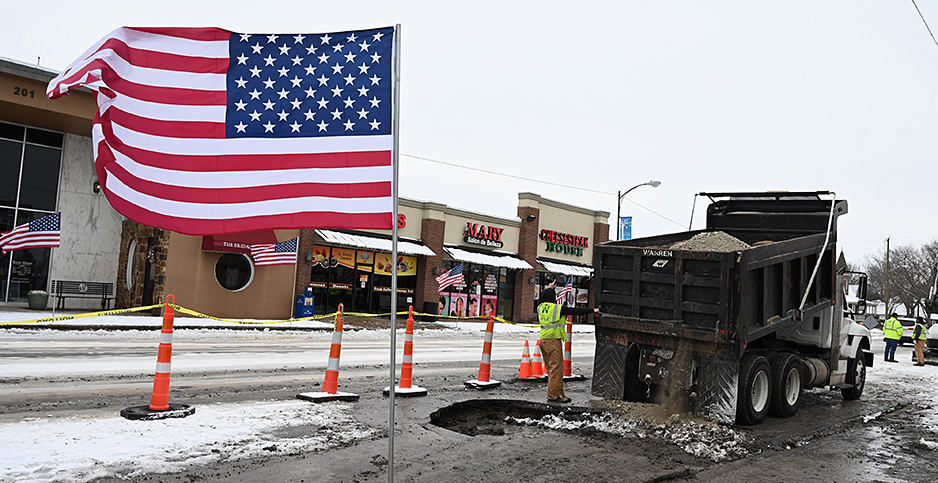 More than a week after Texas’ grid was immobilized by a historic deep freeze, triggering a cascading outage that slammed water utilities, more than 3 million people are still without clean drinking water.

In what officials there are calling a "once-in-a-generation event," record-low temperatures took hold, knocking out power and causing blackouts that froze and burst water pipes across the South, collapsing ceilings and causing flooding, misery and even death. Water distribution systems with no power saw pressure drop and were forced to issue boil-water notices to avoid contamination, while others struggled to access chemicals needed to treat drinking water.

Texas environmental regulators still reeling from the crisis are vowing to huddle with local system operators after electricity and water are restored to see what lessons can be learned.

"We’ll examine what worked, what didn’t work so well and what we can do to make things better next time — or, better yet, to prevent it from happening again," said Toby Baker, executive director of the Texas Commission on Environmental Quality.

Experts say the disaster shines a light on the preparedness of the nation’s drinking water systems, which are precariously tied to the electric grid, and their ability to withstand prolonged blackouts or disasters. In Texas, some power and water systems are required to have backup generators to handle hurricanes and maintain water pressure after losing power, but whether those plans or mutual aid agreements are sufficient is unclear, especially given the duration of last week’s outage.

"What happened from a water perspective really comes down to the energy failure," said Sarah Rountree Schlessinger, CEO of the nonpartisan nonprofit Texas Water Foundation. Schlessinger noted that all water utilities are required to have backup generators, but those resources weren’t expected to withstand a weeklong outage in the middle of subzero temperatures with roadways and supply chains disrupted.

The outage is also raising questions about climate extremes and how resilient the nation’s water sector needs to be.

"What we saw in Texas was a case of cascading failures, where when you have a climate extreme like severely cold weather, that extreme weather doesn’t just affect one infrastructure system in isolation," said Sarah Fletcher, an assistant professor of civil and environmental engineering at Stanford University. "It hammered multiple infrastructure systems at the same time."

Emily Grubert, assistant professor of environmental engineering at Georgia Tech who focuses on the nexus of water and energy issues, said situations like the one unfolding in Texas create a domino effect of problems in connected systems, made worse considering the sheer age of the nation’s water pipes.

"Even with the grid, we know we have a crumbling infrastructure problem," said Grubert. "But my sewer pipe was installed in 1911 and is made out of clay; that’s kind of horrifying on some level."

Those questions are attracting attention on Capitol Hill. A discussion in the House yesterday focused on the water sector’s ability to withstand increasingly violent weather, with lawmakers, industry and local officials highlighting the urgent need for funding to address crumbling infrastructure regardless of climate change (E&E Daily, Feb. 24).

Democratic Rep. Eddie Bernice Johnson, whose district includes Dallas, said she believes other major cities could be caught off guard and suffer similar water woes in the future.

Oluwole McFoy, the general manager of the Buffalo Sewer Authority who spoke on behalf of the National Association of Clean Water Agencies, said his company, located on the shores of Lake Erie, is focused on resilience and already seeing higher waters along the lake.

Others say that even with sufficient funds, the sheer uncertainty brought about by extreme weather swings is difficult for utilities to digest.

When the city of Lima, Ohio, crafted a plan to address sewer overflows seeping into the nearby Ottawa River, Dave Berger, the city’s mayor, told lawmakers that planners anticipated a certain number of historic storms and, therefore, gallons of pollution.

But within a year of the 2014 agreement being inked, those expectations — and the city’s $150 million investment — were literally blown out of the water.

"A year following the consent decree, we had three of those storms, hundred-year storms," said Berger, who also spoke on behalf of the U.S. Conference of Mayors. "When you do long-range planning for infrastructure and it changes on you that quick, it means you have either underspent or you have to redesign.

As the nation scrambles to pull lessons from Texas, Grubert said the same is occurring in the water sector — where oversight is even more complex.

"People are all asking about the differences we learned about Texas, but with water, we even have that turned up to 11 to some extent because municipalities often handle their own wastewater systems, sometimes together, sometimes separately," she said.

Indeed, oversight of water isn’t straightforward and differs by state.

All states except Wyoming enforce the Safe Drinking Water Act through an administrator — a state employee who implements EPA regulations, conducts inspections and makes water quality decisions. Departments of health, environment or natural resources oversee the security of public water systems, including backup generators. EPA oversees some state water programs, while utilities ensure their compliance with state and federal regulations.

On the wastewater side, oversight is somewhat similar, but each plant must comply with federal and state discharge regulations.

"A lot of these things are regulated in a very patchwork way, so thinking about it as ‘who’s in charge?’ there’s not really a [Federal Energy Regulatory Commission] or anything," said Grubert. "There’s a lot of variability around the country that makes this even harder."

Joseph Kane, senior research associate and associate fellow at the Brookings Institution, said the challenge with governance in the water sector is that it’s "highly fragmented, highly disjointed, highly siloed," and the situation in Texas has brought into stark relief that the nation’s water and power systems are likely more connected than such an oversight structure accounts for.

"I’m certainly of the belief that climate change could have contributed to this intense event," he said. "But regardless of that, the fact is there’s all this uncertainty, there’s all this risk that’s leading to a domino effect that we’re seeing expose our infrastructure governance challenges."

Even as power returns, Texans are facing a cascade of expenses from water damage and rising power bills, not to mention insurance claims.

Discussion yesterday on Capitol Hill turned to the sector’s already large challenge of the need for money, as well as a growing focus on environmental justice and equity.

The American Society of Civil Engineers recently gave America’s wastewater infrastructure a grade of D+ in its 2017 Infrastructure Report Card. According to EPA, communities report a need of $271 billion of investment over the next 20 years to bring their wastewater treatment systems to a state of good repair. David Mallino, the legislative and political director for the Laborers’ International Union of North America, told lawmakers there’s a sanitation deficit on tribal land of 1,800 projects at a cost of $2.78 billion.

Bill Sterud, chairman of the Puyallup Tribe in the state of Washington along the shores of Commencement Bay, a large inlet of Puget Sound, told lawmakers that communities in Indian Country often lack water and sanitation infrastructure, pointing to high rates of bacterial infection due to poor sanitation among American Indians and Alaska Natives.

"This is a prevalence rate that is seen in Third World countries," he said.