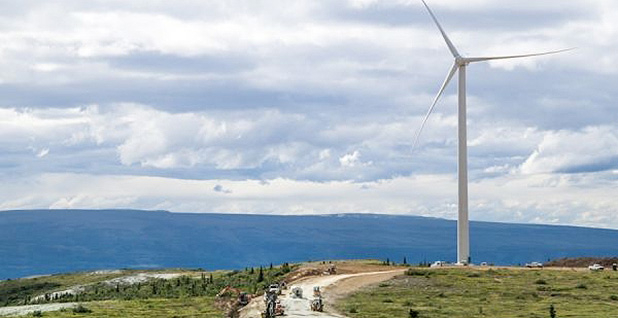 With massive fossil fuel resources but also some of the highest energy costs in the United States, Alaska is pushing to tap its equally vast supplies of renewables as quickly as possible. Signs of the push are visible throughout the state, including the Eva Creek Wind Farm, a 25-megawatt facility deep in the interior that helps power nearby Denali National Park. Photo courtesy of the Department of Energy.

FERRY, Alaska — Drive down any road in Alaska and you’re likely to eventually encounter signs of the ever-growing presence of renewable energy in the Last Frontier State, such as the Eva Creek Wind Farm.

Visible along a nearby ridge from the highway in this tiny hamlet about 30 miles from the entrance to Denali National Park, the 170-acre, 24.6-megawatt facility is the largest wind farm in the state, as well as the northernmost in North America. Completed in 2013, the $93 million project provides enough electricity to power 9,000 homes, as well as Denali’s administrative buildings and surrounding hotels, according to the Golden Valley Electric Association, which owns and operates the facility.

While Alaska has its share of big wind farms, smaller turbines used for microgeneration at homes and businesses are a more common sight, especially in isolated rural areas that have never been connected to a centralized electric grid. Rural residents in recent years have been turning to the broad array of renewable resources found in Alaska to replace the expensive — and polluting — power from diesel generators, which have historically powered rural Alaska.

Both the state and local governments have been all in to encourage the spread of renewables, which reflects the fact that Alaska’s energy costs are among the highest in the nation. In some remote villages, residents spend as much as half their income on energy and heating bills.

It’s a cruel irony for the state, which is flush with both fossil fuel reserves and enormous renewable potential from wind, solar, geothermal, biomass, hydrokinetic and tidal energy.

The state has spent heavily to wean itself off of fossil fuels. Since the creation in 2008 of a renewable energy grant program to help Alaska communities tap local renewables for heating and electricity, the Legislature has spent more than a quarter of a billion dollars on the program, which in turn has also attracted $200 million in federal and private-sector matching funds and estimated annual savings of 30 million gallons of diesel.

In 2010, the Legislature additionally established nonbinding goals of producing 50 percent of its power from renewable sources by 2025, while reducing per-capita energy use by 15 percent by 2020.

Along with complementary programs, including a similarly major investment in weatherization to upgrade the substandard housing found across Alaska and an emerging energy technology fund to support technologies not eligible for renewable grants, the state has fostered groundbreaking research in integrating renewables into existing microgrids and sustainable building designs, earning itself the reputation of a "living laboratory" (Greenwire, Sept. 9).

Chris Rose, the founder and executive director of Renewable Energy Alaska Project, a coalition of energy interests that advocates for renewable development, credits the grant program for stimulating private-sector interest in the state, which is home to about 12 percent of the world’s renewable microgrids.

"I think there’s a recognition that Alaska has a lot of experience and expertise in microgrids," he said over lunch in Anchorage last month.

But the state’s mounting fiscal crisis — the result of collapsing global oil prices — has Alaska looking everywhere to cut costs, and the popular renewable energy grants and related programs have essentially been zeroed out for the foreseeable future.

"The grant era is over for the time being," Rose said.

That’s where the federal government might be able to help — and where having a powerful ally like Senate Energy and Natural Resources Chairwoman Lisa Murkowski (R-Alaska) is sure to be an asset.

The fact that the budget woes threaten an otherwise bright area in the state is not lost on Alaska Gov. Bill Walker (I), who has spent much of his first term fighting with the Legislature over the politically unpopular steps he’s taken to ease the fiscal crisis, including delaying payment of oil and gas tax credits and slashing the annual dividend payments from the Alaska Permanent Fund (EnergyWire, July 20).

Speaking last month at the annual renewable energy expo at the Chena Hot Springs Resort outside Fairbanks, Walker noted that if Alaska were a sovereign nation, it would rank eighth in the world in natural resource wealth.

"We have an incredible opportunity with energy," Walker said.

Speaking with E&E Daily after the event, Walker conceded that the state’s deficit woes threaten its innovation streak but noted that Alaskans have a long history of adapting to adversity.

"You can keep momentum going by education, people being aware of the opportunities," he said. "So we have to fix our budget, there’s no question about that, and we will. It doesn’t mean we stop being Alaskans, and stop doing what’s happening here because we need to fix our budget."

However, Walker also noted the Senate energy bill (S. 2012) currently being conferenced with the House may help Alaska weather its cash crunch.

"We definitely are" looking to that bill, Walker said of the measure written by Murkowski and ranking member Maria Cantwell (D-Wash.), which includes multiple provisions to help state and tribal governments finance and deploy renewable and efficiency projects.

Murkowski last week noted that she, too, is worried that the innovation in her state may be hamstrung, citing research into microgrids and sustainable building design at the University of Alaska, Fairbanks, that is seen as having application far beyond Alaska’s borders.

"The opportunities that we have in so many different places, everything is just kind of ready to pop," she said. "And I don’t want to go backwards, I don’t want anything to stall out. And I’m worried about that, because if there’s nothing at the state side, the people working at the university, where are they going to go? Are we going to lose them? Are we going to lose the momentum that we’ve gained there?"

Rose singled out language in the legislation clarifying that the Department of Energy can provide federal loan guarantees to states for projects that employ innovative technologies to reduce greenhouse gas emissions as something that would be particularly helpful for Alaska. A second key provision in the bill would reauthorize DOE’s state energy program, which provides federal funds for renewable and efficiency projects.

Murkowski said both sections of the bill would help eligible Alaskan projects continue in the absence of state dollars.

"We’re trying to figure out at a time of limited federal dollars and a real serious fiscal situation at the state level how we can help to supplement in areas that will have a significant impact, I mean really leveraging these dollars," she said.

The Senate bill additionally directs the Energy secretary to establish a program to promote the development of hybrid microgrid systems for "isolated communities" — both of which Alaska has plenty of. It would reauthorize federal research into geothermal and marine hydrokinetic energy — two more renewables widely found in Alaska.

Another section of the bill would change the federal definition of Indian tribes to include Alaska Native corporations, which would allow tribes to qualify for DOE’s loan guarantee program and apply for hydropower licenses — a major source of renewable power in the state. Under the bill, tribes are also granted eligibility to apply for biomass demonstration projects and to apply directly for federal weatherization money.

"They’re looking to us on the federal side for that," she said. "That’s not only dollars for local economies, it’s a fair amount of jobs at a time when you don’t want to be losing any of these jobs."

The Senate bill additionally would establish an energy workforce pilot program that would provide grants to help train workers on new energy technologies, with an emphasis on minorities. That could benefit the many communities experimenting with renewables in remote parts of Alaska, where unemployment runs high.

"Humans are our greatest resource — not oil and gas, not our renewables," he said last month. "We need to work on ways to bring that out. If we build our human capacity, we can do anything."