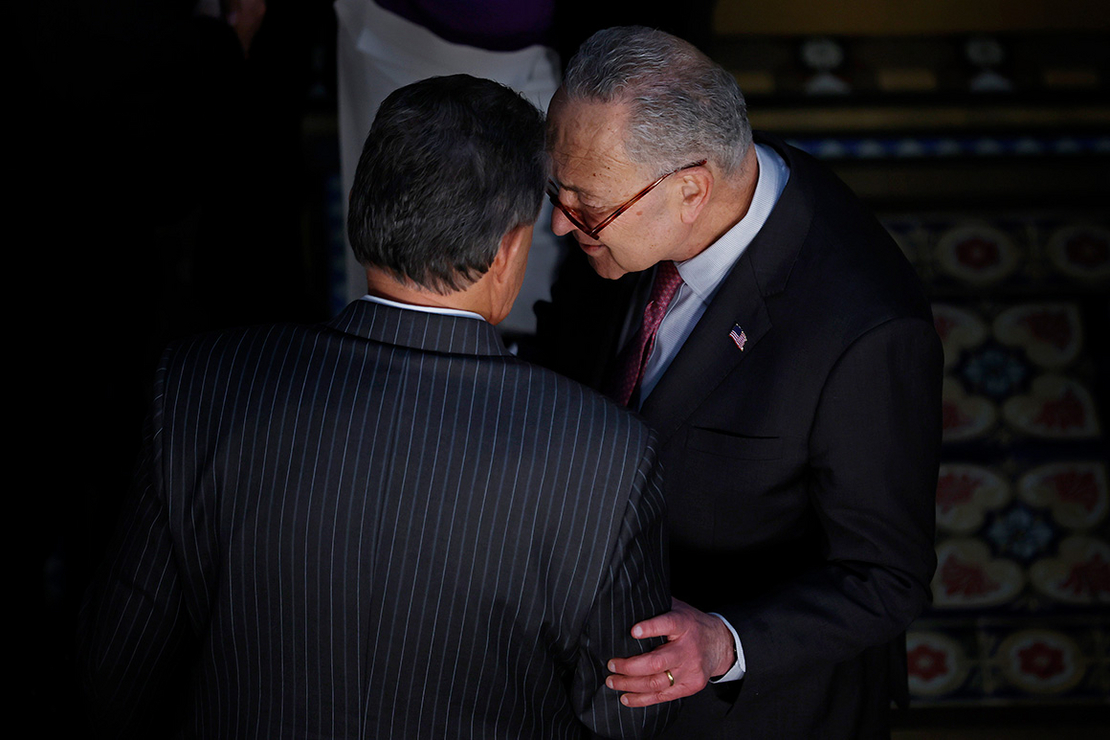 The Senate budget reconciliation deal could open the door to a green power grid, a key ingredient in slashing emissions enough to meet the country’s near-term climate ambitions.

The electricity provisions in the deal — announced this week by Senate Majority Leader Chuck Schumer (D-N.Y.) and Sen. Joe Manchin (D-W.Va.) — largely mirror the proposal laid out in last year’s failed “Build Back Better Act.” They would extend tax credits for renewables; provide new subsidies to technologies like energy storage and hydrogen; and offer bonuses to clean energy developers that pay the prevailing wage, use domestically manufactured materials and build projects in fossil fuel-reliant communities.

The “Inflation Reduction Act” also contemplates a long-term shift in how clean electricity subsidies are doled out, moving from a technology-specific standard for wind and solar to one that provides tax credits for any technology that can generate electricity without pumping greenhouse gases into the atmosphere.

The electricity provisions are particularly important to the country’s climate ambitions because most deep decarbonization studies show the power sector contributing the bulk of emissions reductions prior to 2030 (Climatewire, April 22, 2021).

“This is the thing that allows us to potentially surge forward and get on a path to our NDC targets,” said Conrad Schneider, advocacy director at Clean Air Task Force, referring to the United States’ nationally determined contribution for cutting emissions under the Paris climate accord.

The United States committed to a 50-52 percent reduction in emissions from 2005 levels by the end of the decade. When talks between Manchin and Schumer appeared to break down earlier this month, experts said the U.S. was in danger of missing its target by a wide margin. The Rhodium Group, a research firm, predicted that without congressional action, emissions would fall 25-34 percent over that time. American emissions are currently 17 percent below 2005 levels (Climatewire, July 14).

In a preliminary analysis released Tuesday evening, Rhodium said the bill would put America on track to cut emissions to 31 to 44 percent below 2005 levels by 2030. The research firm said the range reflected uncertainty over fossil fuel prices, economic growth and technology costs.

“Put simply, the IRA has the potential to be the biggest climate action ever taken by Congress,” the group wrote in a research note. “However, 2030 is not too far off on the horizon. Swift action in the Senate to enact the package, along with additional accelerated action across all levels of government, can help put the US that much closer to the 2030 target.”

The “Inflation Reduction Act,” which includes $369 billion in energy and climate spending, aims to slash emissions by 40 percent. The electricity provisions in the bill would put the U.S. in good shape to hit that threshold and potentially exceed it, Schneider said.

“What it is doing is reorienting the priorities of the U.S. toward building the clean energy economy and transforming the energy economy on a rapid scale not seen before,” he said.

The power of tax credits

Technologies like wind and solar are readily available and commercially competitive to fossil fuels. This makes transitioning electricity to clean energy an achievable goal — and the target of policies to reach near-term climate ambitions.

Some other sectors of the economy, like industry, lack commercially viable green alternatives. Others, like transportation, have alternatives in the form of electric vehicles but face a stock turnover challenge. People tend to drive their cars for years before buying a new one.

Clean electricity can further aid the decarbonization of the economy by providing a way to green transportation and space heating. That is why climate efforts at the state and federal level have long focused on curbing emissions from power plants, the second largest source of greenhouse gases in the U.S. after transportation.

Power-sector emissions declined by roughly a third between 2005 and 2021, according to EPA data, driven by a combination of federal tax credits for wind and solar, state action, cheap natural gas, falling renewable costs, and coal retirements.

But efforts to rein in power-sector emissions further have a tortured history in Washington.

A cap-and-trade bill died in 2009. A plan to pay utilities to adopt clean technology, and penalize those who didn’t, was stripped from “Build Back Better” last year in the face of opposition from Manchin. That left clean electricity tax credits as the primary vehicle for deep near-term emissions reduction.

The tax credits for zero-emitting electricity sources in the “Inflation Reduction Act” largely follow the model laid out in “Build Back Better.”

The new bill would essentially extend the existing clean energy tax credits through 2025. Like “Build Back Better,” it would provide a base payment for the production tax credit (PTC) historically used by wind facilities and the investment tax credit (ITC) available to solar and other renewable sources.

The base payment for the PTC — adjusted for inflation — is about 0.6 cent per kilowatt-hour, rising to around 2.6 cents per kWh for developers that pay a prevailing wage and offer apprenticeship programs. Two additional bonuses are available to developers that use domestically built materials and site their facilities in communities where a sizable percent of the population is employed by the fossil fuel industry. The maximum PTC would be roughly 3.1 cents per kWh when factoring in all the bonuses. The bill would also offer production tax credits to nuclear and hydrogen generators.

The base ITC rate is 6 percent of a project’s cost, rising to 30 percent for developers that pay a prevailing wage. Two additional 10 percent bonuses are available to projects that use domestically made materials and are located in low-income or fossil fuel-reliant communities. The maximum ITC would be 50 percent.

There is another important detail: Solar projects would be able to qualify for the PTC starting next year. The industry has long advocated that move, arguing that solar developers should be able to choose which credit best fits their needs.

“We are thrilled with the size and scope and the significant predictability this provides our companies to plot the path forward to meet our climate goals,” said Erin Duncan, vice president of congressional affairs at the Solar Energy Industries Association, a trade group. “This is going to transform the American economy.”

The extension of the existing credits is only one element of the deal.

The “Inflation Reduction Act” contemplates a massive shift in the way clean electricity tax credits are paid out beginning in 2025. Starting that year, any electricity source that does not emit carbon dioxide will be able to choose between the PTC and ITC.

The change toward a technologically neutral standard focused on emissions reductions has long been championed by Sen. Ron Wyden, the Oregon Democrat who leads the Senate Finance Committee. “Build Back Better” also adopted Wyden’s proposal, but the “Inflation Reduction Act” would implement it sooner.

Under Wyden’s plan, the credits would begin to phase out when power-sector emissions fall by 75 percent. If they remain above 75 percent in 2032, they would remain in effect until the emissions reach that threshold.

In an interview, Wyden estimated the package of clean energy tax credits would cost around $260 billion.

“This is a fundamental change in terms of clean energy policy. No longer we’re picking winners and losers. It’s tech neutral,” Wyden said. “So it’s agnostic because you’re not going to be able to predict the clean energy possibilities because there may be completely new emission reducers 15 years from now.”

But one of the most consequential provisions concerns how the subsidy is actually paid. Renewable interests lobbied to turn the tax credit into a direct payment, saying it would free them of the need to go to the tax equity markets and speed development. But the provision was opposed by Manchin.

The change would effectively widen the pool of lenders from big banks to other entities with large amounts of tax liability.

“It is kind of a game changer,” said Lauren Collins, a partner at Vinson and Elkins LLP.

Previously, developers needed to own a project to receive a credit. But that made it difficult for developers with limited tax liability to fully access the credit. Under the “Inflation Reduction Act,” an entity without tax liability could transfer the credit to a third party that can use it.

“You no longer need a tax equity investor or your own tax capacity to monetize the credit,” Collins said.

Challenges to decarbonizing the power sector remain, even if the bill does become law. Money is important, but it takes time to site, permit and build projects, analysts noted. The bill attempts to anticipate some of those challenges.

Renewable and fossil fuel developers have long argued it takes too long to permit new projects in the United States. The bill would provide money for the federal government to hire new staff to work on permitting issues. The Department of Energy would receive $125 million to work on permitting, while the Federal Energy Regulatory Commission would get $100 million and the Interior Department would receive $150 million.

The bill would also provide $2 billion in DOE loans for transmission projects and nearly $1 billion in grants to states to help site the projects.

And as concerns about global supply chains are on the rise, the bill would offer companies incentives to build factories to supply the clean energy industry, said Harry Godfrey, who oversees domestic manufacturing policy at Advanced Energy Economy, a green trade group.

“I would argue this is the most significant industrial policy of this era bar none,” he said.

Correction: An earlier version of this story incorrectly listed the amount available for DOE transmission loans. It is $2 billion.