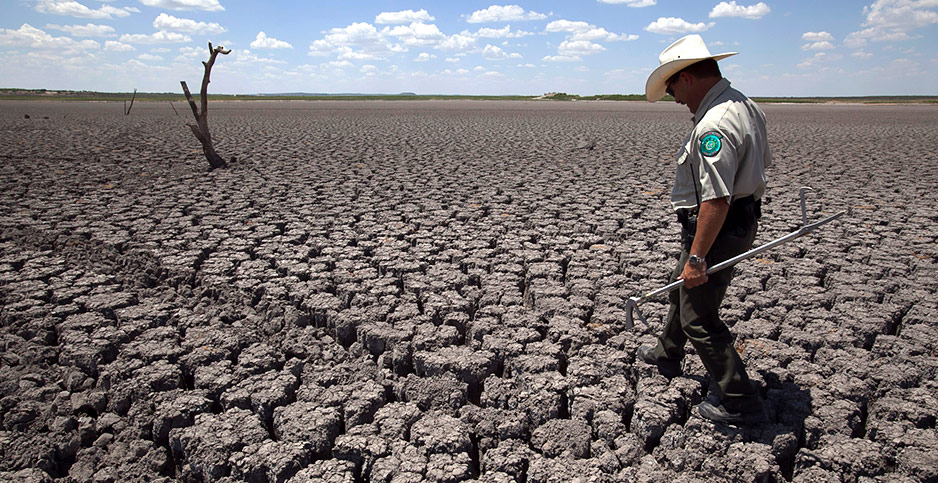 When it comes to having a historical perspective on severe droughts, Americans have lived in a bubble.

The National Weather Service didn’t get organized until 1870. What happened before then didn’t get much scrutiny, until three years ago, when the cycles of dryness recorded in 1,000-year-old tree rings were fed into computers.

The extended history was projected into the future through 17 different computer models. They predicted droughts lasting for 10 years, or longer, beginning around 2050. "It suggests we’re moving into a fundamentally different climate compared with the past thousand years," said Benjamin Cook, a climate scientist with the NASA Goddard Institute for Space Studies in New York, and the main author of the study.

"And that’s concerning, because it’s a kind of unprecedented climate state that we’ve never had to deal with," he added.

Last month, the Bureau of Reclamation announced that we may be getting a preview of this future climate in the Southwest: a 19-year-old drought that is "one of the worst drought cycles over the past 1,200 years." Brenda Burman, the bureau’s commissioner, called for seven states along the Colorado River — which supplies water to 40 million people in the United States and Mexico — to complete their drought contingency plans by the end of 2018.

Historians have evidence that people of this earlier era found one way to deal with it. They were tribes of hunters and farmers called the Anasazi, and for over 600 years, they had built a network of farms and towns with massive stone cliff dwellings or pueblos in New Mexico and southern Colorado. Some were equipped with reservoirs.

But by 1300, they had suddenly left. Most walked south to resettle along the Rio Grande. Some historians argue that they were evicted by an unknown, but fearsome, enemy. Computer models and other historians suggest that their biggest enemy was repeated crop failures, caused by what is now known as the "Great Drought." It lasted from 1276 through 1299.

The notion that such "mega-droughts" might happen more frequently in the future was so far outside recent history that state water managers and politicians in the western United States initially treated it as a kind of joke. When Roger Pulwarty was starting out as a climate scientist, he recalled some of them telling him that their plan for such a disaster "was not to have it happen while they held the jobs."

In 2005, Pulwarty, currently director of the National Integrated Drought Information System, and Donald Wilhite, a widely respected drought expert at the University of Nebraska, Lincoln, co-edited the first edition of the classic book on drought planning, "Drought and Water Crises." They wrote that the consensus of scientists then was that climate change "was probably not playing a significant role" in increasing the size and severity of droughts.

This year, the second edition of their book appeared, and the consensus of over 70 scientists who contributed to it took a sharp U-turn. The co-editors assert that the threat of droughts lasting 10 years or more has become significant. They warn that these droughts will pose a "stress test," not just for communities or states, but for national governments around the world.

In an interview, Pulwarty said the threat will launch a serious race. New tools for predicting and preparing for future droughts have emerged in the United States and around the world in recent years. Forty-seven of the 50 U.S. states have now developed drought plans. "The problem is whether our institutions and the ways we plan for the future can change at the rate at which the environment is changing," Pulwarty said.

He acknowledges that droughts are a natural part of weather variability. His nightmare is that the mega-droughts likely to accompany climate change will coincide with normal drought cycles, deepening the dryness beyond what planners expect. The tendency around the world has been for governments to hesitate until droughts become full-blown crises, and then to disgorge large amounts of money to help the victims. The assistance comes "often too little too late," according to Pulwarty and Wilhite.

They say that if governments engage earlier and proactively, their resources could be more effective. The droughts predicted by climate models will be far bigger than the United States has dealt with before, including the Dust Bowl, which lasted for 10 years in the 1930s, or the 2012 drought, which projected a dryness that affected 65 percent of the Lower 48 states. It cost between $35 billion and $70 billion, according to various estimates.

Unlike other weather events, droughts are harder to define and forecast, and the resulting damages can quickly spread from agriculture into other sectors of the economy. There was no formal national effort to track and measure their magnitude until 1999, when the departments of Commerce and Agriculture initiated the U.S. Drought Monitor at the University of Nebraska, Lincoln. Its goal is to reduce the confusion and vulnerabilities of droughts by educating taxpayers and policymakers with a weekly map and a narrative that locates droughts and divides them into five categories of severity.

Although Congress tried and failed to pass a "National Drought Preparedness Act" in 2001, 2003 and 2005, it finally came up with the National Integrated Drought Information System in 2006. Pulwarty heads it as a partnership of seven federal agencies led by NOAA from Boulder, Colo.

Lessons from Down Under

Concerns about underestimating the size and damage of future droughts stem from Australia’s recent experience with the Millennium Drought, which lasted from 1997 to 2012 and is regarded as that continent’s worst. While Australia has suffered more from droughts than any other continent, the Millennium Drought turned out to be three to four times worse than the government predicted.

"When you have a slowly drying situation and you put a major drought on top of that, what results is a surprise," said Pulwarty, who believes the underestimate gave Australians the impression they were adapting to the drought. In fact, they were steadily losing ground. In the end, the government resorted to extensive innovations during the crisis, showing people there were solutions.

Water planning during a drought is often difficult because of tension between the water users and the needs of the environment. To be sure, Australian interests indulged in a lot of that, but city, state and national governments were able to act proactively, because during the 1990s, Australia laid the foundation for one of the world’s most sophisticated water-trading systems.

It was centered in southeast Australia, where the watersheds of two rivers feed the thirsty, populous cities of Sydney, Canberra, Melbourne and Adelaide. There was a hard-won political agreement to separate the time-honored connection between landownership and water rights of farmers, and then a cap was imposed on overall amounts that could be extracted from the rivers.

During the height of the drought, Australians were able to launch a cap-and-trade system that helped less efficient farmers survive financially by selling their water rights to other farmers and to cities and the federal government. In the end, the government spent $3 billion to buy enough water to keep streams from drying up. The result was that more farmers survived a horrific 15-year drought, and the trading allowed water rights to move from one state to others that had higher needs.

Pulwarty calls the Australian experience "amazing." These supply-side efforts and the enthusiastic response of Australians to support more efficient water use, he thinks, provide valuable lessons for other nations facing the prospect of bigger droughts.

The drought that Pulwarty, Cook and other U.S. experts are focused on right now is centered in the Southwest, where the U.S. Drought Monitor reports that "a very dry winter and spring season are taking a toll on the vegetation." The Department of Agriculture reports that in Oklahoma and Texas, over 60 percent of the winter wheat crop is in "very poor condition." In north-central Arizona and central New Mexico, precipitation levels are at an all-time low or within 10 percent of it.

The critical measure of water supply in the region is Lake Mead, the nation’s largest reservoir located on the border between Arizona and Nevada. There the water level is around 1,083 feet. It is projected to reach 1,075 feet in January, a "trigger level" that would allow the Bureau of Reclamation to impose water delivery shortages on Arizona and New Mexico. In 2015 and 2016, the reservoir sunk to that level briefly but then rose again. The risk of reaching the critical level again has "approximately tripled," according to the bureau.

Farmers will likely suffer the most. Pulwarty is confident that Americans can find ways to survive longer droughts in heavily populated areas. The federal Clean Water Act and more efficient water use have contributed to a decline in U.S. water consumption since 1974. "California, as crazy as it is right now, is using less water than it did in 1970, despite a doubling of population growth," Pulwarty said.

"For the most part, we’re moving in the right direction for humans in terms of conserving water, but for the environment, we’re not," he added. Pulwarty thinks the environment is drying out faster than policies are being made to address it.

On the supply side, U.S. water laws in the West resemble the old property-rights-related system that Australians managed to reform during their Millennium Drought. Cook of NASA-Goddard points to a "use it or lose it" ethos that doesn’t inspire trading water to more efficient users. "In some cases, if you don’t use your allotment, you get punished, and your water allotment in the future goes down," he said.

California has built a substantial system of reservoirs where excess water can be stored in wet years. "In certain places, we’re approaching the upper limit of how much surface storage we can actually increase," Cook noted.

Meanwhile, in other parts of California and the West, people rely on supplies of groundwater that could be recharged in times of plenty, but usually aren’t. In the Great Plains, eight states draw from aquifers like the Ogallala that were put there by the melting of glaciers during the last ice age.

"When it’s gone, it really will be gone," Cook said.

"At the end of the day, the bigger problem is understanding the way people use water and may respond to droughts, and that’s where the biggest uncertainties are," Cook added. "In the U.S., we don’t value water at the level that we think it should be valued."