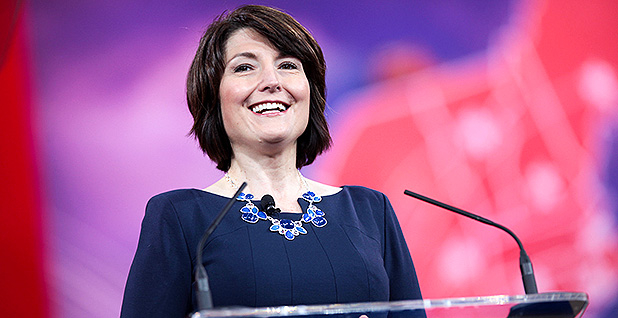 Rep. Cathy McMorris Rodgers (R-Wash.) is Donald Trump's pick to lead the Interior Department, according to a source. Photo by Gage Skidmore, courtesy of Flickr.

President-elect Donald Trump has chosen Rep. Cathy McMorris Rodgers as his nominee for Interior secretary, according to a source close to the transition.

By selecting the Washington Republican, Trump is choosing an up-and-comer in the GOP political world. She’s the chairwoman of the House Republican Conference, a native Westerner, and a member of the House Energy and Commerce Committee. She has opposed the Obama administration’s climate policies and has co-sponsored legislation to sell federal land to private interests.

It’s unclear when Trump will make a formal announcement, but his selection has already prompted criticism from environmentalists.

"Donald Trump just posted a massive ‘for sale’ sign on our public lands by nominating Rep. Cathy McMorris Rodgers for Secretary of the Interior," League of Conservation Voters President Gene Karpinski said in a statement.

"In Congress, Rep. McMorris Rodgers has consistently voted to prioritize drilling on our public lands and waters, including in sensitive areas like the Arctic, and even to open up our public lands for sale to the highest bidder," he added.

McMorris Rodgers co-sponsored legislation with Utah Republican Rep. Jason Chaffetz and others that would have required the Interior Department to sell some 3.3 million acres of land to the highest bidder to help reduce the federal deficit (E&E Daily, Oct. 26, 2011).

If confirmed, McMorris Rodgers will take the helm of a sweeping department with about 70,000 employees tasked with managing about 500 million acres of public lands across the country — about one-fifth of the land in the United States.

While Trump is widely expected to seek to rev up energy production on public lands and roll back many of the Obama administration’s energy and environmental policies, his approach to handling Interior hasn’t been as clear as his goals for other agencies, such as U.S. EPA.

Earlier this week, Trump vowed that his administration would honor the "legacy" of former President Theodore Roosevelt, asserting that his White House would protect public lands for hunters, anglers and other outdoor enthusiasts (E&E Daily, Dec. 7).

Trump promised that his administration would preserve "the legacy of Theodore Roosevelt, believe it or not, one of our great environmentalists."

Some conservation groups called McMorris Rodgers’ selection a stark move in the opposite direction.

"This week, President-elect Trump told America he wants to follow in Teddy Roosevelt’s footsteps by conserving America’s parks and public lands," said Jennifer Rokala, executive director of the Center for Western Priorities. "Cathy McMorris Rodgers, unfortunately, has shown little interest in the issues she would encounter on a daily basis as secretary of the Interior."

Rokala added that if McMorris Rodgers is confirmed, "we hope she takes her new boss’s words seriously and follows in the conservation tradition of Teddy Roosevelt, not the robber barons who would have drilled, mined and clear-cut their way across the West a century ago."

On her website, the Washington congresswoman calls for a "bold, comprehensive energy plan for the 21st century," with the basic principle "more of everything."

The website says, "By investing in American energy and reducing our dangerous dependence on foreign oil, we can lower energy prices and retake control of our economic destiny."

Eric Washburn, a former aide to Senate Minority Leader Harry Reid (D-Nev.) who now works with the lobbying firm Bracewell, said in a statement today that McMorris Rodgers’ "plate will be full from the minute she takes office," and she’ll be faced with issues including demand to drill on federal lands, renewable energy projects, pipelines and conservation concerns.

"As a representative of Eastern Washington, she has had to grapple with these challenges regularly and so knows the laws, regulations, and issues that will now cross her desk every day on the job," Washburn said. "While it is a tough and often controversial job, if you come from the West and love the wide open spaces, and the outdoor recreational opportunities afforded by the federal lands estate like hunting, fishing, hiking, off-roading and are not afraid to mix it up from time to time, then it can be one of the best jobs in Washington, D.C."

After meeting with Trump last month, Wyoming Republican Rep. Cynthia Lummis said the president-elect was well-versed in the issues the Interior Department faces.

He was prepared to talk about oil and gas, coal, water, and forest issues, she told reporters yesterday. "He knew about the bark beetle devastation of the Western forests," she said. "He knows about Waters of the U.S. and how states and local water users are concerned" (E&E News PM, Dec. 8).

Lummis said she suspects much of his expertise in hunting, fishing and the outdoors "was garnered to him through his son, Donald Trump Jr., who really is an avid sportsman and who cares a lot about these issues. So he was well-prepared." She said she also got the impression from Trump that "large-scale disposition of federal lands is not something he wants to see. So that was consistent with some of the things he had said on the campaign trail."

The retiring Wyoming congresswoman was one of several people reportedly being considered for the Interior job. Oklahoma Republican Gov. Mary Fallin was also considered a top contender for the job.

McMorris Rodgers’ exit from Congress would do little to change the makeup of the House, however, as her Spokane-based district is in safe Republican territory.

The Republican first won the seat in 2004, and she has never received less than 56 percent of the vote in each of her re-election bids.

She has likewise faced only insignificant intraparty challenges in recent cycles.

Washington state holds all-party primaries in which the top two vote-getters advance to a November runoff. In the 2016 primary, retired engineer Tom Horne — the only other Republican in a five-candidate field that included Pakootas, a Libertarian and an independent — took 11 percent of the vote.

No candidates had expressed their intention to replace McMorris Rodgers — who must still be confirmed by the Senate if she is nominated — but potential contenders could be drawn from the state Legislature if a special election is needed.

The seat claims an impressive political pedigree of its own: Former Speaker Tom Foley (D) held it until he was ousted from the House in a 1994 upset by a political novice, Republican George Nethercutt. Nethercutt gave up the seat for an ill-fated challenge to Sen. Patty Murray (D) in 2004.