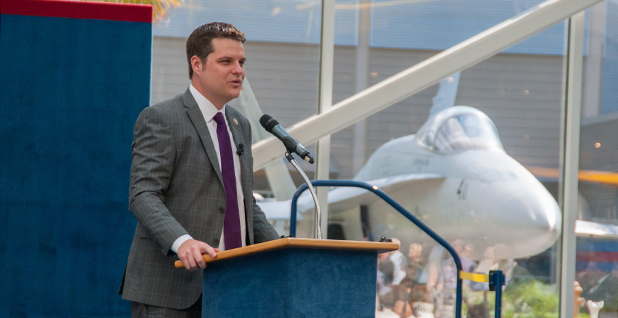 Rep. Matt Gaetz (R-Fla.), like many of the caucus’s GOP members, is somewhat lukewarm on climate action. He acknowledges global warming but is skeptical of the scientific consensus that humans are the primary factor driving it.

Earlier this year. Gaetz introduced legislation to do away with EPA, saying the federal government is not good at conservation.

Melinda Pierce, legislative director with the Sierra Club, criticized the bipartisan caucus, saying the inaction of its Republican members has rendered it useless.

"The supposed Climate Solutions Caucus is welcome to add any member they’d like — even climate deniers who propose legislation to terminate the EPA," she said in a statement.

"But, until the silent half of the caucus backs up the name of the caucus with actual votes for clean energy solutions and against the fossil fuel industry, being a member will be nothing more than a line on representatives’ resumes."

While caucus backers take a more moderate tone, opting for a big tent approach, greens and many Democrats say Republican fossil fuel defenders are using membership to greenwash their resumes.

The Citizens’ Climate Lobby, a group that pushes GOP lawmakers to join the caucus, said Gaetz’s addition is a promising development.

"Any time any Republican, no matter who they are, joins the caucus, that’s a good thing," said Steve Valk, CCL’s communications director.

"I think there’s a certain amount of urgency now that wasn’t there before," he said. "While I can’t say too much on that, I can say there are some serious discussions going on about solutions and among Republicans. I’d say, give them a little time. It will be worth our patience."

While Republicans on the Hill are reluctant to speak about climate solutions, there has been renewed talk about a carbon tax in the wake of the recent spate of hurricanes. A growing number of Republicans, conservatives and libertarians now openly support pricing carbon (E&E Daily, Nov. 1).

Valk noted that while CCL does not have an outfit in Gaetz’s district, the legislator was likely swayed to join by his Democratic counterpart, Rep. Josh Gottheimer of New Jersey.

"Who knows how that connection happened. Maybe they met at a freshman orientation and went out for a beer and found out they both like Led Zeppelin or something," Valk mused.

"Gaetz could have said, ‘No, I don’t think so.’ Gaetz is in a conservative district in the Florida Panhandle, Pensacola is basically southern Alabama. He’s got nothing to gain with his constituency by joining the caucus. We accept everybody at face value."

The caucus now boasts 62 members, with more expected to join in the coming months.