Caucus gives GOP a ‘green badge,’ but will it do anything? 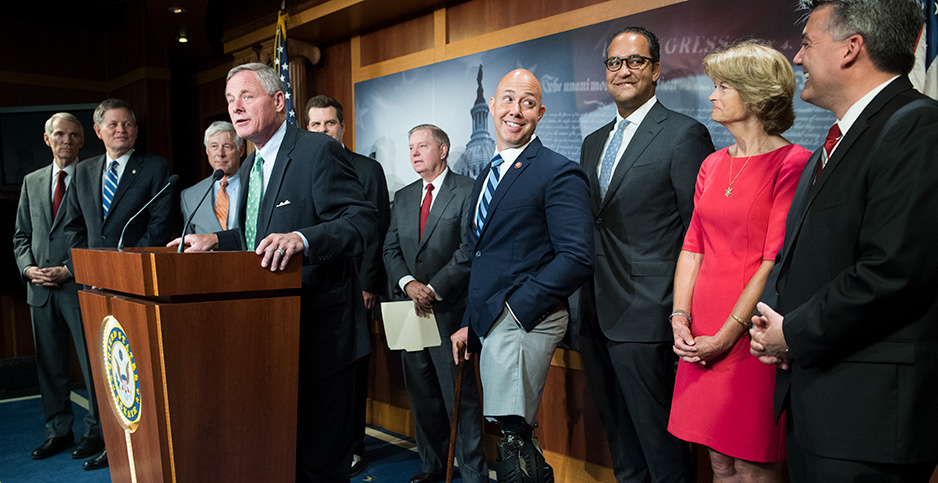 Democrats and environmental groups are skeptical that a fresh push by Republicans to highlight conservation issues will lead to legislation, and they instead worry it’s a bid to provide political cover for vulnerable GOP lawmakers.

Republican lawmakers earlier this week announced the formation of a bicameral Roosevelt Conservation Caucus that seeks to find consensus on energy and environmental issues, including clean energy research and modernizing natural parks. The caucus is named after the 26th president, Republican Theodore Roosevelt, who was an early champion of the environment.

The GOP-only caucus comes the same week President Trump gave a spirited defense of his environmental record as polls have shown most voters are dissatisfied with his party’s work on green issues.

Rep. Raúl Grijalva (D-Ariz.), who chairs the Natural Resources Committee, said Republicans are probably realizing voters prefer candidates who care about the environment and likened the group to Trump’s attempt to tout his record.

"I’m sure they’ve noticed that environmental issues, climate change, public lands is polling very well, and the American people want to protect it and get something done. And so bringing up Teddy’s name gives them a veil of conservation," Grijalva said.

"These seem to come up during election years, or leading up to tough elections, and then they disappear," he added.

Sen. Kevin Cramer (R-N.D.), a member of the caucus who attended Trump’s environmental speech earlier this week, acknowledged the president’s push caught the attention of Republicans on Capitol Hill.

"The White House certainly raised the consciousness of the issue and reminded Republicans we don’t have anything to shrink from," said Cramer, arguing that the GOP too often is on the defensive regarding climate change when it has a strong record on anti-pollution, clean water and clean air to tout.

Several Democratic lawmakers welcomed the news that the GOP is willing to create a caucus on conservation, even if they knew little about it.

"Anytime we can get my GOP colleagues talking about environmental protection and climate crisis, it’s going to be positive, but I don’t know any details," said Rep. Kathy Castor (D-Fla.), chairwoman of the House Select Committee on the Climate Crisis, who added she had heard about the RCC in passing.

Rep. Paul Tonko (D-N.Y.) said he learned about the caucus when asked about it by E&E News, but he welcomed the effort provided it made environmental policies that would be both evidence- and science-based.

Rep. Francis Rooney (R-Fla.), a co-chairman of the Climate Solutions Caucus, acknowledged caucuses sometimes attract members who are "looking for a green badge." Dozens of GOP House members joined Climate Solutions in advance of the 2018 elections to moderate their records, although many of those lawmakers went on to lose their reelection bids.

"I think the Democrats have made some very good points. If it’s just a name badge, come on. Why are you wasting everybody’s time?" Rooney said. "If you’re going to be on it, you ought to be debating, adding to the discussion in good faith, and maybe even vote for some pro-environmental things."

Sen. Brian Schatz (D-Hawaii) said the GOP’s opposition to climate action makes him skeptical much will come of the caucus. "But hope springs eternal, and I certainly applaud them for taking the first step. The question is whether it’s a meaningful one or not, and that remains to be seen," he added.

Others, such as Sen. Sheldon Whitehouse (D-R.I.), a leading Senate environmentalist, don’t expect any positive policies emerging from the caucus.

"Can’t wait to see what this group comes up with. Polluter-approved dodges and half-measures? Hiding behind the Innovation Fairy? Or something real? Place your bets," he said on Twitter.

The RCC includes numerous Republicans who are staring down reelection battles next year or who perennially fight tough campaigns in states where environmental action could appeal to swing voters.

In the Senate, it includes Republican Sens. Cory Gardner of Colorado, Susan Collins of Maine.

Caucus members Lindsey Graham of South Carolina, Steve Daines of Montana and Shelley Moore Capito of West Virginia are also up for reelection next year, although they are not expected to face battles as fierce as some colleagues.

House members in the roster include Reps. Will Hurd of Texas and Brian Fitzpatrick of Pennsylvania. Both have staked out centrist positions in numerous areas, including the environment, and consistently go through close elections.

Reps. Fred Upton of Michigan and Buddy Carter of Georgia, also Roosevelt Caucus members, could have difficult campaigns but are likely safer than Hurd and Fitzpatrick.

Each of the Republicans’ races could end up being a key to the party retaining control of the Senate or taking back the House majority.

The Sierra Club quickly denounced the caucus as yet another GOP environmental effort that is all bark and no bite.

"This greenwashing caucus won’t provide Congressional Republicans with the political cover they want until they actually vote to protect the environment, take on the fossil fuel industry, and tackle the climate crisis," Melinda Pierce, the group’s legislative director, said in a statement, pointing to votes the caucus’s members took, such as to open the Arctic National Wildlife Refuge to oil drilling and to confirm Scott Pruitt as EPA administrator.

Bill Snape, senior counsel of the Center for Biological Diversity, similarly called the effort a "political green masquerade" in an email circulated by environmental activists in Colorado this week.

But GOP members of the group insist they are among those in their party committed to developing real policies and significant legislation on environmental issues.

"There are Republicans that acknowledge global warming climate issues, and we want to work in a positive way to address them," said Upton, a former chairman of the Energy and Commerce Committee.

Daines denied that his membership in the caucus had anything to do with his reelection battle.

John Mues, a teacher and Navy veteran, entered the Montana race the day after the caucus launch, becoming the second Democrat hoping to challenge Daines. Wilmot Collins, mayor of Helena, had previous put his hat in the ring.

"I’ve been active on environmental issues — look at my history on it, on public lands and so forth — since my first day here," said Daines.

He said the caucus will work on real policy, not just exist as a label for its members.

Sen. Thom Tillis (R-N.C.), a vulnerable Republican who is not a member of the RCC, spoke in support, said one of the goals of the caucus is cutting through the narrative that the GOP does not support conservation.

He also stressed the need for finding bipartisanship on climate issues, including state partnerships, and avoiding the polarization that has surrounded the progressives’ Green New Deal.

"Why don’t we step back and kind of identify the building blocks of things we can agree on?" asked Tillis.

Below is the full list of caucus members to date:

Senate members of the RCC

House members of the RCC

Correction: An earlier version of this story incorrectly said Sen. Thom Tillis (R-N.C.) was a member of the caucus.