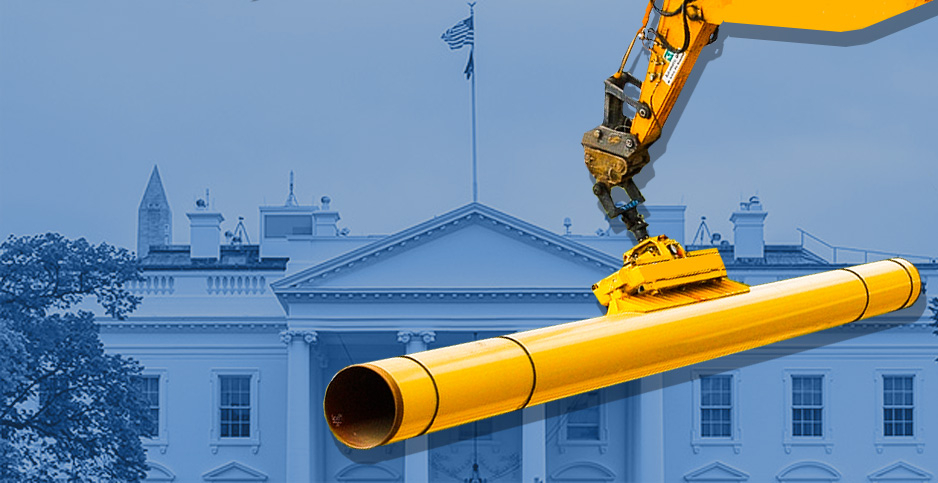 The Biden administration and members of Congress are pushing regional carbon capture “hubs” as a way to slash emissions, despite persistent concerns from environmental justice advocates about the technology.

The massive infrastructure package passed by the Senate this week,, for instance, has provisions that could help create hubs, which would link multiple carbon capture and storage projects in a region. The bill includes the "Storing CO2 And Lowering Emissions (SCALE) Act," which would support the build-out of more CO2 transport and storage infrastructure, including pipelines.

McCarthy cast carbon capture projects — and the build-out of regional hubs — as indicative of how the administration is looking to tackle climate change: by protecting the jobs of energy workers, advancing technology and investing in communities.

President Biden “is not interested in moving forward with a climate strategy that isn’t about creating good union jobs,” said McCarthy, who appeared virtually last month at an event organized by the Labor Energy Partnership, a joint initiative of the Energy Futures Initiative (EFI) and the AFL-CIO labor federation, which backs the concept of regional hubs.

She told former Energy Secretary Ernest Moniz, EFI’s president and CEO, that hubs are “not only essential to get the deployment and scale that we actually need” but an “on-the-ground, in-your-face example of what we have and how we can build it — so people can realize we’re investing in them.”

But how would CCS hubs operate? And how far could they go to cut emissions?

A CCS hub involves shared infrastructure — and a shared pipeline network — that multiple carbon capture projects in the same region feed into. Instead of having each facility that traps CO2 determine its own storage solution and build a pipeline to it, the idea is to first build a shared network of pipelines that would facilitate carbon-capturing projects to spring up around it.

Backers say the development of hubs is critical if the CCS sector is to grow at a large enough scale to address climate change. The concept could lower costs of CCS technology significantly, they say.

“If you want efficiency and cost reductions over time, you need a much larger network in terms of the CO2 transport infrastructure, because the economies of scale and transport — in this case, compressed CO2, or almost anything in a pipeline — are vastly improved if you build a larger pipe to start,” said Brad Crabtree, director of the Carbon Capture Coalition and vice president of carbon management at the Great Plains Institute.

But critics of carbon capture note that multiple projects tied to power plants and large emitters have been canceled in the past decade, raising the question of whether enough CCS projects could affordably come online to support a hub. Others say the technology would extend the life of fossil fuels rather than helping cut emissions in the long term.

“A focus on carbon capture also distracts from the work needed to advance a just and equitable transition away from fossil fuels,” said Stephanie Thomas, a researcher and community organizer with Public Citizen in Texas. “Many are interested in fighting climate change. Reducing emissions by ending fossil fuel extraction is the best way to slow the climate crisis.”

Building hubs also will require several key policy changes — and money — that will need to be passed through legislation, observers said, both to increase the number of carbon capture projects and to build out the pipeline infrastructure needed to move greater amounts of carbon dioxide.

Regardless, the hub concept is not an idea that industry is ignoring. One closely watched hub proposal, floated by Exxon Mobil Corp. in April, aims to capture CO2 from manufacturing, petrochemical and electricity generation facilities along the Houston Ship Channel and surrounding industrial areas (Energywire, April 20).

The CO2 would then be “piped into natural geologic formations thousands of feet under the sea floor,” according to Exxon.

John Thompson, technology and markets director at the environmental nonprofit Clean Air Task Force (CATF), said “if you are more serious about addressing climate change, which I think the nation is becoming, then it sort of pushes hubs further into the foreground.”

“The value of a hub is that you improve the economics of transport and storage by either minimizing the distance or increasing the size of pipelines, so that they take advantage of economies of scale, and likewise economies of scale on injection,” he said.

A June report from the Labor Energy Partnership described regional hubs as an “essential step” toward the goal of gigaton-scale emissions cuts in the United States, saying they have been a “successful tool” overseas to encourage the private sector to participate in CO2 capture from a range of emission sources (Energywire, June 30).

Lee Beck, international director of carbon capture at CATF, pointed to hubs under development in Europe and how companies — knowing that there’s a storage destination for their CO2 — have then decided to pursue carbon capture at their facilities.

In the June post, Beck said “at least three projects and one industrial cluster project cite the Northern Lights Project as a potential storage location,” referring to a carbon capture and storage project that aims to take CO2 captured from industrial sources and sequester it under the North Sea.

“When we get this kicked off, it really will demonstrate viability in a way that’s going to attract the private sector,” McCarthy said of hubs, adding the administration is “sending all kinds of signals to the private sector about how we want to rebuild our economy. And this is an essential piece of that.”

A ‘chicken and egg’ problem

Hubs are getting more attention in the United States partly because of the threat posed by the climate crisis and changing public perception about it, according to administration officials and analysts. The International Energy Agency and other organizations have produced analyses finding it’s near impossible to reach global climate targets without extensive growth of carbon capture technology.

Jennifer Wilcox, the principal deputy assistant secretary for Fossil Energy at DOE, said last month that the world is “seeing changes in climate every day” and that opportunities for hubs, in the Houston metro and in other parts of the country like the Ohio River Valley, would help to commercialize carbon capture technologies so “that they are economically viable.”

One of the biggest obstacles to the development of hubs is what some describe as a “chicken and egg” problem, where investors are unlikely to put money into CO2 capture without certainty that there will be storage for the greenhouse gas. Investors on the storage side also may not want to finance those projects unless they’re confident that a steady stream of CO2 is headed their way.

Building a large-volume, high-capacity pipeline system from the start can address that problem, but it’s difficult to get enough participants to fill that capacity from the beginning, according to Crabtree, director of the Carbon Capture Coalition.

To develop a pipeline system where capacity goes unused for a period of time — and get past the “chicken and egg” problem — Congress needs to pass legislation, namely the "SCALE Act" that moved through the Senate, according to Crabtree.

Reintroduced in March before ending up in the infrastructure package, the act was put forward by a bipartisan group of lawmakers, and includes a low-interest loan program for CO2 transport infrastructure projects and grants for initial excess capacity on new infrastructure.

That’s important because beyond the interests of companies involved, there is also a public benefit to CO2 pipelines, Crabtree said.

“This investment will pay itself back over and over again,” Crabtree said, adding “it’s just that from an upfront financing standpoint, it’s hard to do that with private capital, because that’s just not how pipelines are financed in this country.”

Hubs will still emerge over time without legislation like the "SCALE Act," but they won’t happen nearly as fast, Crabtree maintained, which is problematic considering the gravity of climate change.

Other policy changes that could help the development of hubs are updates to the federal 45Q tax credit to make it more valuable, said Thompson at CATF. The incentive, originally enacted in 2008 but reformed in 2018, provides a tax credit per metric ton of CO2 that is stored.

The value of the credit for saline storage should be increased from $50 per ton, as it is now, to $85 per ton, Thompson said.

Another sought-after change is to the credit’s “commence construction” window — or the deadline by which developers have to start construction to claim the credit — which Thompson said should be extended by five to 10 years. Projects currently have until the end of 2025 to begin construction, a change authorized by the omnibus package that passed last year (Energywire, Dec. 23, 2020).

The infrastructure package does not update 45Q but includes funding for four hubs with direct air capture, which involves pulling CO2 directly from the air rather than from large emitters like factories or power plants. The language further calls for development of regional clean hydrogen hubs, including one that would demonstrate production of clean hydrogen from fossil fuels, which could require carbon capture.

Top officials at DOE have recently said there is wisdom in developing CO2 infrastructure in places where there’s a lot of emissions sources and proximity to geologic storage sites.

However, they have also acknowledged concerns from front-line communities disproportionately affected by fossil fuel infrastructure, saying the development of hubs should be coupled with meaningful public engagement.

“The reality is … there are communities that’ve been pushing back against our dependence on fossil fuels and the legacy that fossil fuels have had, and we want to be … able to show that we can use fossil fuels responsibly and that we can minimize the environmental impacts,” said Wilcox, appearing virtually last month at an event hosted by the Greater Houston Partnership, a Houston area chamber of commerce.

“We have the technologies to do this,” Wilcox continued.

A spokesperson for the Office of Fossil Energy and Carbon Management (FECM) said the agency is turning to local leaders and advocacy groups to discern what kind of engagement is needed for different projects, communities and technologies.

“It is a priority for DOE to ensure that the energy transition is inclusive and equitable, and we take the community feedback and input gained from conversations and listening sessions into our decision making,” the spokesperson said in an email.

“As we pivot to demonstration and deployment for the critical technologies that FECM focuses on, environmental justice and public engagement will be at the forefront,” the spokesperson added.

Environmental justice advocates, however, have pushed back on the Biden administration’s plans to build “next generation industries," such as carbon capture in distressed communities, including in a May report from the White House Environmental Justice Advisory Council (Energywire, May 17).

Thomas of Public Citizen said carbon capture can be an important technology for limited use where electrification is not an option. But “using it as a mechanism to prolong the life of fossil fuels is not a good use of our energy and resources, whether it’s to create a hydrogen hub, build out [liquefied natural gas] infrastructure or attach to a coal plant,” she added.

Even so, those pursuing CCS hubs say they are planning to solicit community input.

At the same event as Wilcox, a representative from Exxon called it “absolutely essential” to listen to local communities about the company’s so-called CCS Innovation Zone in Houston.

“This is not a very generic thing,” Powell said, adding, “This is something … you have to go in and be very specific on. … What is that community needing or desiring or what issues do they have?”

Todd Spitler, an Exxon spokesperson, said the company has had meetings with Texas Gov. Greg Abbott (R), Houston Mayor Sylvester Turner and the Biden administration, and will “continue to meet with all interested officials.”