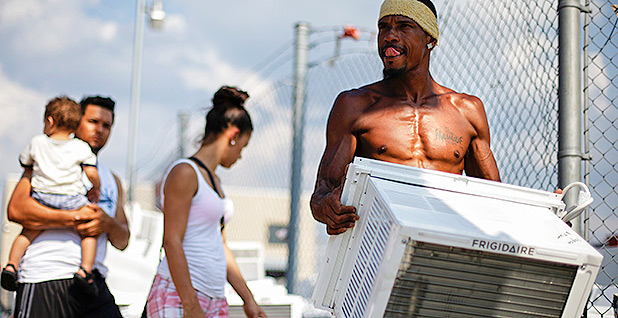 The Centers for Disease Control and Prevention has canceled a summit on climate change and public health. One former CDC director said the agency’s climate change work has reduced mortality rates in Philadelphia, which, as shown in this 2013 photograph, has been coping with unusual heat waves. Photo courtesy of AP Images.

The Centers for Disease Control and Prevention quietly and abruptly canceled a major climate change summit scheduled for next month shortly after Donald Trump was elected president, according to emails sent to those scheduled to speak and obtained by E&E News.

The Climate and Health Summit was scheduled to be held in Atlanta, where the CDC is headquartered, in February. Agency leaders did not directly address why the summit was canceled and instead forwarded an email sent to participants indicating it may be rescheduled.

"We are currently exploring options so that the Summit may take place later in the year," CDC officials wrote.

Former CDC directors say they are not surprised by the climate summit cancellation, charging that the agency has a long history of political retreats. Two officials accused the agency of backing down over fears of reprisals from the Trump administration.

"Sometimes the agency is subject to external political pressure; sometimes the agency self-censors or pre-emptively stays away from certain issues," said Howard Frumkin, former director of the CDC Center for Environmental Health and a professor at environmental health at the University of Washington’s School of Public Health. "Climate change has been that issue historically."

The summit involved months of preparation and had solicited research papers. The theme would have been on the "state of the science on climate and health, adaptation efforts through interagency collaboration, and communication and stakeholder engagement strategies," according to a flier. Partners included the American Public Health Association, Association of State and Territorial Health Officials, Council of State and Territorial Epidemiologists, and National Association of County and City Health Officials. It would have positioned climate change as a central issue for CDC, with a political rival of Trump as a keynote speaker.

Richard Jackson, a director of the CDC’s Center for Environmental Health from 1994 to 2004, said the agency has backed off from other public health issues that were politically toxic, like gun control, reproductive health and HIV research.

He said it is likely senior CDC officials see climate change as "not an immediately winnable battle" and are unwilling to wage the fight aggressively in the Trump era. He said it makes sense for the CDC to choose its political battles wisely. In the past, the CDC has backed off from issues and ceded research to universities and advocacy groups, he said.

"The folks in power say we make policy; we don’t meddle in science. But it’s hard to make policy if the science doesn’t agree with them, so they meddle in the science," he said.

Frumkin had thought of attending the climate summit — but after he saw the election results, he suspected that it would be canceled and didn’t buy a plane ticket. He, too, said that backing away from controversies has long been a practice at the CDC.

He recalled pressure during his time at the CDC during the presidency of George W. Bush. The night before he was to testify at a congressional hearing, he said, an administration official called and told him to omit a section about the public health dangers of climate change. Frumkin said he refused, offering as an alternative not to testify at all and leave his seat vacant.

The CDC’s climate change work has already reduced mortality rates in Philadelphia as the city helps residents cope with increasingly extreme heat waves, Frumkin said. He called reducing that work as "jarring as if the CDC announced it would stop talking about infectious disease or cancer."

The danger is that a preliminary decision to back off climate research could signal that CDC leadership is not ready to take aggressive action on climate issues at a time when they are more important than ever, said Ed Maibach, director of the Center for Climate Change Communication at George Mason University.

He was scheduled to speak at the summit but was sent an email noting its cancellation.

"I’m concerned this is an act of self-sabotage on the part of the CDC," Maibach said. "The larger specter is that it will set the tone for self-silencing from the people at the top."