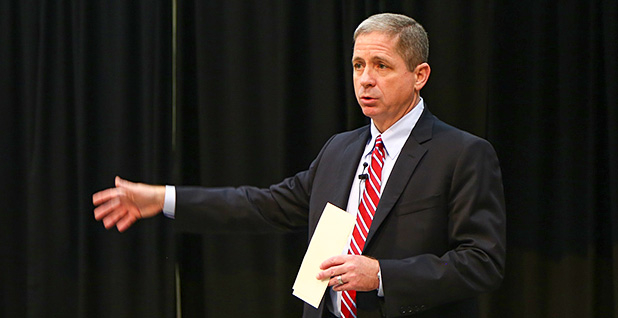 President-elect Joe Biden’s plan for a 100% carbon-free power sector by 2035 could endanger grid reliability and carry an "extremely high" cost that makes such a time frame unlikely, the CEO of Texas-based Vistra Corp. said yesterday.

Curt Morgan, who has led the power producer and retailer since October 2016, called Biden a "smart guy" and a "moderate person." Once experts are able to explain practical realities, he suggested, the incoming administration may aim for electricity without carbon pollution by 2050.

Morgan, 60, called himself an apolitical person who respects Biden. The CEO stressed that a carbon-free U.S. electricity sector could be realized, though he doesn’t support trying to achieve it by 2035.

"The cost of that is extremely high that the American people would have to pay, and I think is prohibitively high," Morgan told E&E News. "The reliability of the grid would suffer substantially."

To be sure, Biden’s plan has many defenders, and climate activists have said the former vice president’s plan is challenging but achievable. Spokespeople for the Biden transition didn’t respond to a request for comment by press time.

But Morgan said that while a grid with wind, solar and batteries can be built, it would require far more infrastructure than is in place in order to run a reliable grid. And that could include substantial backup batteries and extra wind capacity, he said.

The comments from Morgan, who recently said during an interview with the Financial Times that the 2035 plan could imperil Biden’s presidency, came as Vistra has been making its own clean energy shift.

Morgan yesterday stressed a need for a measured and balanced approach, including natural gas at this point.

"We can achieve the climate targets that we would like from a temperature standpoint by still having some level of natural gas … to provide grid stability and reliability for customers," he said.

To reach climate targets, Morgan said, there can’t just be a focus on the U.S. power sector. He said transportation, agriculture, construction and heating will need to be decarbonized.

Just changing the power-sector segment could cost trillions of dollars, he said.

"You’d be far better off trying to balance that out in the other sectors of the economy than to throw everything you have … at trying to completely decarbonize the power industry," the Vistra CEO said. "And it makes no sense. It will not get you the targets that you’re looking for."

But Morgan said the politics are difficult, especially when it comes to cars: "There’s voters attached to that car. And the power plants don’t vote."

He also brought up California, suggesting that companies are looking to leave the state because they can’t run a business with unpredictable, unreliable power. Reliable power, he said, is also needed for electric vehicles, regardless of a possible wildfire or cloud cover or less wind.

"It’s the balance between climate change, economics and the economy that I think is missing a bit in California," Morgan said. "And if we allow climate change to trump other parts of the economy, I think what happens is we create even more problems for society than what climate change actually presents us as a problem."

He said there’s a smart way to work to decarbonize power plants, but he doesn’t think trying to force it by picking a number in 2035 will work.

"I do believe we will significantly decarbonize the power sector by 2035," he said. "I just don’t that we’ll be at zero at that point in time."

Morgan said he’s worried about the political will of elected officials to make hard choices to decarbonize the entire economy. He said a potential economywide carbon fee in the United States would be the best way to decarbonize, plus a dividend back to consumers who may need it. There also could be a carbon import fee, Morgan said.

Vistra is a member of the Climate Leadership Council.

This week, Vistra announced the planned retirement of the 650-megawatt, coal-fueled Coleto Creek plant in Texas no later than 2027. Vistra also said the 244-MW Trinidad plant could retire by late April, and the 83-MW Wharton plant, which is in a forced outage due to equipment failure, could retire soon. Both of those Texas plants are fueled with natural gas. Texas’ main grid operator has a role in reviewing potential unit retirements.

Meranda Cohn, a Vistra spokeswoman, said in an email that the company assesses its power plants using real-time information, as well as analyzing the cost of compliance with current and pending regulations. With Coleto Creek, she cited the cost of meeting the federal coal combustion residuals rule and effluent limitations guidelines.

In the wake of the announced closure of Coleto Creek, there are now two major coal plants in Vistra’s portfolio without retirement plans — Martin Lake and Oak Grove in Texas. Vistra listed Martin Lake’s capacity at about 2,250 MW and Oak Grove at 1,600 MW.

Morgan said the years are likely numbered for Vistra’s remaining coal-fueled power plants. Retirement timing depends on when market dynamics create an environment where they would need to be retired, he said.

By 2050, Morgan said there could be a carbon pollution-free power sector in the United States. Biden has proposed net-zero emissions economywide for the country no later than 2050, which Morgan said could happen.

"I believe that the technology will advance," he said. "I think that would allow for an orderly reinvestment in the power sector and in the automobile sector, housing, all of that."

But Chrissy Mann, a senior campaign representative for Sierra Club’s Beyond Coal campaign, said the retirement of the Coleto Creek plant could help air and water quality and she took issue with the CEO’s questioning of Biden’s clean energy push in the Financial Times. Mann said it was "kind of silly" in terms of telling American industry what can and can’t be done.

"There’s no reason we can’t challenge ourselves as a state and as a country," Mann said, to "clean up our electric grid by 2035."

Morgan pushed back, saying he has a responsibility to balance addressing climate change with economics and grid reliability.