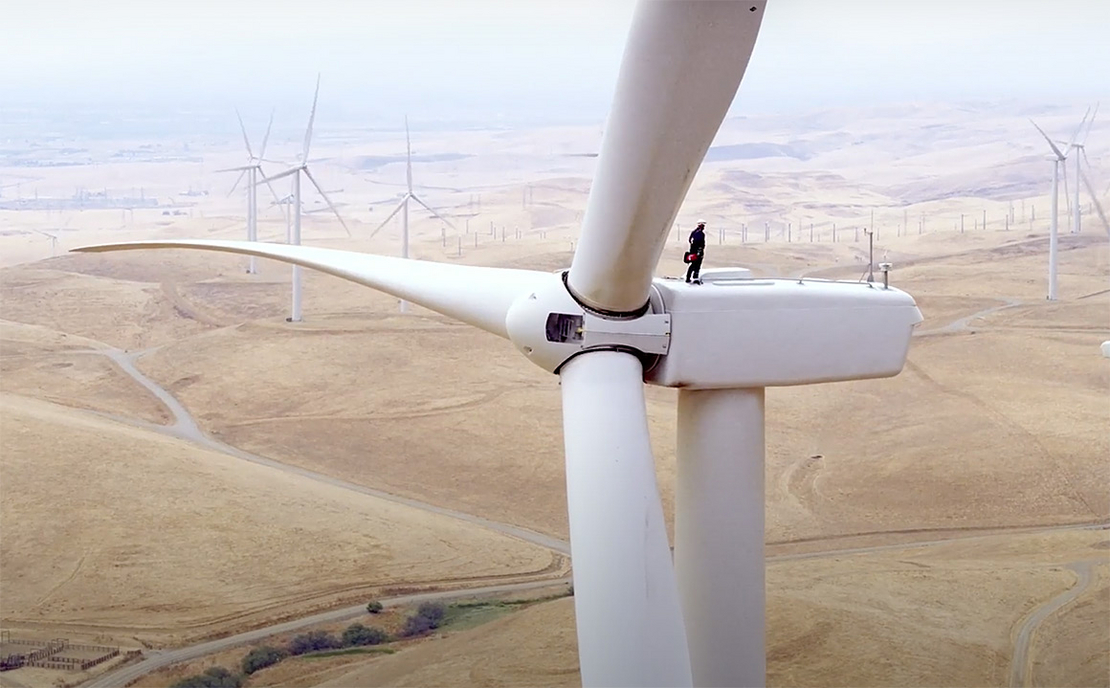 NextEra Energy Inc. has more than 16,600 megawatts of renewable energy projects in development, roughly the same amount it had on the grid in 2017. NextEra Energy/YouTube

The CEO of the world’s largest renewables developer, NextEra Energy Inc., said yesterday that the company doesn’t need the “Build Back Better Act” to meet its goals as it expands the use of technologies such as green hydrogen and carbon capture.

The $1.7 trillion package currently is stalled in Congress amid opposition from Senate Energy and Natural Resources Chair Joe Manchin (D-W.Va.).

Robo also announced he was stepping aside after two decades with the company, 10 of which he has served as CEO.

He and others outlined ambitious growth plans for NextEra based upon widening renewable business opportunities. Those include building transmission lines to support the United States’ expected wind and solar additions.

“Growth in renewables also means there is a growing imperative to add transmission across the U.S. to support this transition to a low-cost, low-carbon economy fueled by renewable energy,” said Robo, adding that the profits of that business unit increased by 20 percent compared with the previous year.

NextEra also wants to expand its customer base beyond its core of investor-owned utilities and municipalities to include companies and industries that have complicated energy needs.

Officials increased the company’s planned profit margins in the coming years based upon those renewable energy opportunities. To be clear, NextEra said it is confident it will be bringing in so much clean energy business that it will be making more money than it previously announced to Wall Street.

Indeed, NextEra Energy Resources LLC already has doubled the number of wind and solar projects in the queue waiting to be built in the last few years. It now has a backlog of 16,600 megawatts of signed wind and solar contracts, which is equal to the amount of actual renewables projects the company had on the grid in 2017.

The figure represents a 20 percent compound annual growth rate in renewables contracts for the company since that year.

“We’ve doubled the backlog [of renewables projects],” said John Ketchum, CEO of NextEra Energy Resources. “We continue to see a lot of promise there, with or without ‘Build Back Better.’ We plan our business as if it doesn’t happen; our financial forecast is based on it not happening.”

That may be, but NextEra was among the signatories this month on a letter to congressional leadership urging the passage of the “Build Back Better Act.” More than 260 companies said the climate and social spending bill would “more than double clean energy investment to $750 billion over the next ten years, supporting one million, good-paying American jobs over the same period of time” (Greenwire, Jan. 24).

The package — which may be broken up into pieces — is considered pivotal by many supporters for President Biden to reach his target of decarbonizing the power sector by 2035. The $555 million climate portion of the original bill contains a wide range of clean energy tax credits, which NextEra has taken advantage of previously.

Robo led NextEra through what is arguably its most pivotal transformation to become the top wind and solar developer in the world.

The moves continue a shuffle of officials moving through the company’s top financial and renewable energy roles. Robo was at the top of NextEra Energy Resources — then known as FPL Energy LLC — before becoming NextEra’s president and chief operating officer and then CEO.

Ketchum was the parent company’s CFO before moving over to the wholesale renewable energy arm. Replacing Kujawa is Kirk Crews, currently the vice president for business management at NextEra Energy Resources.

Analysts probed Robo on the timing of his departure.

“Why now is the right time versus any point in the past or in the future?” asked Jeremy Tonet, an analyst with J.P. Morgan.

Robo said he started discussing a transition plan with NextEra’s board when he became CEO in 2012. He said he made it clear to the board in 2016 that he planned to leave after what is usually a high-profile and high-stakes state regulatory proceeding — Florida Power & Light Co.’s rate adjustment — scheduled for 2020.

FPL is Florida’s largest electric company and the top regulatory asset for NextEra. Officials delayed that planned rate case for a year after NextEra bought Gulf Power Co. from Southern Co., eventually combining it with FPL.

“It’s been my plan for a very long time,” Robo said. “We’ve been very pleased with the team that’s going to lead the company to the future.”

Eric Silagy, president and CEO of FPL, will also be the electric company’s board chairman. Robo currently holds that job.

Silagy and FPL have been in the state’s political headlines. FPL is among the top donors to Florida’s Legislature and other major elected officials whose decisions affect the regulated electric utility, and as such, it has inextricable ties to state politics.

Recent news stories have shown a complicated web that the company and its executives wove with consulting firms, political insiders and lawmakers. For example, the Miami Herald, in partnership with the nonprofit news organization Floodlight, used a variety of documents to show NextEra and FPL’s influence on a rooftop solar bill and its sponsor. FPL later created a website that took aim at the Herald.

Julien Dumoulin-Smith, an analyst with Bank of America, asked Robo to share comments around those headlines.

“I know there has been a lot of back-and-forth, and perhaps there is a lot of context to provide there,” Robo said.

The Orlando Sentinel also has been chronicling for months FPL’s connection to groups that have been behind a scheme to promote spoiler candidates in three battleground state Senate races.

That investigation uncovered a tie between FPL and Energy Fairness, a group that is critical of Florida’s current rooftop solar policy, known as net metering.

The Florida Legislature is considering a bill, which passed its initial Senate committee two weeks ago, that would clamp down on those solar credits (Energywire, Jan. 12).

Yesterday, Robo said the company conducted its own internal investigation of FPL that included a look at financial records, everyone named in company email records, and the personal emails and text messages of those officials named.

Officials “found no evidence” of any issues, illegality or wrongdoing, Robo said.

“I feel very good about the investigation we did; I feel very good that there’s no basis to these allegations,” he said. “That’s probably all that we’re going to say today.”