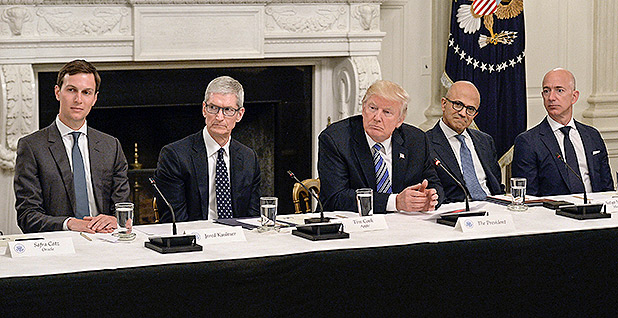 When President Trump made a dramatic declaration to exit the Paris climate agreement three weeks ago, a question loomed: Would the CEOs who advise Trump and are staunch advocates of climate change leave his side?

The answer appears to be no. Even as they lend their names to efforts to fulfill U.S. pledges without Trump, many continue to engage with the president on his business councils, including the leaders of Apple Inc., Amazon.com Inc., Campbell Soup Co., Google, IBM, Intel Corp., Microsoft Corp. and Under Armour Inc.

On Monday, some of the biggest names in technology — Satya Nadella, CEO of Microsoft; Tim Cook, CEO of Apple; and Eric Schmidt, the executive chairman of Google — flanked Trump at a White House meeting on improving government through tech, only weeks after expressing their profound disappointment with Trump’s climate decision.

Right after Trump’s June 1 announcement, it seemed that things might break the other way. Elon Musk, CEO of Tesla Inc. and SpaceX, and Robert Iger, CEO of Walt Disney Co., immediately stepped down from their presidential-adviser roles. A wave of corporate consternation rolled through social media.

But since, the dissenters on Trump’s biggest business councils are following the playbook that seems to be working for congressional Republicans: Condemn the policy while tolerating the man who has something they want.

A prime example is IBM, whose CEO, Ginni Rometty, sits on Trump’s business and technology councils and has visited the White House at least four times this year.

The same day as Trump’s announcement, IBM issued two blog posts that roundly criticized Trump’s choice. One said: "Climate change is an international problem that requires an international solution, and we believe it is important for the world to reduce greenhouse gas emissions. Therefore IBM supported — and still supports — U.S. participation in the Paris Agreement."

But an IBM spokeswoman said in an email that Rometty wasn’t going anywhere when it came to Trump.

"IBM will remain on the council," said the spokeswoman, Rachel Thomas. "At IBM, we believe we can make a constructive contribution through engagement and having a direct dialogue with the Administration."

The CEO of Campbell Soup is staying on the president’s manufacturing council. A spokesman said the company’s support of the Paris Agreement is "clear and unambiguous," but its CEO would work with Trump on other issues.

"Although the Trump Administration decided to exit the Paris Climate Agreement, our President and CEO, Denise Morrison will continue to participate in the President’s Manufacturing Jobs Initiative, as we recognize the importance of growing the U.S. economy and creating manufacturing jobs," said spokesman Thomas Hushen. "We continue to believe that it is important for Campbell to have a voice on the critical issues that will impact our industry, our company and our employees."

One leading climate activist took a dim view of this engagement strategy.

"On climate, you are the company you keep. If these CEOs are serious about climate action, they should follow Elon Musk’s lead and quit Trump’s council," said Jamie Henn, the communications director of 350.org. "They’re fooling themselves if they think they’re really some moderating force or changing his mind."

Still in, with climate and Trump

One signal that Trump’s business advisers remain active on climate issues is their membership in We Are Still In, a website coordinated by former New York Mayor and climate activist Michael Bloomberg where cities, states, universities and businesses sign on to support America’s commitment under the Paris Agreement to reduce carbon emissions.

About 1,200 companies have added their names to the effort that launched soon after Trump’s Rose Garden announcement on Paris. A number of those who have signed are also members of Trump’s business councils, including Apple, Google, IBM, Intel, Adobe Systems Inc., Campbell Soup, Under Armour, Amazon.com and Microsoft.

Trump has established three business-related councils since arriving in office: the President’s Strategic and Policy Forum, which focuses on business and jobs; the Manufacturing Jobs Initiative, intended to recapture momentum in manufacturing; and the American Technology Council, meant to use technology to modernize the government’s operations.

Rometty of IBM sits on both the business and manufacturing councils. The manufacturing council also includes CEOs Kevin Plank of Under Armour, Denise Morrison of Campbell Soup and Brian Krzanich of Intel, who a week before Trump’s decision tweeted, "Intel has been advocating for the Paris Accord, we’ll continue to do so."

Krzanich also sits on the technology council, along with Nadella of Microsoft, Cook of Apple and Schmidt of Google, as well as Adobe’s CEO, Shantanu Narayen, and Amazon founder and CEO Jeff Bezos.

In a few days, Bloomberg is expected to give an update on a second group, called America’s Pledge, which is meant to "aggregate subnational action," in the words of a spokeswoman, Rebecca Carriero. It intends to gather commitments by entities other than the federal government and submit them to the United Nations as a substitute for the federal government, which has stepped away from the goal.

Some of the companies on Trump’s councils may end up being part of that group, too. Many of them have specific climate-related goals, including Campbell Soup, which wants to reduce its environmental footprint, in particular its water use and greenhouse gas emissions, and 50 percent per metric ton of food produced.

Executives who want to push climate action but also want to work with Trump on other issues are forced into a tortured pose, especially in public channels like Twitter.

Soon after Trump yanked the U.S. out of the Paris Agreement, leaders in technology didn’t spare their criticism: "We believe climate change is an urgent issue that demands global action," wrote Microsoft’s Nadella. Google’s Schmidt posted: "Climate change is real. What are we going to do about it?"

Cook, who called Trump on the eve of the decision to ask him to stay in Paris, wrote, "Decision to withdraw from the #ParisAgreement was wrong for our planet." A frequent tweeter, he has since found the time to post a picture of him taking a selfie with former first lady Michelle Obama.

But when they met at the White House this week with the sitting U.S. president, none of the leaders tweeted a thing.