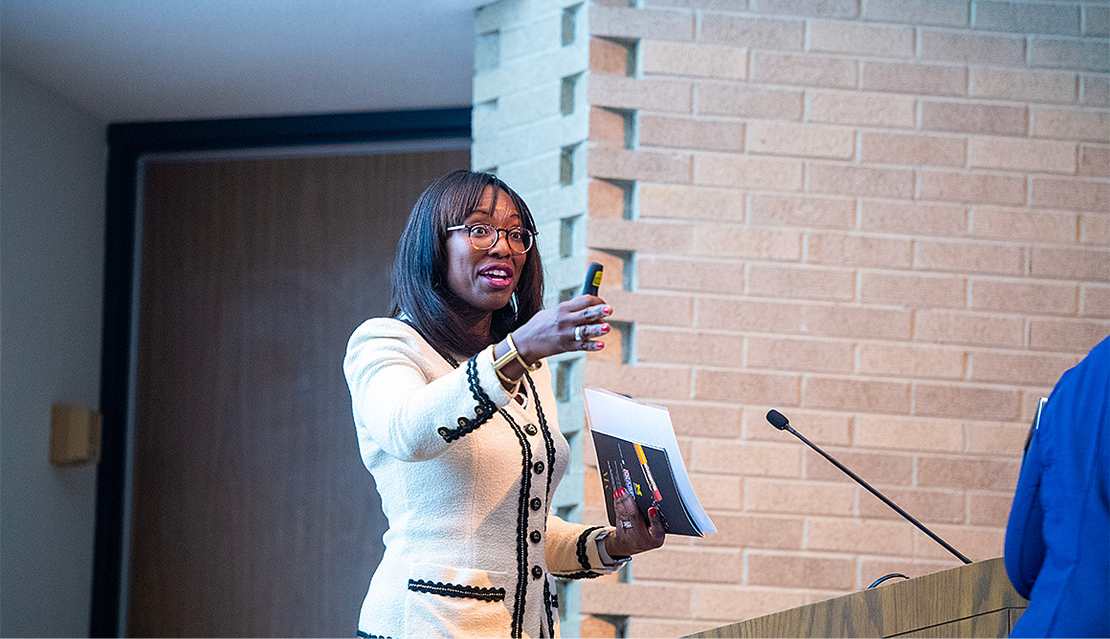 The White House tapped Jalonne White-Newsome to be the Council on Environmental Quality's senior director for environmental justice. University of Michigan

The White House Council on Environmental Quality today announced a new senior director for environmental justice, an appointment observers have been anxiously awaiting.

“Jalonne is a strong and effective champion for communities that have been overburdened by pollution and subjected to decades of environmental injustice,” said CEQ Chair Brenda Mallory. “Jalonne’s ability to listen deeply, bring people together, and find creative solutions will be invaluable as we work to deliver on President Biden’s promise of environmental justice for all.”

Most recently, White-Newsome led Empowering a Green Environment and Economy LLC (EGE2), a consulting firm she first started more than a decade ago to help manufacturers reduce their environmental impacts. The firm has since grown to create policies and partnerships to help low-income regions and communities of color navigate a changing climate.

White-Newsome’s time in academia includes a project on extreme heat at Brown University and teaching environmental and occupational health at George Washington University.

A decade ago, she worked at We Act for Environmental Justice, a New York-based environmental justice organization, and launched the group’s Washington office. She became the organization’s first director of federal policy.

We Act has been among President Joe Biden’s critics on environmental issues. Its executive director, Peggy Shepard, who chairs the White House Environmental Justice Advisory Council, has at times chided the administration for its support for carbon capture, delays in implementing promised reforms and other matters.

Groups like We Act have also questioned CEQ’s decision to leave out specific race indicators from a screening tool that will help the administration direct federal aid to environmental justice communities.

Shepard said about today’s news, “I think it’s an opportunity for a reset.”

“I do know Jalonne quite well,” Shepard said. “She’s really the sort of person who can start something up and take the vision and run with it. I certainly hope she can do that with this position as well.”

Mustafa Santiago Ali, a vice president at the National Wildlife Federation, called White-Newsome a “leading champion in the environmental justice movement” who will “bring an important, renewed focus to the Biden Administration on addressing the enduring public health and environmental challenges facing front-line and fence-line communities.”

The Equitable & Justice National Climate Platform issued a statement calling the position “vital” to advancing key goals. “We congratulate Dr. White-Newsome and look forward to working with her and the rest of the CEQ team to ensure no communities are left behind,” the group said.

In recent months, CEQ had been in a diminished position after the high-profile departures of Cecilia Martinez, who went to the Bezos Earth Fund, and David Kieve, who now leads EDF Action, the fundraising arm of the Environmental Defense Fund.

The pair left early this year at a time when pressure was mounting for the White House to deliver on hefty environmental justice promises. But CEQ has recently emphasized multiple environmental justice hires, including top adviser Amanda Aguirre and Jessica Ennis to direct public engagement (Greenwire, April 28).

Today, CEQ said it was promoting Corey Solow from deputy to director of environmental justice. In addition to Mallory, who will testify on Capitol Hill next week, the council has six people now working on the issue.

“We hope this will mean getting things expedited,” Shepard added. “There are a lot of important parts of this pending, and this has got to all come together.”