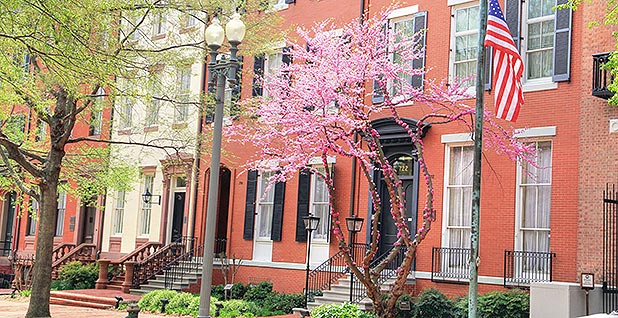 CEQ staff have been instructed to pack up from the townhouse at 722 Jackson Place. Photo by Ingfbruno, courtesy of Wikipedia.

Staffers in the White House’s environmental shop have been directed to move out of the building that has long served as the agency’s headquarters.

Career staff in the Council on Environmental Quality were told to remove their things from 722 Jackson Place, which has been considered CEQ’s public home, according to Christy Goldfuss, who led that agency during the Obama administration.

The townhouse across the street from the White House is one of several that CEQ has occupied, with staff also spread out into other buildings on Jackson Place and in the Eisenhower Executive Office Building.

The staff shuffle was first reported today by The Washington Post.

It’s unclear whether the move has any broader implications for CEQ, but it comes as former Obama administration officials and others fear that CEQ will be marginalized in the new administration (Greenwire, Feb. 9).

The Trump team has yet to announce a nominee to lead that agency, although several top energy aides were recently hired to work in the White House. Former Texas environmental regulator Kathleen Hartnett White has been a rumored contender to become the nominee to chair CEQ.

"It is very traumatic for those of us who see 722 as the place where we greeted the public," said Goldfuss, who recently returned to work at the Center for American Progress.

"The lack of guidance toward CEQ and the interaction with the staff there — given short notice to just pack up with little alternative — is more a question about who’s in charge. … With the absence of leadership, it calls into question who’s running the agency."

About 15 career CEQ staff stayed on in the environmental shop past the Obama administration, according to Goldfuss.

Tiernan Sittenfeld of the League of Conservation Voters today slammed the move. "Old habits die hard for landlord Trump. His latest eviction notice — booting the Council on Environmental Quality from its home for the past 40 years — once again exposes his disdain for protecting public health and the environment," she said.