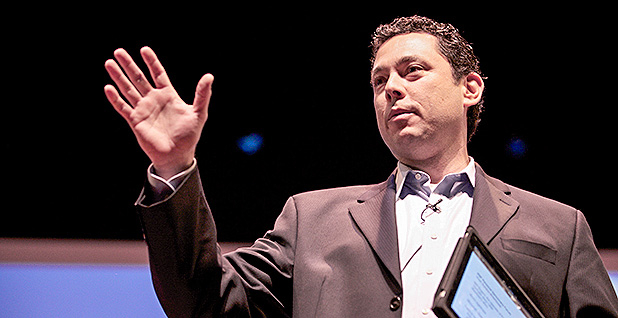 House Oversight and Government Reform Chairman Jason Chaffetz (R-Utah) announced yesterday he will resign from Congress at the end of June — earlier than expected — setting off a scramble for the gavel of the chamber’s chief investigative panel and his House seat.

Chaffetz, 50, a fifth-term lawmaker who oversaw a panel that has investigated EPA culpability in Flint, Mich., and Energy Department loan programs, said in a statement he was ready to "begin a new chapter." He had earlier announced he would not seek re-election for what is certain to remain a Republican seat.

Evan McMullin, the 2016 independent presidential candidate, is the most prominent possible candidate. The former CIA agent has expressed interest in the seat before but would not commit to a bid yesterday.

He won 21.5 percent of the Utah vote in the 2016 White House election and has emerged as a major figure in the Republican opposition to President Trump.

Chaffetz did not say what his future plans were, but other lawmakers say he’s told many in the GOP caucus he will work as a commentator for Fox News. He’s already a frequent presence on cable news shows.

Rep. Trey Gowdy (R-S.C.) is seen as the favorite for the committee post, but it’s not clear if the former federal prosecutor wants a job that would make him the point man on congressional investigations of the Trump White House. He’s said to be considering the spot.

"Rep. Gowdy is talking to members in the conference about the qualities they believe are most important for the next chairman to possess," the lawmaker’s spokeswoman, Amanda Gonzalez, said yesterday.

Gowdy currently sits on the Oversight and Government Reform, Judiciary, Intelligence, and Ethics committees. He is best known for his role as the chairman of the House Select Committee on Benghazi, which the GOP created to investigate the 2012 attack on the U.S. diplomatic compound in the Libyan city.

Not seen as a major player on energy and environmental issues, Gowdy has rarely broken with his party in promoting expanded energy production and regulatory rollbacks. He has a 3 percent lifetime rating from the League of Conservation Voters.

The House Steering Committee, a 35-membership panel largely controlled by House leaders, will meet with the candidates and then vote on its recommendation for the next chairman. Its pick would then have to be ratified by the broader GOP conference, a move seem as a formality.

Jordan, who lost a four-way race for the gavel in 2014, said only "we’re looking" at it when asked by reporters yesterday evening about his plans. A founder of the House Freedom Caucus, the sixth-term lawmaker is not particularly popular with party leaders for his role in the rump group of conservatives who often butt heads with leadership (E&E Daily, May 17).

With 10 Freedom Caucus members on Oversight and Government Reform though, leadership may not be able to dismiss Jordan.

Rep. Mark Meadows (R-N.C.), the chairman of the Freedom Caucus who also sits on the Oversight panel, said yesterday "if the decision is made on merits" it will go to Jordan. He said Jordan has seniority on the committee over Gowdy, who he acknowledged would draw "a lot of support if he runs."

"I know Trey Gowdy well enough and he will not jump Jim Jordan for that chairmanship. I just don’t see it happening," Meadows added.

Ross said yesterday he would only enter the race for the gavel if Gowdy does not make a bid. He said he would focus on passing overdue legislation, including a civil service reform package, if he were to take over the committee.

Russell, a second-term lawmaker, has said he is in the race regardless of whether Gowdy runs. The lawmaker said he would focus on ways to make the government more efficient if he led the panel.

The competition among GOP candidates will be fierce in a primary that in the nation’s most reliably conservative state will in effect determine who comes to Capitol Hill. First elected in 2008, Chaffetz consistently won the 3rd District by more than 40 points.

Aside from McMullin, Damian Kidd, a Republican and attorney, has already entered the race. He has never run for office but worked for Sen. Mike Crapo (R-Idaho) when he served in the House.

Henderson, in particular, is seen as a likely candidate and a formidable one.

"For years I’ve gotten questions about running when Jason steps away. I didn’t expect to have to make this decision so soon," Henderson told the Washington Examiner. "It’s something my family and I are seriously considering."

Chaffetz has not ruled out future attempts at public office, likely a Senate seat or the governorship.

Sen. Orrin Hatch (R-Utah), whose seat Chaffetz was said to be eyeing, posted a statement on Twitter yesterday thanking Chaffetz for his service. Hatch, who was first elected in 1976 and is the senior Senate Republican, has not yet said definitely what his plans are for 2018.

The special election to replace Chaffetz will highlight Utah’s hybrid election system, which includes both conventions and primaries to determine nominees.

Parties hold conventions, dominated by activists, where candidates compete for delegate votes. But candidates can also petition for a primary election by collecting enough signatures to appear on the ballot. If that happens, the convention winner must enter the primary.

Chaffetz’s departure has sparked a battle between state GOP lawmakers who control both legislative chambers and Republican Gov. Gary Herbert.

Both state House and Senate GOP caucuses voted unanimously this week to start a special legislative session to pass a bill creating a special election under the convention process, the Deseret News in Salt Lake City reported this week.

Lawmakers want to pass legislation that would have party delegates select nominees, while Herbert prefers the standard system, which would allow candidates to gather signatures.

A May 15-16 poll by UtahPolicy.com found that 76 percent of Utahans prefer primary elections to fill Chaffetz’s seat, the governor’s suggested method. The poll surveyed 603 Utah voters and had a 4-point margin of error.

Bishop said he hoped that the state would expedite the process to replace Chaffetz and not "drag it out."