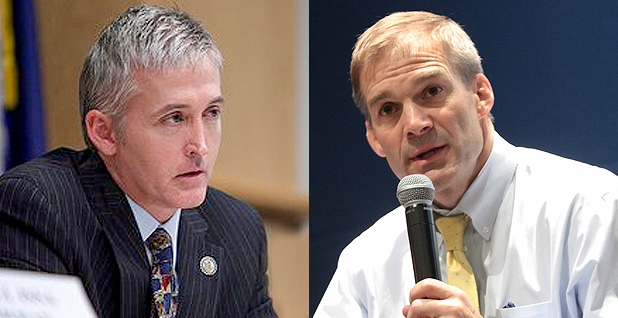 (From left) Reps. Trey Gowdy (R-S.C.) and Jim Jordan (R-Ohio) are contenders for the House Oversight and Government Reform Committee gavel. Photos by Gowdy and Gage Skidmore, courtesy of Flickr.

South Carolina Republican Rep. Trey Gowdy is the front-runner to become the next chairman of the House Oversight and Government Reform Committee, a panel with a broad portfolio that in recent years has investigated the Flint, Mich., water crisis and the Energy Department loan programs.

Amanda Gonzalez, a spokesman for Gowdy, said this week it was "too premature" to say whether the lawmaker would launch a run while Rep. Jason Chaffetz (R-Utah) still holds the gavel.

Also, several media reports also have Gowdy as a candidate to be the next FBI director following President Trump firing James Comey this week.

Still, lawmakers began jockeying for the gavel after Chaffetz announced last month he would retire at the end of this Congress or perhaps sooner.

Among those also eyeing the post are Republican Reps. Jim Jordan and Mike Turner of Ohio, Steve Russell of Oklahoma, and Dennis Ross of Florida, lawmakers and aides said.

Issa, who has taken a more moderate tone since almost losing re-election last year, could press for a waiver from term limits to regain the gavel. But sources say it’s more likely he serves as interim chairman.

Like most chairmanship races, candidates can emerge and fade quickly as different camps make deals or leaders express their preference.

Once Chaffetz leaves, hopefuls will focus on influencing the 35-member House Republican Steering Committee, which includes chamber leaders and members from different parts of the country. They will make a recommendation to the full caucus after meeting with candidates behind closed doors.

House Republicans have in recent years not strictly followed seniority in selecting most committee chairmen. And the Steering Committee recommendation will almost certainly carry.

Rep. John Shimkus (R-Ill.), a senior member of the Energy and Commerce Committee who also sits on the Steering Committee, said both Russell and Turner had discussed the opening with him, but not Gowdy.

"Trey’s got a lot of fans here. There’s some question of whether he’s interested," said Shimkus.

Rep. Tom Cole (R-Okla.), a veteran lawmaker with ties to leaders, said Gowdy would be the "odds-on favorite" for the job if he opts to run.

Cole said Gowdy has won high marks within the conference for his role as the chairman of the House Select Committee on Benghazi, which the GOP created to investigate the 2012 attack on the U.S. diplomatic compound in the Libyan city.

But aides and lawmakers suggest Gowdy might not be too keen on taking the job with his party in control of the White House. Some observers say Chaffetz is retiring in part because he does not want to spend the next several years fending off Democrats’ calls to investigate the Trump administration.

Beyond Oversight and Government Reform, Gowdy also sits on the Ethics and Judiciary committees, but has not been a major player in shaping energy and environmental policy during his four terms.

He, however, is known as a fierce questioner at hearings, including in 2015 when he hammered U.S. EPA officials for their handling of sexual harassment allegations at the agency.

Gowdy has passed up past chances for senior posts, including a 2015 bid for majority leader. He also might have his eye on a federal judgeship. The Charleston, S.C., Post and Courier reported earlier this year that Trump was considering him for attorney general.

While Gowdy might have the support of the House GOP establishment, Jordan, a senior member of the committee, is popular with the chamber’s most conservative members.

The former national champion college wrestler is a founder and remains a lead agitator in the House Freedom Caucus, a powerful group of about 30 of the House’s hard-right members who have repeatedly clashed with chamber leaders.

"All that’s down the road," said Jordan when asked recently whether he would seek the gavel, which he fell short of winning in a four-way race in 2014 that included Chaffetz, Turner and former Rep. John Mica (R-Fla.).

Jordan was quick to say he enjoys the prosecutorial approach that comes with running Oversight hearings, which included his relentless questioning of the Energy Department over failed loans to renewable energy company Solyndra.

"I always enjoy that challenge of someone who is on the witness stand who isn’t being square with us and getting to question them," the sixth-term lawmaker added. "It’s kind of a natural fit for conservatives."

Indeed, the Oversight panel has been a popular landing spot for members of the Freedom Caucus, with nine members currently serving on the panel and four heading subcommittees.

"Jim Jordan is certainly someone that I would pick," said Rep. Mark Meadows (R-N.C.), the Freedom Caucus chairman who also serves on Oversight.

Still, Jordan is not seen as particularly popular with GOP leaders and their backers, who populate the Steering Committee, for taking stances at odds with the broader party. Only one member of the Freedom Caucus, Rep. David Schweikert (R-Ariz.), sits on the Steering panel.

Rep. Mark Walker (R-N.C.), the chairman of the more mainstream Republican Study Committee that counts more than 150 conservative members, said Gowdy would be a "great choice," noting his broad appeal.

He added, "I think Trey is someone the Freedom Caucus would be OK with."

The rest of the field

Other candidates are seen as longer shots.

Russell, a second-term member who sits on the Steering Committee, said he met last week with Speaker Paul Ryan (R-Wis.) and Gowdy about the chairmanship.

He conceded Gowdy would be the "clear favorite," but said both lawmakers encouraged him to run for the post to promote his vision for rooting out government waste.

"It’s important that the Oversight and Government Reform Committee get to some of its reform priorities," said Russell, whose argument might be popular with Republicans eager to avoid investigating the Trump White House.

Turner, a former Dayton mayor and eighth-term lawmaker, narrowly lost in 2014 to Chaffetz but has since left the committee and has mostly focused on the Armed Services and Intelligence committees. He also could be hurt by his vote against the House’s recent plan to repeal the Affordable Care Act.

Ross, a third-term lawmaker who has previously considered leadership runs, is seen as a long shot who is better known for his work on the Financial Services Committee.

Former Rep. Tom Davis (R-Va.), who led the committee a decade ago, said the job will be a lot easier for the next chairman with a Republican administration.

"You tend to over-investigate when your party is not in the White House," he added.

Davis said he would recommend whoever is selected focus on revamping government. "If they really want to drain the swamp, they ought to look at changing the way government operates — that’s where the real money is," he added.