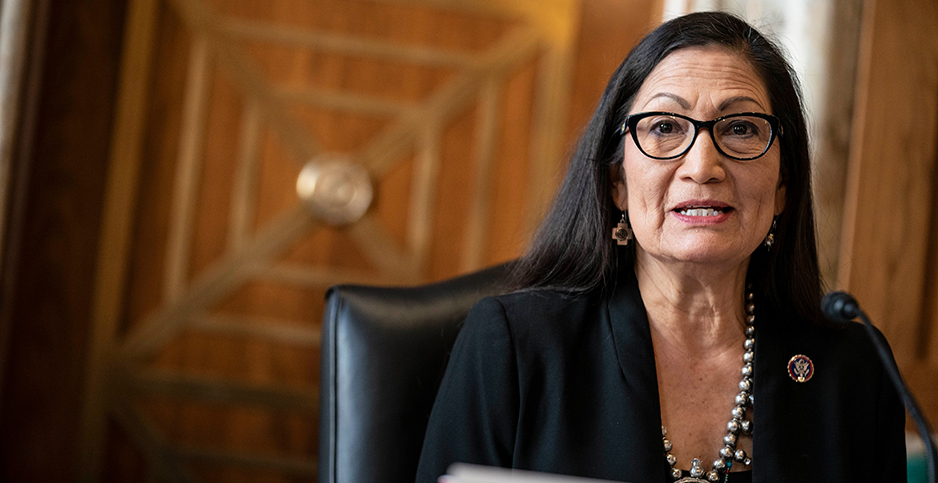 Deb Haaland is poised to be confirmed as President Biden's Interior secretary this evening. Sarah Silbiger/Pool via CNP/SplashNews/Newscom

A distinctive celebration followed by endless personnel, policy and political challenges are in store for Deb Haaland after her expected Senate confirmation today as Interior secretary.

With the commitments in hand to ensure victory in the vote scheduled for 5:30 p.m., Haaland and her Biden administration teammates have been looking toward her swearing-in ceremony, as well as her initial steps as the first Native American secretary in the Cabinet.

Those steps will be on a high wire, balancing the avowedly progressive views she advanced in her first House term with the potentially more centrist preferences of the broader Biden administration.

"I want to first assure you that if I’m confirmed as secretary, that is a far different role than it is for a congresswoman representing one small district in my state," Haaland told Sen. James Lankford (R-Okla.) during her two-day confirmation hearing. "So I understand that role is to serve all Americans, not just my one district in New Mexico."

Repeatedly, Haaland stressed that, if confirmed, "it is President Biden’s agenda, not my own agenda, that I would pursue."

Some elements of that agenda have already been set in motion, with Haaland set to become lead advocate once in office.

Even before her confirmation, for instance, the Interior Department rescinded a controversial Trump administration legal opinion that concluded the Migratory Bird Treaty Act covered only intentional killing or injuring of birds.

Interior said it will issue a proposed rule to revoke a corresponding Trump administration rule, based on the now-rescinded solicitor’s opinion that limited bird protections. This will now put Haaland right in the middle of a high-stakes wrangle that has defied easy solution.

"The Department will also reconsider its interpretation of the MBTA to develop common sense standards that can protect migratory birds and provide certainty to industry," Interior said.

While she will face widespread Republican opposition as secretary, Haaland will also confront the expectations of a handful of GOP supporters, perhaps especially Sen. Lisa Murkowski of Alaska. An early secretarial trip to Alaska would not be surprising.

While Murkowski pledged to vote for Haaland — she was one of four Republicans to support her in a cloture vote last week — the senator said the decision was one she struggled with.

"I am going to place my trust in Rep. Haaland and her team, despite some very real misgivings," Murkowski said, advising the nominee that "I am … going to hold you to your commitments to ensure that Alaska is allowed to prosper."

Pointedly, Murkowski added that "I also fully anticipate that she will have a strong management team in place with people who understand the value of resource development from public lands. She needs this — we need this — within the Department of Interior."

The 60-year-old New Mexico Democrat will be greeted at Interior by some of her former congressional staffers, who now hold key positions at the department. These include chief of staff Jennifer Van der Heide, who has already been getting the lay of the land (E&E News PM, Jan. 20).

Haaland’s confirmation will also clear the way for the Senate to start considering other political appointees, including Elizabeth Klein, nominated to serve as deputy secretary. Deputy secretaries customarily manage the department’s day-to-day operations, but Klein and Haaland will have to work out their particular division of labor.

Still other key positions that must secure Senate confirmation, including the heads of the National Park Service and the Bureau of Land Management, have yet to be named. While secretaries obviously have a say about bureau nominees, the White House ultimately rules.

Haaland’s prior management experience notably included chairing the tribal Laguna Development Corp.’s board of directors. It operates several casinos and other businesses, none of them approaching Interior’s roughly $12.8 billion annual budget and 60,000-plus employees.

Her immediate predecessor, David Bernhardt, knew the department well from prior service as deputy secretary and eight years with the George W. Bush administration. Haaland lacks that advantage even as she inherits some persistent administrative headaches.

"Management of federal oil and gas resources is one of the highest risks facing the government," the Government Accountability Office warned last year in an assessment of Interior programs (Greenwire, Feb. 22).

Put another way, Haaland will confront a big pile of homework, a point hammered home by her GOP critics.

"During her confirmation hearing, Congresswoman Haaland struggled or refused to answer the basic questions any nominee for the Department of the Interior would be expected to know," declared Sen. John Barrasso (R-Wyo.). "She was unwilling or unable to respond to questions about the department, resource policy and the laws she would be asked to implement."

"Under President Trump, the Department of Interior became one of the most scandal-ridden agencies in the federal government," said Senate Majority Leader Chuck Schumer (D-N.Y.). "Rep. Haaland will move the Department in a dramatically different direction."