Chamber edges toward another nuclear standoff 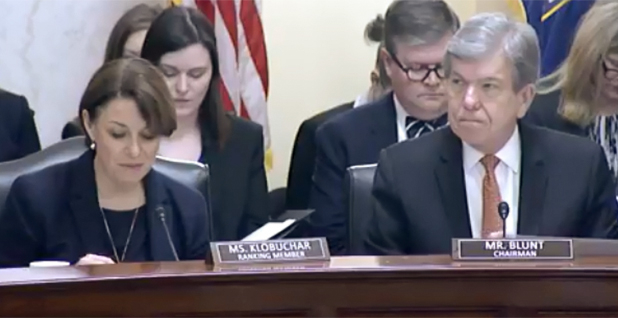 Senate Republicans yesterday advanced along party lines a change to the chamber’s rules that would allow them to greatly expedite the majority of President Trump’s judicial and executive branch nominees.

While Republicans are appealing to Democrats for help in permanently changing the rules on a bipartisan basis, GOP senators are also considering doing so via the "nuclear option," which allows the majority to change the rules by a simple majority vote.

Following a lengthy morning debate, the Rules Committee voted 10-9 to approve the rules change, S. Res. 50, which would reduce post-cloture debate time for district court nominees and most executive branch positions from 30 hours to two.

It would retain the current 30-hour post-cloture time for Cabinet officials and Supreme Court and appellate nominees, as well as for agencies where the two parties alternate picks for governing boards (E&E Daily, Feb. 7).

Rules Chairman Roy Blunt (R-Mo.) called it a "straightforward" proposal modeled after a temporary rules change agreed to by 78 senators in the 113th Congress that similarly reduced the amount of time that nominees could be debated after the chamber votes to invoke cloture — or end debate.

Noting that 35 of the senators who previously supported that change on a temporary basis are still serving, Blunt argued that the new resolution "still allows for significant opportunities for senators to debate the nominee’s merits."

He said the resolution, which he crafted with Sen. James Lankford (R-Okla.), also contains "the kinds of protections we would want if we were in the minority."

"Presidents deserve to have their teams in place," Blunt said. "It’s that simple. And it applies to whatever party occupies the White House."

He noted that Sen. Amy Klobuchar (D-Minn.), the ranking member on Rules, declared her candidacy for the presidency on Sunday.

"If Sen. Klobuchar becomes president, she should have her nominees not go through the process that the current president’s nominees have been put through," Blunt said, adding that Trump "shouldn’t have to deal with it either."

He added: "Frankly both sides will continue to up the ante on this issue until we stop ourselves. I think this is a good time to do that."

But Democrats are wary of the timing of the proposal, which they say will turn the Senate into a rubber stamp for Trump’s nominees.

"This is a big deal, it’s not just a minor proposal that has suddenly come our way," said Klobuchar, noting widespread public concern about the Trump administration.

"It’s our constitutional duty to fully vet the most senior people in our government," including judicial nominees named to lifetime positions, she added.

She noted that she has had conversations with Lankford "about trying to work on something going forward that could be bipartisan, a different date, a different proposal."

Klobuchar also drew a distinction between the current proposal and what senators agreed to temporarily in 2013. At the time, she noted there was a 60-vote threshold to end debate on nominations.

Former Senate Majority Leader Harry Reid (D-Nev.) later used the nuclear option to lower that threshold to a simple majority, although he retained the past standard for Supreme Court nominations.

Current Majority Leader Mitch McConnell (R-Ky.) returned the favor in 2017 by again going nuclear to lower the cloture threshold for Supreme Court nominees to a simple majority, as well.

Klobuchar also noted that in 2013 the "blue slip" tradition was respected, referring to a long-standing Senate tradition that allows senators to play a role in selecting judges for their home states. Democrats have accused the GOP majority of ignoring the practice.

Sen. Tom Udall (D-N.M.), who has long been interested in updating the Senate’s arcane rules, said the best time to do so was on a bipartisan basis at the outset of a new Congress.

"If you change the rules in the middle of a Congress, you get ill will, you get bitterness, you get hard feelings, and it hurts our ability to work with each other," he said.

He submitted for the record a document that showed as of Monday there were still 143 Senate-confirmed executive branch positions without a nominee out of a total of 706 slots.

"So I don’t think the problem is here," Udall said.

GOP leaders, including Sen. John Barrasso (R-Wyo.), have said they’ll go nuclear to change the rules if a bipartisan agreement isn’t reached, but Republicans have repeatedly sidestepped questions over whether there is enough support within their caucus for the move.

Blunt said yesterday he didn’t know if there is enough GOP support for the nuclear option.

"We’re still trying to find 60," he told E&E News, referencing the number of votes needed to make the change under the Senate’s regular order.

Sen. Lamar Alexander (R-Tenn.) said he’s asked Democrats to work with him on a similar deal to the one he helped broker with current Senate Minority Leader Chuck Schumer (D-N.Y.) in 2013, which he noted came with a Democrat in the White House and Reid as majority leader.

"My invitation is over the next couple of weeks, if they can think of a way to improve the Blunt-Lankford proposal, I’m willing to work with them," Alexander told E&E News. "My hope is that we could do that and get 60 votes."

So far, Alexander added, "there’s been silence" from Democrats on the offer. He declined to comment on whether he would support the nuclear option if bipartisan support fails to materialize.