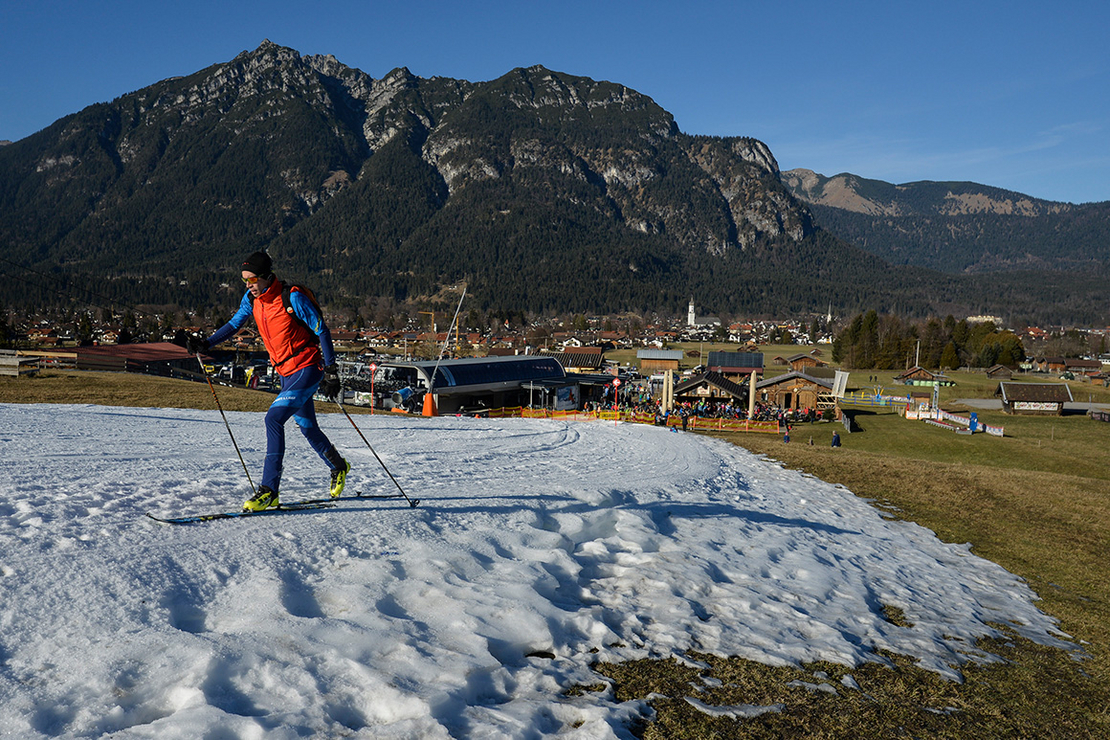 A ski mountaineer ascends a slope of artificial snow in the German Alps. Researchers say European mountains are getting greener because of climate change. Philipp Guelland/Getty Images

The snow-capped European Alps are gradually turning from white to green as the region warms, new research finds. It’s a transformation so clear that it’s visible from space.

The study, published yesterday in Science, used satellite data to map out snow and vegetation cover across the iconic mountain range, which stretches from eastern France all the way into Austria. It finds that plants are springing up at high elevations, places they previously wouldn’t have thrived.

About 77 percent of the Alps, above the tree line, have experienced a “greening” over the last 40 years.

“The scale of the change has turned out to be absolutely massive in the Alps,” lead study author Sabine Rumpf, an assistant professor at the University of Basel, said in a statement.

It’s a phenomenon already well-documented in other cold parts of the planet. Large swaths of the Arctic have also greened over the last few decades, satellite studies have found. The same is true for parts of High Mountain Asia as well.

More vegetation may sound like a good thing — and it may be, temporarily, for the plants. But the greening process also has negative consequences, which can outweigh the benefits.

When plants spring up in places they didn’t previously exist, they darken the surface of the planet. That causes the area to absorb more heat. As a result, snow melts faster.

Vanishing snow can speed up local warming. Because of its bright, reflective surface, snow helps beam sunlight away from the earth. When it disappears, the landscape warms at an even faster rate.

Less snow can also be a bad thing for some cold-climate plants. Snow helps insulate the ground in the winter like a fluffy blanket, keeping plants warm and snug until the spring. Later in the year, when it begins to melt, it’s a vital source of fresh water.

That could become a problem for the Alps. The new study also finds that snow cover is shrinking in the mountains.

For now, declines are only visible across less than 10 percent of the Alps, according to the satellite images. It may not sound like much, but the researchers warn that it could be the start of a concerning trend.

And even in places where snow cover is still present on the ground, the total volume of snow may still be shrinking. On-the-ground data collected at weather stations throughout the European Alps have found that average snow depth is decreasing over time.

The satellite images simply show the areas where snow has declined so much that it’s no longer visible on the ground.

As the region continues to warm, the researchers warn, these patterns are likely to continue.