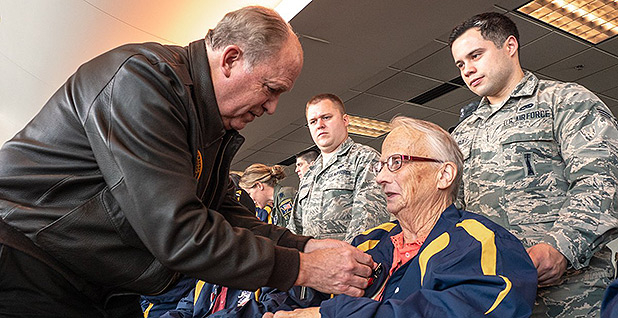 Alaska Gov. Bill Walker (I) greets war veterans returning from a trip to Washington, D.C. He dropped out of his re-election bid last week, throwing a curveball at the race to replace him. @AkGovBillWalker/Twitter

ANCHORAGE, Alaska — The race for governor is going through a chaotic transition from a three-person to a two-person contest this week as Alaska Gov. Bill Walker’s team tears down his campaign signs and supporters of former U.S. Sen. Mark Begich, the Democratic candidate for governor, seek to lure Walker supporters into his camp.

The shift began Friday when Walker (I) suspended his campaign for re-election in hopes of giving Begich a better chance of beating front-runner Republican Mike Dunleavy, a former state senator.

Dunleavy has been highly critical of Walker’s handling of the Alaska economy and his use of the state’s popular Permanent Fund Dividend program to offset the state budget deficit. Dunleavy also opposes the governor’s plan to have the state build a massive natural gas export project.

But although Walker is backing Begich, he is not currently scheduled to campaign on the Democrat’s behalf. In fact, yesterday his campaign staff said that the governor is going out of town for a week.

Walker dropped out of the governor’s race only days after former Lt. Gov. Byron Mallott (D) resigned and left the campaign for making what the governor’s office described as an "inappropriate overture" to a woman (Energywire, Oct. 22).

The changing lineup of the Alaska gubernatorial race immediately raised questions of whether voters who’d sent in absentee ballots before Walker’s announcement could cancel those ballots and vote again.

On Monday, the Alaska Division of Elections explained that voters will not get a second chance at voting. "The candidate withdrawal deadline for the 2018 general election ballot was Tuesday, September 4, 2018," state regulators said in an online statement. "No candidate for governor or lieutenant governor withdrew by the deadline and all candidate names are on the final ballot."

As of the end of Friday, the elections division had sent out 24,727 absentee and online delivery ballots and received 4,887 ballots back from Alaska voters.

The elections regulators noted that a "vote for any candidate for governor or lieutenant governor appearing on the 2018 general election ballot will be counted as a vote for that candidate."

That means the Walker-Mallott ticket is still likely to earn votes, despite the candidates’ request to drop out of the race. Early voting began at polling places across Alaska on Monday.

With Walker suspending his campaign, some of the governor’s largest supporters scrambled to shift gears.

The Alaska AFL-CIO, which backed the governor in August, held a press conference Monday at which union President Vince Beltrami declared that "Mark Begich is the right candidate for Alaska’s working families. His decadeslong record of standing up on issues important to workers is clear and strong."

NEA-Alaska President Tim Parker issued a statement saying, "There has never been a starker contrast between two candidates and their vision for public education than exists between Mark Begich and Mike Dunleavy."

Jay Parmley, executive director of the Alaska Democratic Party, said his office has been besieged by Walker supporters offering to help the Begich campaign.

At the same time, the Democrats are focused on reaching out to the people who were with Walker, Parmley said. "Not everybody reads the paper. Not everybody sees stuff online. We’re saying, ‘Listen, the governor’s out of this race. He’s asked people to go with Mark.’ So we’ll spend a lot of time educating people.

"And we’re certainly asking the Walker campaign to help us identify people across the state, leaders in communities that were with him," he said.

Walker cannot, however, share the money he raised for his re-election campaign with Begich.

"Alaska law doesn’t allow a candidate to spend their money in support of another candidate," Parmley noted. "And the Walker campaign can’t give the Begich campaign money."

According to campaign disclosure reports filed early this month, the Walker-Mallott campaign had $155,000 in the bank.

Despite Walker’s efforts to end his campaign, as of midday Monday at least one Walker-Mallott promotion continued to run on a radio station in the small Alaska town of Soldotna, 51 miles south of Anchorage on the Kenai Peninsula.

Tuckerman Babcock, chairman of the Alaska Republican Party, said he heard the advertisement while in a taxi from the local airport on his way to a doctor’s appointment in his hometown.

Once at the doctor’s office, he recounted, "the nurse said, ‘Is Walker running or is he not running? Is he still on the ballot?’ The taxi driver on the way back said he’s a Walker supporter and he’s never voted for a Democrat ever and he doesn’t intend to this time."

"It’s very confusing to people," Babcock continued. "There’s just two weeks left. People who believe in Walker aren’t necessarily not going to vote for him. And it’s quite evident that you can’t just say, ‘I’m out. I want all my voters to go to him.’"

Babcock said he’s seen a spike in Republicans’ interest in the governor’s race, which he attributed to the current head-to-head battle between the conservative Dunleavy and liberal Begich.

He noted that part of the opposition is rooted in Begich’s 2008 victory over Alaska’s popular Sen. Ted Stevens (R). Stevens was convicted of violating federal ethics laws a week before Election Day 2008. In the aftermath, Begich won Stevens’ Alaska Senate seat by fewer than 4,000 votes. Stevens was later exonerated of all charges.

"Mark Begich wasn’t responsible for the Department of Justice’s malfeasance in the case," Babcock said. "But he took advantage of it."

For that and other reasons, he said, "if there is certainly a person to unite the Republican base, it’s Mark Begich."