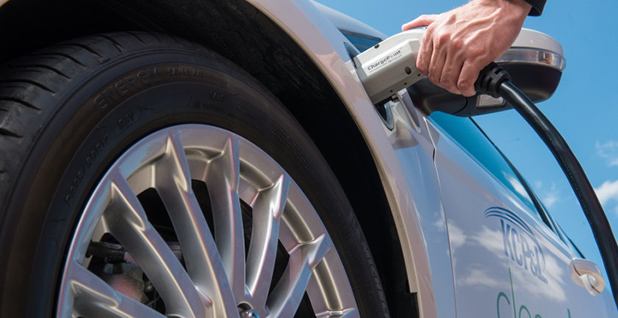 It was three years ago that Kansas City Power & Light Co. made the bold decision to jump-start electric vehicle adoption across its service area by installing more than 1,000 charging stations.

It was a bold idea because at the time there were only about 800 electric vehicles registered in the Kansas City metropolitan area, which straddles the Kansas-Missouri state line. And the utility was gambling that regulators would allow recovery of more than $20 million.

CEO Terry Bassham’s strategy worked. KCP&L built its Clean Charge Network, and the EVs have started to show up in larger numbers.

While bigger cities, especially on the coasts, are seeing many more plug-ins on the roads, Kansas City outpaced those cities in percentage growth from mid-2016 through the third quarter of last year, according to data provided by the utility. Today, KCP&L said, there are almost 2,500 EVs registered in the Kansas City area making use of its 1,200 or so charging stations.

But another part of KCP&L’s plan hasn’t panned out as well. State regulators in Missouri and Kansas turned down the utility’s request to pass along the costs of the charging network, developed with partner ChargePoint (Climatewire, Sept. 19, 2016).

Now KCP&L is back before the Missouri Public Service Commission asking for approval as part of a general rate case to recoup costs and earn a return on Missouri’s part of its charging network. The company also continues to challenge the commission’s prior order in court.

While there’s no disagreement that electrification of the transportation system can help utilities better use the grid to the benefit of all consumers, policymakers in Missouri and elsewhere have tied themselves in knots trying to figure out the appropriate role for monopoly utilities.

Chuck Caisley, a KCP&L vice president, said the vision for the Clean Charge Network wasn’t to crowd out smaller competitors; it was to benefit customers and shareholders by more efficiently using the grid and reducing air emissions.

"KCP&L has never wanted to monopolize electric vehicle charging," he said. "We did want to jump-start it and make sure underserved areas have access to this."

The PSC last spring turned down KCP&L’s request to recover about $6 million to cover the costs related to the charging stations on the Missouri side of its service area.

The commission had come to the same conclusion weeks earlier regarding an application from Ameren Missouri, which had sought permission to pass on costs of five EV charging "islands" along Interstate 70.

The PSC concluded in both cases that the commission lacked authority because electric charging stations aren’t an "electric plant" under Missouri law.

The commission said EV charging stations are analogous to a clothes dryer in a laundromat or a phone-charging kiosk in an airport. "The charging service is the product being sold, not the electricity used to power the charging system," the order concluded.

While the PSC vote to turn down KCP&L — part of a much broader rate case — was unanimous, one Missouri regulator disagreed with his peers in the Ameren decision a month earlier.

In a written dissent, Commissioner Scott Rupp, a Republican former state senator, said electric vehicle charging stations should be regulated when owned and operated by a regulated utility and doing otherwise would stifle development of an EV market, especially in rural areas.

Last fall, Rupp dissented again on social media, tweeting a link to a Forbes article that noted how state regulators in Missouri had turned down utility requests to use ratepayer money for charging stations.

"Great @Forbes article highlighting how @MissouriPSC got this issue wrong," he wrote.

Chris Nelder, a manager with the Rocky Mountain Institute’s electricity practice, co-authored a report last fall that looked at best practices for how and where to build EV infrastructure and barriers to deployment. Among other things, the report considered the appropriate role of utilities.

Nelder is agnostic about whether utilities own and operate charging stations and said there are pros and cons to including costs in a utility’s rate base.

Utilities have access to cheap capital and the ability to quickly build out systemwide networks as KCP&L did. Making EV charging solely a competitive service could ultimately mean a lower cost and more innovation, albeit leading to slower network buildout.

In short, regulators and policymakers can utilize tools such as performance-based incentives, rate design and pilot programs to help scale up investment in charging infrastructure without exposing ratepayers to unnecessary risks.

"It’s important to think about how the profit motivation can steer you in different directions," he said.

And utilities can play a pivotal role to ensure that underserved markets in their service areas aren’t left behind.

"To the extent the private sector is reluctant to invest, then I think you have to let the utilities have a crack at it," Nelder said.

A template in Ohio

East of Kansas City, in Columbus, Ohio, American Electric Power Co. Inc. is waiting on state regulators to act on a different program to authorize $10 million in rebates for deployment of EV charging stations across AEP Ohio’s service area.

The agreement, negotiated with the Electric Vehicle Charging Association (EVCA) and other parties, calls for development of 300 Level 2 charging stations and 75 direct-current fast chargers.

The agreement prescribes how much rebate funding will go to Level 2 charging stations at public, workplace and multi-unit housing. It also stipulates that 10 percent of rebates for Level 2 and DC fast charge stations be set aside for locations within low-income areas.

David Schatz, director of public policy for California-based ChargePoint, said that if the program is approved, it would roughly double the number of charging ports available in Ohio. ChargePoint is a member of the EVCA but not a party in the case.

The rebate program as proposed "leverages the competitive market that already exists" for EV charging in Ohio and ensures that no segment of the market is excluded, Schatz said. He sees it as a template for other states to follow, including others in the Midwest.

The rebates themselves would go to site hosts. "This is to incent site hosts and lower their barriers to adoption," he said.

AEP wouldn’t own or earn a return on the charging stations, but it would be eligible to collect a 5 percent administration fee.

KCP&L, meanwhile, will again make the case that its investment in EV charging will produce net benefits for its customers in the long run.

Unlike a couple of years ago, the utility has actual data from 1,200 charging stations at 350 locations to help back up those arguments.

"Now we have a ton of practical qualitative and quantitative data," he said, "instead of just talking empirically about what’s happening in California and applying it here."

Included in testimony provided to the PSC are charts that show demand from EV charging during the last two weeks of July 2017, right around the time when demand on the KCP&L system is at its peak. In general, the charts showed EV charging load doesn’t coincide with the utility’s system peak.

Despite three times as many EVs on the road today as there were three years ago, when KCP&L announced the Clean Charge Network, penetration is still small. So are the benefits of drivers plugging in cars during off-peak hours.

But Caisley said it’s only a matter of time before there are thousands more EVs on the roads in the utility’s service area, which could put to work significant parts of the grid that sit idle most of the time.

"Eighty percent of the time, the system is 50 percent underutilized," he said. "That’s massive waste."