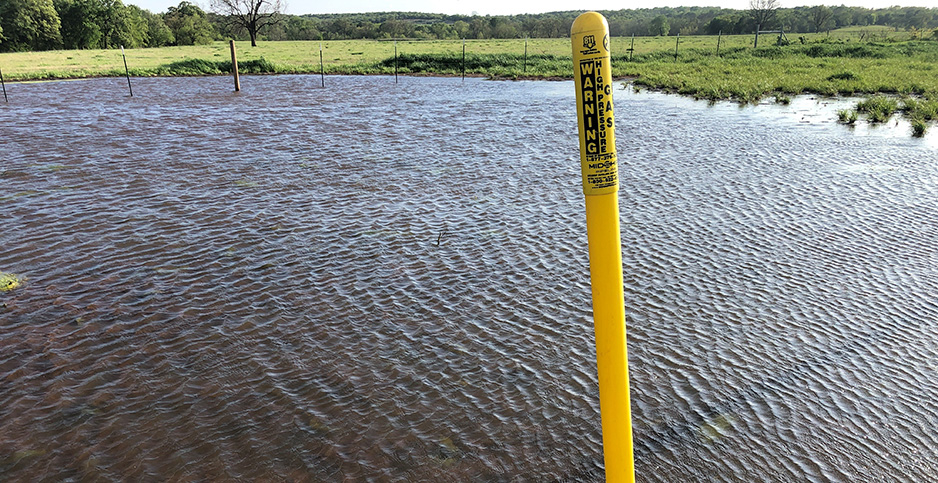 Pipeline markers show the path of Cheniere Energy Inc.'s Midship pipeline in Oklahoma. Landowners say flooding problems and other damage have not been fixed, even though the Federal Energy Regulatory Commission has cleared the pipeline to begin operations. Central Land Consulting

Federal Energy Regulatory Commission Chairman Neil Chatterjee says his agency has been doing a "great job" in speeding up the process for complaints from landowners in the path of pipelines.

But the agency won’t provide numbers to back that up, and an E&E News analysis of recent protests found many still move slowly. And landowner advocates say Chatterjee’s attempt at accelerating cases doesn’t get at the real problem.

"I don’t think that’s the way to help landowners," said Carolyn Elefant, who represents Oklahoma farmers and other landowners in the path of Cheniere Energy Inc.’s Midship natural gas pipeline. "You start with a more robust review. You supervise construction so their land isn’t damaged."

Long-standing FERC practice allows the agency to stall the protests of landowners while allowing pipeline companies to seize their land for construction. But that practice has come under increasing scrutiny in recent months.

A House committee is investigating FERC’s treatment of landowners. And a federal appellate judge last August called the legal limbo created by the agency "Kafkaesque." Her move led to a hearing yesterday in the U.S. Court of Appeals for the District of Columbia Circuit (see related story).

Chatterjee, a Trump appointee who has sought to tie FERC to the president’s aggressive energy agenda, says he’s worked to fix the problem. He says he has pushed for faster resolution of landowner cases and sought to limit "tolling" orders that stall the process.

To that end, Chatterjee directed the agency’s general counsel last September to prioritize the cases involving landowner rights. In February, FERC formally created a section of the general counsel’s office to deal with the protests, called "rehearing requests" (Greenwire, Feb. 3).

Chatterjee said in a statement last week to E&E News that creation of the new section has "significantly" shortened landowners’ wait for a decision.

Since September, the agency "has acted on the merits of rehearing requests in all new certificate rehearing cases, on average, in less than two months," Chatterjee said in the statement, which was relayed by a FERC spokeswoman. "So, I’d say they are doing a great job."

The agency press office said it could not supply figures to confirm the average processing time of less than two months cited by Chatterjee.

An E&E News analysis found that of seven pipeline hearing requests between Sept. 1 and March 1, only one — involving a Tennessee Gas pipeline upgrade — was decided within two months.

Four took longer — between 76 and 87 days. Two others are still in limbo. A request for rehearing on an Atlantic Bridge compressor station in Massachusetts is undecided after more than 120 days. A protest of the Mountain Valley pipeline has been pending for more than 200 days.

In all cases, the commission denied the opponents’ request for rehearing.

Protests of three liquefied natural gas terminals were handled faster. All three were denied in 60 days or less.

Another recent decision was handed down after 461 days. It was issued April 16, denying the protest of community groups and others opposed to a Williams Cos. gas compressor station project in New Jersey called Gateway Expansion. The station started operations more than three months before FERC’s decision.

Elefant filed a rehearing request protesting Cheniere’s Midship project in August, and FERC has not ruled on it. She said the slow-walking of the case "flies in the face" of suggestions that the agency has fixed the problem.

Cheniere has said restoration of the properties along the Midship line is 94% complete. But Nate Laps, a consultant who is working with the same landowners as Elefant, said it is less than 8% done on his clients’ properties.

"These negligent acts on the parts of Midship, FERC, and FERC’s compliance monitors have caused extensive and permanent adverse effects on properties that have been in some families for over 200 years," Laps said in a recent agency filing.

Cheniere spokeswoman Jenna Palfrey said the company is "still working on restoration activities, and our commitment to restoring land to the same or better condition as it was before construction has not changed."

Complaints about FERC’s treatment of landowners have come from several places.

The Environmental Defense Fund challenged the permit of a St. Louis-area pipeline in January, alleging that the pipeline wasn’t needed and that pipeline construction damaged land and water (Energywire, Jan. 23).

Democrats on the House Oversight and Reform Committee have opened a probe into whether landowners are given due process when pipeline companies take their land using a FERC certificate (Greenwire, Feb. 19).

D.C. Circuit Judge Patricia Millett criticized the agency’s "Kafkaesque" method of stalling landowner protests in the August 2019 pipeline case. After that, her colleagues on the court took the rare step of agreeing to rehear the case en banc — with all 11 members in attendance.

FERC argued in pre-hearing filings that the reorganization of the general counsel’s office to accelerate protests has improved the process. Critics said Chatterjee’s maneuver would be unlikely to impress the judges, but industry groups said changing the process could disrupt long-standing business practices and delay projects (Energywire, Feb. 27).