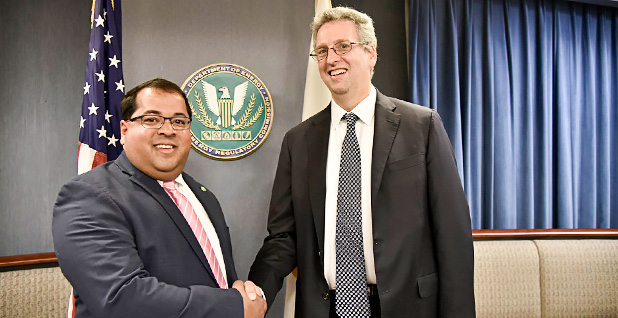 The ruling cleared a long-standing obstacle to landowners’ timely legal challenges in pipeline cases. The U.S. Court of Appeals for the District of Columbia Circuit barred FERC’s use of "tolling orders" to delay challenges, restoring a 30-day deadline for the agency to respond to landowners who object to its decisions by requesting a rehearing.

"Following the [D.C. Circuit decision] in Allegheny Defense Project v. FERC, we respectfully ask Congress to consider providing FERC with a reasonable amount of additional time to act on rehearing requests involving orders under both the Natural Gas Act and the Federal Power Act," Chatterjee and Glick wrote in a joint statement Thursday.

Landowner advocates cheered last week when the D.C. Circuit found that FERC could not use tolling orders, which one federal judge described as a "Kafkaesque" procedure that blocks challengers of natural gas pipelines and other projects from bringing their claims before a court, even as project construction moves forward (Energywire, July 1).

FERC has issued a tolling order for every rehearing request filed over the past 12 years. Every case was then eventually denied. On average, 212 days — about seven months — passed between the time a landowner made a request for rehearing and when FERC ultimately denied it. During that time, pipeline construction often continued (Energywire, May 27).

The commissioners said that while they feel they need more time to consider landowner and other protests, they clarified that construction would not proceed during that time.

"We believe that any such legislation should make clear that, while rehearing requests are pending, the Commission should be prohibited from issuing a notice to proceed with construction and no entity should be able to begin eminent domain proceedings involving the projects addressed in the orders subject to those rehearing requests," they wrote.

Amid mounting criticism, FERC had previously taken steps to address the issue. Among other efforts, the independent energy regulator issued a rule last month aimed at stopping companies from beginning construction on FERC-approved infrastructure projects until the commission dealt with landowner objections (Energywire, June 10).