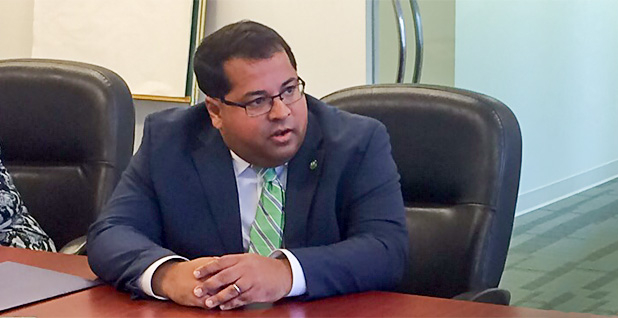 When the Federal Energy Regulatory Commission responds to a proposed rule to value baseload coal and nuclear plants — and potentially provide cash subsidies — Chairman Neil Chatterjee insists that his agency’s action be able to withstand the inevitable legal challenge.

"Whatever action we take, I want to be absolutely certain that it will withstand legal scrutiny. And that takes time," Chatterjee said yesterday during an interview with E&E News reporters.

That likely means FERC will take until a deadline of Dec. 11 to render its decision on what to do about a directive issued by Energy Secretary Rick Perry in late August. It directed that the agency expedite consideration of a proposed rule to subsidize coal and nuclear plants that face being driven out of business by cheaper energy alternatives such as natural gas and renewables (Energywire, Oct. 2).

Perry argued that current conditions in the markets regulated by FERC make it difficult for many coal and nuclear plants to compete, pointing to the accelerating pace of plants being shut down by their owners because they could not make money.

Coal and nuclear plants are unique, Perry said, because they store their fuel on-site, unlike natural gas plants, which depend on just-in-time delivery through the nation’s network of pipelines.

DOE’s notice of proposed rulemaking, or NOPR, attracted more than 500 comments at FERC by an Oct. 23 deadline. Parties wishing to respond to the initial comments have until Nov. 7 to do so, and then the agency staff will craft alternatives for the commission to consider.

Now in his third month as chairman, Chatterjee, a former energy adviser to Senate Majority Leader Mitch McConnell (R-Ky.), spoke of the "volume of work and significance of work" that has prevented him from developing any sort of routine since being sworn in.

In addition to the NOPR, Chatterjee and his fellow commissioners have been working through a backlog of hundreds of cases that were awaiting the restoration of a quorum at the agency since February.

FERC is "about three-quarters of the way there. Sooner rather than later, we’ll be caught up and through the backlog," he said.

Chatterjee said he "was pleased not just with the quantity but the quality of the comments that came in" on the NOPR.

He especially welcomed constructive suggestions "on how we could potentially navigate things" in response to DOE and the wide range of industry concerns.

"These are not new issues, these are all things that [FERC] has been studying and discussing at length for years now. These are the kind of complex, vexing questions that if you don’t tackle them head on they can linger forever and be punted into perpetuity," he said.

The third option is one that several former members of FERC have suggested is the most likely.

"The comments are helping us navigate those options. And if we are going to commence our own process, we have a sense of what that could look like," he said.

"We’re getting ahead of ourselves on how we might actually execute the policy, but there are ways we can work" with regional electricity market operators, such as having the "regions come into us," or FERC could launch a proceeding under the Federal Power Act looking at whether exiting market rules are just and reasonable and ask the regional operators to "come back to us" on the question, Chatterjee said.

One possible action by FERC would be to ask the industry to define the term resilience, for which there is no generally accepted industry definition.

"It’s at the core of what we’re discussing here," Chatterjee said of the term, which is not to be confused with reliability.

"It’s entirely appropriate for FERC to look at the long-term questions about how short-term market dynamics might force plants to close that might be needed years down the road for reliability, national security or the ability to bounce back after a natural or man-made disaster," said Chatterjee.

"I’m a strong believer in markets, but the markets today aren’t what they were two decades ago. The tricky part is that the markets are working today," but "we need to understand what the long-term implications would be" if coal and nuclear plants keep closing, he said.

"What I’m talking about here isn’t putting a thumb on the scale to favor one fuel source over another. That’s not what we’re contemplating," he said.

Chatterjee acknowledged that as demand for electricity is flat or even declining in some places, the battle by generators for market share has broken into a very public and political battle, especially between the coal and natural gas industries.

"I’m not going to advise them on their political strategy and how to handle these things," he said.

"But I don’t think that their macro political battle will impact what we do. We will make our determinations based on the record in a fact-based manner and aren’t going to be influenced by outside political forces," Chatterjee said. "I think the political battle that’s occurring — at least as it pertains to FERC’s role — is totally overblown."

He does not believe that a solution to the issues raised by Perry amounts to "a zero-sum game where there’s a clear winner and a clear loser."

"If we make a determination and the facts bear out that certain generating sources are necessary for long-term resilience, reliability and security, that doesn’t have to come at the expense of another generating source," Chatterjee said. "If we do it right, we’re not going to distort the existing marketplace."

He emphasized that he is "excited about innovation and the advancements that are being made" in terms of renewables and energy storage.

"I want to dispel this notion that because I’m from Kentucky and because I worked for [Majority] Leader McConnell that I’m somehow hostile to renewables. That couldn’t be further from the truth."

During consideration of the NOPR, Chatterjee said he is determined to prove mistaken observers who say, "’Well, he’s McConnell’s coal guy so he must have already prejudged this.’

"That’s just not true," he said. "Whatever decisions that we make, we will make within the bounds of the statutes that govern the agency and will be independent and fact-based and data-based.

"Just because I as an individual may have my own political views and those views may align with the administration or Sen. McConnell or others, that doesn’t mean that in any way I’m ceding the independence of the agency," Chatterjee said.