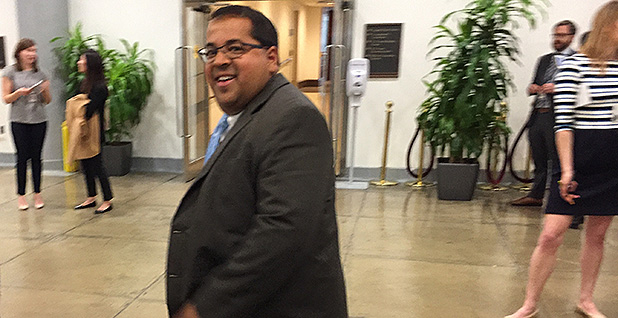 "It is with a heavy heart that I step into this role while my friend and colleague, Kevin McIntyre, focuses on what’s most important: his recovery and his family," Chatterjee said in a statement.

Sources have speculated for weeks that McIntyre, who revealed earlier this year that he’s suffering from a brain tumor, would relinquish his leadership role (Greenwire, Oct. 18).

In a letter dated Monday but released publicly last night, McIntyre signaled to President Trump that he plans to remain on the five-member panel as a commissioner. Although McIntyre’s term doesn’t end until June 30, 2023, sources say he may decide to leave earlier.

The president’s designation is significant considering that Chatterjee’s current stint as a FERC commissioner extends through June 30, 2021, and he could lead the agency for the remainder of Trump’s first term.

Trump has tapped Bernard McNamee, 51, executive director of DOE’s Office of Policy since June, to succeed Powelson. He previously served at DOE from May 2017 to February 2018 as a political appointee in the general counsel’s office.

"I’m confident that Chairman Chatterjee will once again effectively lead the agency, and I will work with my Senate colleagues to restore a full complement of commissioners as quickly as possible," said Sen. Lisa Murkowski of Alaska.

University of Richmond energy law professor Joel Eisen said he’s concerned that the president’s choice to tap Chatterjee may continue the "ongoing politicization" of the commission, pointing to the administration’s push to offer financial lifelines to struggling coal and nuclear plants.

"I don’t think he’s interested in giving bailouts to coal and nuclear," said the lobbyist. "Nothing he’s said in the last six months would support that opinion. I think it’s overblown."

Republican energy lobbyist Mike McKenna cautioned against speculating about Chatterjee’s focus, emphasizing that the shift in chairmanship is occurring under difficult circumstances.

"Any thoughts he has about what to do next are going to be tempered by his need to process some of this emotionally. There’s going to be a period of time where he gives some deference to Chairman McIntyre," said McKenna.