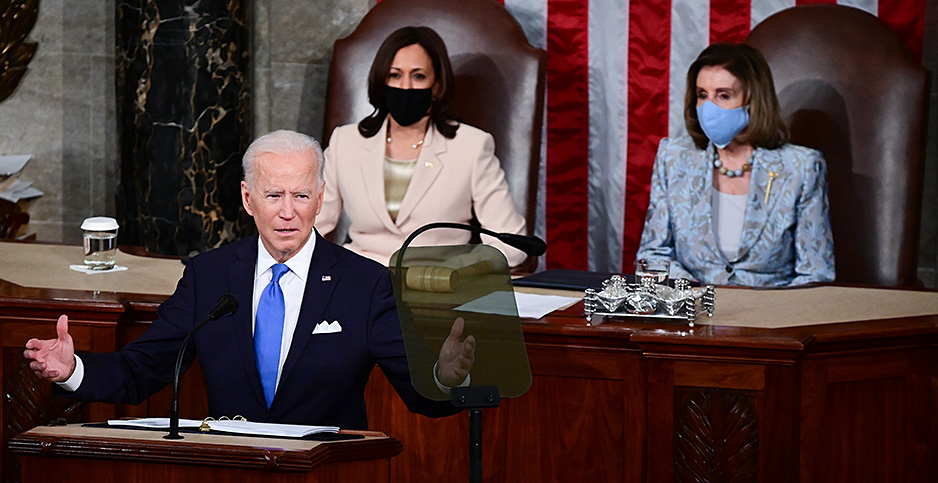 On the eve of his 100th day in office, President Biden used his first address to Congress to illustrate his quick start out of the gate, referencing climate change far more than his predecessors and aiming to balance his bold vision with his moderate sensibilities.

Reactions to his speech ranged from celebratory to downright appalled. While greens generally rejoiced, Republican politicians labeled Biden’s defense of government action on COVID-19 and climate change as "socialist."

Presidential addresses tend be to light on specifics, and some observers paid more attention to terms that he didn’t utter: "environmental justice," "regulations" and "science" among them. Still, others noted, it is still early to know how his presidency will take shape.

"I see two sides to President Biden: The first is a peacemaker who wants to restore bipartisan collaboration. It is genuine, and it is based on his personal connections that he developed in the Senate," said Alex Flint, a conservative climate lobbyist. "I also see a president who wants to be effective and who hasn’t yet had the opportunity to do a bipartisan deal and so is inevitably left only with the option of pursuing progressive policies."

He added: "I don’t think we’ve determined what course we will pursue for the next two years. It’s still an open issue."

He spoke directly to farmers — many are climate skeptics who have moved away from the Democratic Party — saying they could plant cover crops to reduce carbon dioxide and get paid for it.

He acknowledged that the United States produces just 15% of the world’s greenhouse gas emissions, a nod to Republicans who argue that the country should not be the only one carrying the burden for the rest of the world.

And, of course, he talked about jobs.

Yet Biden did not use the term "environmental justice," even as his administration has elevated the issue to the highest level, convening the second four-hour White House Environmental Justice Advisory Council meeting just yesterday.

Mustafa Santiago Ali, a longtime environmental justice advocate, said he was surprised the term wasn’t specifically called out but understood how it was integrated into other areas — i.e. replacing lead pipes throughout the country.

Though, he added, "Not calling it out misses educational opportunities to link each of the items highlighted to real world challenges and opportunities moving forward."

More broadly, Ali thought Biden gave a "comprehensive speech that highlighted the big challenges we face as a country but an even larger set of opportunities. It centered the impacts of racism in its many forms but also pointed us toward a North Star where the injustices of the past no longer have to be a part of our future."

Also conspicuously absent was the term "regulation," even though experts agree strong environmental protections will be necessary to achieve his climate goal of cutting greenhouse gas emission by 50-52% by 2030.

Regulations have long been a sticking point among Democrats, with former President Obama famously conveying caution on the matter.

James Goodwin, a regulatory scholar at the Center for Progressive Reform, noted that Biden avoided the word "as if it were a leper in a hot tub," which he said he found both logical and disappointing.

Biden also did not mention his oil and gas leasing pause or calls to end fracking on public lands. His top officials have consistently talked about the oil industry as having a seat at the table — a posture progressives don’t share.

Kyla Bennett, a director at Public Employees for Environmental Responsibility, said the president made a lot of great remarks on environmental policy, but she still expressed reservations.

"Words are meaningless without corresponding action," she wrote via email. "And I am not seeing strong enough actions."

She noted EPA Administrator Michael Regan — in a similar unifying vein — has said he wants to compromise on the "Waters of the U.S." regulation, which Trump weakened. "This is not going to give us clean water (or protect us from flooding)."

She added: "He said climate change has to be a global fight — and it does. We are at an ‘inflection point’ — and yet, he’s not banning fracking, he’s not shutting down the Dakota pipeline, and frankly, a 50% – 52% reduction by 2030 is not enough."

Similarly, Kassie Siegel, director of the Climate Law Institute, appreciated his rhetoric about a full-scale mobilization on climate: "He’s finally gotten our country off the starting line, but he needs to pick up the pace by declaring a climate emergency and using all of his authorities to keep fossil fuels in the ground."

Yet others remain optimistic.

They say Biden’s ambitious goals without too many specifics could give Republicans a chance to provide input.

As Dan Weiss, a veteran environmental consultant put it, "Biden set the goals, giving Congress the flexibility to design and pass the measures essential to achieve the goals."

After all, after 36 years in the Senate, Biden has many friends in the upper chamber — relationships that have often been on public display.

When he eulogized the late Sen. John McCain, he stopped several times to reference McCain’s longtime friend, Republican Sen. Lindsey Graham, who was sitting in the audience: "Isn’t that right, Lindsay."

"He has those sorts of relationships," Flint said, even if Graham and Biden have grown apart.

After the speech last night, Graham decried that the modern Democratic Party revolves around "government."

He recently went to Fox News to complain. "AOC said his first 100 days exceeded her expectations. That’s all you need to know," Graham said, referring to Rep. Alexandria Ocasio-Cortez (D-N.Y.).

Others still hold out hope that environmental issues could make some headway in a divided Congress. After all, yesterday Graham was one of three Republicans to buck the party and support a Democratic effort to reverse a Trump rollback on methane regulations — critical, environmentalists say, to combating the climate crisis.