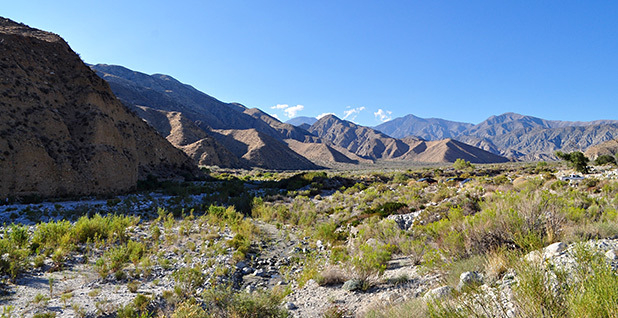 The Obama administration is considering a proposal from Sen. Dianne Feinstein (D-Calif.) to designate more than a million acres of Southern California desert near Palm Springs as three new national monuments. Photo by Jeremy P. Jacobs.

The California Democrat has fought for more than six years to establish the Sand to Snow, Mojave Trails and Castle Mountains monuments.

The designation would cover 1.1 million acres and be Obama’s largest under the 1906 Antiquities Act.

At a public hearing at the Whitewater Preserve, Feinstein emphasized she prefers her legislation, which would protect more than 1.4 million acres and preserve existing off-highway vehicle use.

But "the present political climate is proving extremely difficult to move any public lands legislation through both houses of Congress," she said, leading her to ask the president to designate the lands should her bill fail.

The remarks drew both loud cheers and boos from the testy crowd sitting outside on a 97-degree day.

"Some people say you are taking this away from us," she said. "It’s exactly the opposite. What we are trying to do is protect this land for you."

The monument designations would carve out three swaths from just north of Palm Springs to the Nevada border, including wild lands, Joshua and juniper trees, and prehistoric lava flows that would be protected from new mining and other industrial activities like solar and wind farms.

Feinstein has introduced S. 414 to protect the three areas. But frustrated with gridlock on Capitol Hill, she has also pressed Obama to use the Antiquities Act to designate the monuments by executive action.

Before making designations in Nevada, California and New Mexico that each spanned hundreds of thousands of acres, Obama sent Connor or other senior officials to public hearings on the proposals.

Connor provided few hints about whether and when such a designation for the three new monuments in California could come.

In brief remarks, he said he visited some of the landscape in the morning and called it a "truly spectacular place."

"I see the beauty of the landscape and very much appreciate it," he said.

He added that the president will ultimately make a decision on whether to make the designations after Interior and USDA make recommendations.

"It is a process that we take very seriously," he said. "But, quite frankly, I would just note for the record that we do support Feinstein’s legislative efforts."

But if the bill stalls, he said, "we have to think about other ways to protect a landscape of this magnitude and importance."

And he pointed out that the Antiquities Act has frequently been used by presidents to protect national treasures — including the Grand Canyon, which was originally designated under the law.

But designations by executive action have sparked significant criticism from Republicans on Capitol Hill, who say the president is abusing his authority and protecting areas that are not under threat.

Those concerns were given full voice yesterday on placards reading "No Antiquities Act!" and "The Public Deserves a Vote!" displayed on the road to the hearing.

California Republican Rep. Paul Cook’s chief of staff, John Sobel, told the crowd that his boss believes designating the monuments by executive action would create "second-rate monuments because they lack the adequate support of locals and of Congress."

Cook has introduced H.R. 3668, a companion to Feinstein’s bill that would allow more mining opportunities and bar designations under the Antiquities Act. Environmental groups strongly oppose the bill because of the mining provisions.

Sobel said his office was "not yet convinced" that the public supports the new monuments, remarks that drew a chorus of boos. He added that Cook isn’t sure that new economic activity from tourism would replace mining.

Cook, Sobel said, is "absolutely committed to a legislative solution. Please do not assume that we will fail in that effort."

Others said using executive action stymies what should be a transparent process.

Jim Bagley, 59, a Realtor and former mayor of the city Twentynine Palms, said in an interview that each monument should be considered separately and legislatively.

Bagley, who has followed Feinstein’s efforts since the mid-1990s, said the administration seems to be saying, "We’re going to dictate to you."

There was also significant local support for the designations among those who have fought for years for the protections.

Eva Soltes, 67, who formerly sat on Joshua Tree’s Chamber of Commerce, said "designation means destination" and that the monuments would spur visitors to the San Bernardino mountain range and desert.

Feinstein’s legislation would protect desert habitat for tortoises, bighorn sheep and golden eagles. It would also establish conservation of parts of the Pacific Crest Trail and Route 66.

In often combative remarks, Feinstein attempted to take on what was at times a hostile crowd.

She has worked diligently to reach compromises with interested parties, she said, such as off-road vehicle organizations. Presidential designations do not guarantee access for motorized recreation as Cook’s and Feinstein’s legislation would.

Feinstein emphasized that off-highway vehicles will be able to continue to use the same trails under a designation.

And with regard to mining, she said access to existing mines would remain available.