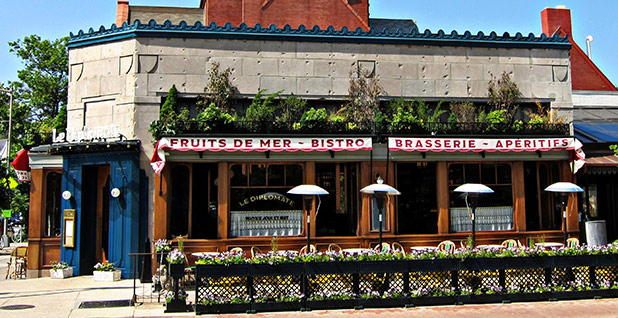 "Le Diplomate is his favorite!" one of EPA boss Scott Pruitt's aides said in an email, referring to the swanky Washington, D.C., restaurant. NCinDC/Flickr

For many locals, a posh French eatery on a bustling street in Washington, D.C., is a neighborhood hangout. Others view it as a place to be seen in a town where residents crave status and cultural cachet.

But to EPA Administrator Scott Pruitt, this particular restaurant is very clearly one thing.

"Le Diplomate is his favorite!" Michelle Hale, an executive assistant for Pruitt, said in an email to Republican energy lobbyist Mike McKenna last year. McKenna was trying to find a spot to meet with the EPA administrator.

The comment, revealed in internal EPA emails recently released to the Sierra Club, has reignited criticism concerning Pruitt’s affinity for the Parisian-styled bistro and his security practices.

One of the many media stories detailing alleged ethical problems included Pruitt requesting his driver use an emergency siren and flashing lights to clear the oft-clogged 14th Street NW so he could get to Le Diplomate. His security detail refused.

"It’s just way too far to go for food that I’m kind of meh about," McKenna said in a recent interview. (Lucky for McKenna, the restaurant was fully booked that night.)

Philadelphia-based restaurateur Stephen Starr opened the French bistro in 2013 in the Logan Circle neighborhood, just as D.C.’s food scene was beginning to gain wider recognition and accolades. It instantly became D.C.’s buzziest dining spot and has maintained its prominence even as locally grown talent has increasingly satiated taste buds here.

The restaurant is a sort of cultural lightning rod. In a city where politics dominates, the eatery is in many ways associated with the Obama administration, since it opened during President Obama’s tenure, said Laura Hayes, food editor with the Washington City Paper. Obama and first lady Michelle Obama even dined there with then-French President François Hollande in 2014. It’s "a gathering spot for politicos," Hayes said. Former Secretary of State John Kerry, press secretary Sarah Huckabee Sanders and ex-National Economic Council Director Gary Cohn are also known to have eaten there.

"It’s become this kind of status symbol for people who have time to leisure and brunch and see and be seen, order an opulent seafood tower, and then come back a couple days later and casually order a burger," said Hayes, who noted the restaurant’s success is unique considering Washingtonians have traditionally shunned restaurants from out-of-towners. "I think it’s like that magic spot of being both sought after by travelers who are visiting and also a local hang. You see all age groups."

It’s easy to be seen. Diners can opt for outdoor two-toppers practically spilling into 14th Street NW or snag a coveted spot on its open-air patio facing Q Street NW. Inside, a whirlwind of waiters weave through aisles and around tables in their uniforms of white button-down shirts and black pants to deliver wicker baskets of freshly baked bread, steak frites and the occasional aforementioned seafood tower.

The neighborhood is one of the more upscale parts of the city, stocked with million-dollar-plus condos, boutique clothing stores, furniture shops, SoulCycle, expensive restaurants and a Whole Foods.

Bock was having drinks Monday night with a friend a half-block from Le Diplomate at Drafting Table, a casual bar frequented by soccer fans. Her friend, Julie, was aware of Pruitt’s love for the eatery, happily relaying the story about his plea for an emergency siren to Bock.

"I don’t think it’s that good," she said of the French restaurant.

One thing is undeniable — the business is good. Le Diplomate brought in more than $16 million in sales last year, giving it the 49th highest sales among independent restaurants in the country, according to industry publication Restaurant Business. And at an average check of $58, it came out as a much greater bargain than many other high-earning restaurants.

Le Diplomate did not return a request for comment.

"I thought it was pretty good, perfectly decent food that feels kind of high end," said Andrea Tang, 27, a local who has eaten there. "It’s an accessible sort of high end."

It’s accessible enough that people with a relatively moderate salary — say, journalists — can rub elbows with government officials who run the country.

Politico Playbook has included the EPA chief’s appearance at Le Diplomate in the "SPOTTED" portion of its daily newsletter at least three times, including right after President Trump’s announcement to withdraw from the Paris climate accord.

Pruitt might have an even harder time flying under the radar these days. The administrator has caught flak for enjoying some of life’s finer things. Media reports indicate Pruitt and aides spent hundreds of dollars each on a meal footed by taxpayers in Rome. He’s also come under fire for flying first class instead of coach — even on domestic flights — staying in swanky hotels and mixing personal travel with business.

"I’m not sure I would recognize him — well, I wouldn’t have recognized him in the past," said Barry Clark, a 54-year-old who eats regularly at Le Diplomate. "He’s been in the news a little more."

That’s created problems for a Trump administration that has tried to position itself as anti-Washington and anti-elite. White House aides have grown increasingly frustrated with various ethical missteps by Pruitt, who is under several federal and congressional investigations. Some reports indicate Trump is also souring on his EPA head.

In that context, while the restaurant isn’t cheap for the average American — the cheeseburger runs $17 — there are far more expensive joints in D.C.

Overall, though, it’s a destination for Washingtonians and out-of-towners alike. The restaurant is ranked as the seventh-most popular attraction in D.C. on Yelp, one spot ahead of the Lincoln Memorial.

A return to the restaurant was tops on the to-do list for Cindy Nichol, 59, and Shannetta Griffin, 56, who were in town this week for a conference. Nichol, who is from Oregon, and Griffin, from Ohio, recalled enjoying the food on their last trip to D.C. and decided to try for a repeat.

Both were unaware Pruitt shared their sentiments.

"The Lower Willamette Superfund site," she said over her shoulder, referring to the Portland Harbor, as she entered the front door. "We need it cleaned up."