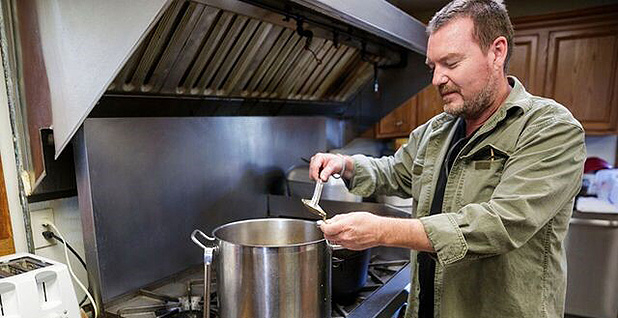 Dana Honn, the owner and operator of Carmo in New Orleans, fears that Congress may weaken federal fishery management by passing the "Modern Fish Act." A Senate committee will vote on the bill Wednesday. Sophia Germer/Special to E&E News

Priced at $32, the pan-roasted Gulf red snapper with coconut rice and Malaysian curry sauce is among the best-sellers at Carrollton Market in New Orleans.

But chef Jason Goodenough worries that it could someday disappear from his menu, if Congress goes too far in loosening regulations and allows more overfishing of the stock.

"On the macro level, my fear is that tourism is going to drop off because less and less Gulf seafood is available to us as chefs," said Goodenough, named the 2017 chef of the year by New Orleans Magazine. "People come to New Orleans to eat, to drink and to hear music — food tourism is a major, major part of the fabric of the economy."

Goodenough is one of 26 chefs, most of them from New Orleans, urging Congress to put the brakes on any proposed rollbacks of federal laws that protect fish populations.

Their latest target is the "Modern Fish Act," which is set for a vote Wednesday by the Senate Commerce, Science and Transportation Committee.

Backers of S. 1520, sponsored by Sen. Roger Wicker (R-Miss.) and formally known as the "Modernizing Recreational Fisheries Management Act of 2017," say it would give sports anglers more access to federal waters.

While many recreational anglers cheered the Trump administration for extending the Gulf red snapper season by 39 days last year, they regarded the move as a temporary fix. They’ve touted the "Modern Fish Act" as a permanent solution and a much-needed way to bring more flexibility to fisheries management (Greenwire, Dec. 19, 2017).

Opponents, including the chefs, say the bill would weaken federal protections and result in more overfishing, damaging stocks in the long run.

Jeff Angers, president of the Center for Sportfishing Policy in Baton Rouge, La., said it is "utter folly to think that chefs are interested in conservation."

"I know that it’s going to be of a lot of interest that some chefs want to pick a fight — ‘bless their hearts’ is what my mother taught me to say," he said. "But I don’t think any responsible person in America looks to chefs who profit from these fishery resources to be guiding any discussion on conservation."

Recreational fishermen have long complained that the nation’s premier fisheries law, the Magnuson-Stevens Fishery Conservation and Management Act, has become too bureaucratic, fixated on quotas and catch limits.

They say the "Modern Fish Act" would give regulators at NOAA Fisheries new ways to set rebuilding timelines for fish stocks while relying on updated science and technology.

"This is not a red snapper bill," Angers said. "This is a systemic change that we are trying to bring to an agency that is stuck in 1976, when the act was first passed."

Both sides are accusing each other of trying to advance elitist interests.

Dana Honn, the owner and operator of the restaurant Carmo in New Orleans, said the "Modern Fish Act" would benefit sports anglers and mark "a step toward a reallocation of a natural resource to a smaller and smaller group, and ultimately out of the hands of the public."

"We know who’s benefiting from cheap product taken by commercial harvesters — it’s the chef who charges $25 for a fancy meal at a French Quarter restaurant," Angers said. "The last people on Earth that I would go to for guidance on fisheries management are chefs and fancy restaurateurs in New Orleans."

The dispute has been playing out in Louisiana for months.

In December, Honn ignited a furor among recreational anglers when he wrote an opinion piece that defended the Magnuson-Stevens law and criticized the Trump administration for extending the season for Gulf red snapper in federal waters by 39 days last year. Its headline: "Red snapper imperiled by Trump team’s gift to the yachting set."

David Cresson, the executive director of the Louisiana Coastal Conservation Association, fired back in an opinion piece of his own, saying a "small yet vocal group is trying to disrupt the progress of badly needed reforms."

Cresson said Friday, "To claim, as some chefs have, that recreational anglers are in favor of overfishing is nonsense."

He said the association’s members and other recreational anglers have "put in countless hours and dollars a year supporting conservation and habitat restoration," adding: "We are not here to catch the last fish. We are here to ensure healthy fish stocks and clean waters are available for future generations to enjoy."

Honn said the push by CCA and other groups to lengthen the red snapper season set back the recovery of the species by years.

"Where’s the logic in that?" he asked. "A lot of eyes are on this, not just in the Gulf, but fisheries around the country. … There are a lot of recreational fishermen down in this area, and it really is a rarified group that is being represented by CCA."

Goodenough said the Trump administration’s extension of the red snapper season was "based on alarmism and emotion" instead of science.

"American red snapper is a national treasure," he said. "We think as chefs we’re the voice of the silent majority, and we’re trying to reframe the argument to represent the American public in keeping this national treasure available to people who want to eat it and deserve to eat it."

As the markup nears, the American Sportfishing Association called it an "all hands on deck" moment on Friday, urging its members to use an "advocacy toolkit" with sample messages and social media suggestions to lobby members of Congress.

One other fisheries bill is on tap in the Senate this week. On Wednesday, the Energy and Natural Resources Subcommittee on Water and Power will hold a hearing to take testimony on the "Endangered Fish Recovery Programs Extension Act," S. 2166, sponsored by Sen. Cory Gardner (R-Colo.).

It’s a companion to a House bill, H.R. 4465, that would maintain funding for the Upper Colorado and San Juan fish recovery programs through 2023.

Backers say the legislation is also needed to support millions of people who depend on the Colorado River for electricity.