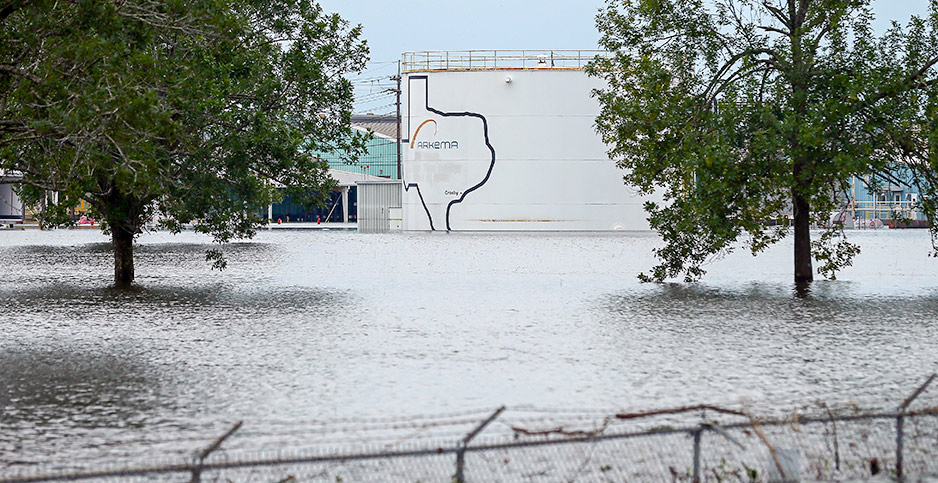 The Arkema Inc. plant in Crosby, Texas, was flooded from Hurricane Harvey, and the chemicals stored there have caused explosions. Godofredo A. Vasquez/Houston Chronicle via Associated Press

This story was updated Friday, Sept. 1.

A burning chemical plant northeast of Houston today may reignite debates over federal and state efforts to limit public access to information about facilities that house potentially dangerous substances.

One deputy who responded to the fire in Crosby, Texas, was "taken to hospital after inhaling fumes," the Harris County Sheriff’s Office tweeted. He and 14 other first responders complaining of "respiratory irritation" have since been treated and released, the sheriff said.

But if U.S. EPA had implemented a final industrial facility safety rule, none of the officers would have been at risk, said Mathy Stanislaus, who led the agency’s Office of Solid Waste and Emergency Response during the Obama administration.

The rule would have made "sure that the local responders were fully aware of the particular chemical and the particular method to respond to an incident," he said.

It also would have strengthened efforts to head off accidents and done more to keep the public informed of potential risks at plants, said Stanislaus.

"This was a modest first step of addressing safety for first responders and localities," said Stanislaus, who helped draft the rule. He is currently a senior adviser at the World Economic Forum, a Swiss foundation promoting public-private partnerships.

Administrator Scott Pruitt prevented the safety rule from taking effect until 2019 to allow the agency time to reconsider industry objections.

Companies claim it would be costly and could allow sensitive information to fall into the wrong hands. Environmental groups and some states are fighting the delay in court (E&E News PM, July 24).

In a statement about the chemical plant explosion, Pruitt said, "EPA’s focus is on the safety of those around the facility and we urge those in the area to follow the safety instructions of local authorities."

The Texas Commission on Environmental Quality warned residents in a news release that "the smoke from the fire is especially acrid and irritating. Those with heart problems or respiratory conditions, such as asthma or emphysema, may be particularly sensitive."

The state agency is urging people to limit their exposure to the smoke but said there "is minimal risk of long-term health problems."

First responders and residents may also have been caught off-guard by the chemicals in part because Texas Gov. Greg Abbott (R), during his time as state attorney general, restricted access in 2014 to annual reports on facilities that house large quantities of potentially dangerous chemicals. He cited terrorism concerns.

Those so-called Tier II reports were once available upon request to any member of the public, the Houston Chronicle reported.

The nonprofit Center for Effective Government has argued that posting all risk-management plans and Tier II reports online would make it easier for first responders and the public to make sense of the information.

CEG maintains its own website that hosts EPA’s risk-management plans, but the agency does not have such a service of its own (Greenwire, April 16, 2015).

The American Chemistry Council didn’t respond to a question about whether additional regulations would have better protected Harris County officers and Crosby residents. But the lobby group, which counts Arkema as a member, defended Arkema’s response to Hurricane Harvey.

"The company has worked closely with local officials and the surrounding community to provide updates and mitigate risks presented by the flooding of its Crosby site," ACC President and CEO Cal Dooley said in a statement. "In the coming weeks we will evaluate all learnings from this unprecedented hurricane and the resulting flooding, to assess if there are additional procedures and process safety efforts that could further inform and enhance the safety performance of our operations in the future."

Chemical safety advocates said the incident showed the shortcomings of the recently passed overhaul of the Toxic Substances Control Act and the dangers of EPA budget cuts.

The TSCA reauthorization bill was a compromise package, which had the support of chemical companies and some public health groups.

But James Goodwin, senior policy analyst at the Center for Progressive Reform, believes the final version may have left communities at risk in the aftermath of the plant explosion.

"At the time of its passage, many of us in the environmental community predicted that it was just a matter of time before the practical consequences of the weaker reform bill — particularly for the working-class families that live along the fence lines of chemical plants — would bear out," he said.

Other legislation that mandated quicker reviews of existing chemicals "would have offered us a better tool for obtaining this information," Goodwin added. "Now, and later during the massive cleanup effort, we’re going to wish we knew a lot more about what hazards these chemicals pose so that we can address them properly and keep cleanup workers safe."

"If Congress goes along with the massive cuts to EPA that the Trump administration has proposed, they will be putting the health and safety of the American people at risk," she said.

"EPA plays an essential role in protecting our air and water and responding to emergencies like Harvey," Vogel said. "We will desperately need a fully functioning agency to help rebuild a safe and resilient Houston."