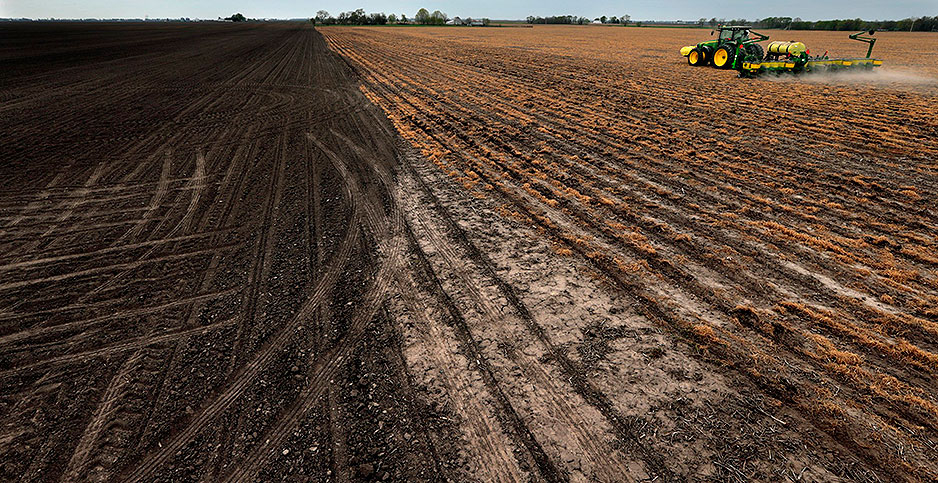 A traditionally tilled farm (left) lies next to a no-till operation in Auburn, Ill. To support no-till, farmers rely on herbicides like glyphosate. Robert Cohen/TNS/Newscom

The Department of Agriculture’s campaign to stop farmers from digging up the soil is running into an obstacle: the chemicals the agency promotes to kill weeds.

Stymied by weeds that have become resistant to common herbicides, farmers in some areas are turning away from no-till agriculture. They are returning to the plow, giving up on the benefits no-till offers for soil health, water conservation and dulling the effects of climate change.

The unfolding trend has begun to capture the attention of agricultural scientists and, as a recent congressional hearing showed, lawmakers and Agriculture Secretary Sonny Perdue.

"We obviously need less tillage rather than more tillage," Perdue said at the recent House Agriculture Committee hearing, responding to questions from Rep. Kim Schrier (D-Wash.), who warned about the effects in her own state.

The issue represents a delicate balance for agriculture.

Soil scientists agree that tilling disrupts the structure and microbiome — small-scale life in the ground — that helps crops grow, while releasing carbon into the atmosphere. But to support no-till, farmers rely on herbicides like glyphosate, also known by the brand name Roundup, to fight competition from weeds.

Further complicating the picture, farm chemicals go hand in hand with another conservation measure cheered by soil scientists and USDA: cover crops, which help prevent erosion and control weeds when the main crop isn’t in the ground. Farmers use herbicides to kill the cover crop before planting.

On top of that, some farmers are turning to a double solution — using herbicides that are tilled into the ground before planting, said Calvin Trostle, an agronomist with the Texas A&M Agrilife Extension Service.

New farm chemicals are part of the solution at USDA. But they bring other risks: Glyphosate is entangled in lawsuits over charges that it may cause cancer, an alleged link EPA disputes. Another herbicide, dicamba, is notorious for spreading to fields where it’s not intended, killing soybeans or other crops.

Groups such as Beyond Pesticides and the Pesticide Action Network North America regularly fight the introduction of new chemical weedkillers, noting that their overuse can lead to resistance.

The list of resistant weeds continues to grow, including giant ragweed and water hemp. One of the biggest culprits is Palmer amaranth, also known as pigweed. At one time, as few as one pigweed plant in 10 million would be resistant to an herbicide, Trostle said. Now it’s increasingly resistant to glyphosate.

That’s become the case in the Pacific Northwest, according to researchers at Washington State University, due to the diversity of the region’s crops and the area’s climate.

Schrier said she’s worried that farmers there and in other areas where weeds are especially resistant will decide that returning to the plow is the most cost-effective way to beat them.

"This goes against all the modern science of soil health," Schrier said, adding that she’s concerned about the effect on water quality in the Snake and Columbia rivers, for instance.

Congress has tried to encourage more use of no-till or reduced tillage through farm bill programs. Two USDA conservation initiatives — the Conservation Reserve Program and the Environmental Quality Incentives Program — help farmers practice no-till and other methods. The 2018 farm bill increased emphasis on those measures.

‘All is not lost’

Herbicide resistance isn’t the only threat to no-till, said Neal Eash, a professor of soil science at the University of Tennessee in Knoxville. The use of no-till methods on corn is steadily decreasing, he said.

Although reduced tillage is a more climate-friendly solution, climate change is actually pushing farmers in the opposite direction, Eash said. Farmers worried about spring flooding dig up the soil to make it drier and warmer, allowing for earlier planting, he said.

In other cases, Eash said, ever-higher yielding corn plants create more residue on fields. It breaks down slowly, and some farmers have decided to till the top 2 or 3 inches of soil while dicing up the leftover stalks, a method that encourages erosion, he said.

"However, all is not lost," Eash said. "Farmers just need more incentives for no-till."

That’s especially true for corn farmers, who are more likely to be drawn back to plowing, he said. Soybean farmers, on the other hand, have little reason to till because soybean plants don’t leave much residue in the first place.

The ideal solution, he said, is to offer farmers incentives to use no-till and to plant grass for the winter, which would mitigate climate change by building carbon in the soil.

Research into herbicide resistance may offer solutions in the long term.

Whatever makes morning glory tolerate glyphosate could offer clues to the broader problem of herbicide resistance, said the lead author, University of Michigan plant ecological geneticist Regina Baucom, in a news release announcing the study. Their work was published in the journal PLOS Genetics in February.

"If morning glory is detoxifying glyphosate or the products of glyphosate, it might make other herbicides less likely to work, since they too may be detoxified," Baucom said.

Perdue said the answer may lie in biotechnology as scientists develop ways to control weeds without disrupting the soil. He said the approach requires coordination with other agencies such as the Interior Department’s Fish and Wildlife Service and EPA, which approves and regulates pesticides.

"As things become more resistant, we don’t want the answer to be more tillage and more plowing," Perdue said. "We want it to be more no-till and using these safe products to control the problem."