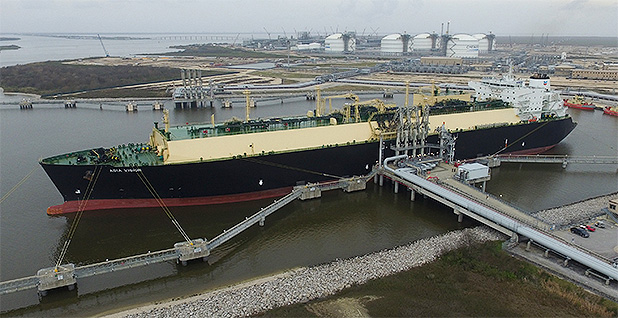 Officials with the Pipeline and Hazardous Materials Safety Administration had cited potential hazards to "life, property and the environment" when it ordered fixes last month to two tanks at the company’s Sabine Pass facility.

But in a hearing here yesterday, Cheniere’s attorney said the leaks posed no threat to the public. Even a worst-case scenario, he said, wouldn’t endanger people off-site.

There’s "not a threat that extends beyond the facility," said attorney Kevin Ewing. The agency’s order, he said, was "not warranted."

But PHMSA officials defended their safety order, seeing more potential danger from leaks and fires. They said they aimed to protect the hundreds of workers at the site, in addition to people off-site.

"For us, if there’s an incident, we’re concerned no matter which life is imperiled," said PHMSA attorney Adam Phillips.

The back-and-forth fit a theme of uncertainty yesterday that regulators sought to hammer home during the hearing before Kristin Baldwin, PHMSA’s presiding officer for the hearing.

But a larger theme looming over the hearing was the safety of the country’s drive to become a natural gas exporter.

Sabine Pass, on the Texas border about 100 miles east of Houston, is the first of a new wave of LNG export facilities springing up as a result of the country’s shale gas boom. The plant, which started shipping gas in 2016, has factored heavily in a reshaping of global gas markets around new market players. Last month, Cheniere announced a long-term LNG supply agreement with the China National Petroleum Corp.

Earlier this month, Maryland’s Cove Point became the second major terminal for LNG exports. Four more U.S. export plants are under construction, and another three have been approved.

The leak incident occurred just as natural gas exports head into overdrive, raising questions about the ability of operators and regulators to ensure safety around the giant sites brimming with super-cooled methane. And PHMSA’s investigation revealed that Sabine Pass personnel have been grappling with a series of storage tank issues dating back to 2008, when the site opened as an LNG import facility.

Cheniere requested yesterday’s hearing when it challenged PHMSA’s Feb. 8 "corrective action order." It required the company to shut down two tanks that leaked at Sabine Pass. And it called for a thorough assessment before the company can ask to open them. The agency allowed Cheniere to keep using three other tanks at the site to continue exporting LNG.

It allowed the company to continue importing and exporting gas and to use three other LNG storage tanks at the site. But it required Cheniere to complete a thorough assessment of the problems before it could ask to resume use of the tanks.

Baldwin is to make a recommendation within a handful of business days to Alan Mayberry, PHMSA’s associate administrator for pipeline safety, on the agency’s enforcement action against Cheniere. No decision was announced during yesterday’s hearing at the agency’s Houston regional headquarters. But possible outcomes could include keeping the order, amending it, withdrawing it or converting it to something else.

Another theme yesterday in the hearing room of PHMSA’s Houston regional office was a desire that the safety problems not be aired publicly.

PHMSA initially said last week that the press and public would not be allowed to attend the hearing. That has been the agency’s practice for years.

It was opened after E&E News, with the help of lawyers for the Reporters Committee for Freedom of the Press, formally requested access to the hearing and then threatened legal action (Greenwire, March 21). At least two reporters from other organizations were among the 30 or so people in attendance at times.

But the hearing wound up being closed about as much as it was open.

Ewing, a lawyer with Bracewell LLP, made clear his desire to talk "freely" in addressing certain topics. During a discussion of whether people in the back of the hearing room needed to see an aerial map of the plant on a screen, Ewing seemed to bristle at the focus on people from outside. "My goal, really," he said, "is to present to the participants."

Baldwin said early in the hearing that the public could be required to leave during discussions of confidential commercial information or topics raising security concerns.

Baldwin closed the hearing before noon, after about 2 ½ hours, over an objection raised by an E&E News reporter. The hearing stayed shut well into the afternoon before reporters were allowed to return for attorneys’ closing statements.

During that time, Cheniere’s experts talked about how they believe the situation occurred, Linda Daugherty, deputy associate administrator for pipeline safety, said in an interview. And there was discussion between PHMSA, Cheniere and the presiding officer. They discussed information, she said, that was labeled confidential and business-sensitive.

When they investigated, agency inspectors discovered that LNG had been leaking into a containment ditch around a storage tank. Further inspection revealed that natural gas vapors were leaking from 14 points around the base of a second LNG storage tank (Energywire, Feb. 12). They also reported that Cheniere had been unable to determine the cause of the leaks.

PHMSA issued the "corrective action order" a little more than two weeks after the leaks.

Ewing said the public was never in danger from those leaks. The system in place is designed to handle mishaps, and he said the problems didn’t exceed the system’s capabilities.

He used visual aids and a discussion with a consultant to explain that, in a worst-case scenario, earthen dikes surrounding the LNG tanks can hold the full volume of each tank, or more.

The system is designed so that, even if there were a fire, it would be contained to Cheniere’s site and not threaten the surrounding area, they said. But PHMSA said that a dike full of LNG and gas could burn for days or months.

The leaks PHMSA investigated in January were far smaller. Ewing said there isn’t and hasn’t been an "imminent safety threat" to the public. And, he said, Cheniere takes steps to ensure the safety of workers at the site. He added later that there was nothing close to a factual basis presented for concern of "some kind of pool fire" or catastrophic loss.

The standard for PHMSA to issue a corrective order, he said, should be the likelihood of serious harm to the public. The leak problem in January, he said, didn’t rise to that level.

PHMSA officials said the decision to issue a corrective action order is not one the agency takes lightly.

Julie Halliday, a senior accident investigator with PHMSA, said in the hearing that she had struggled with Cheniere to get information "timely and in enough detail."

And Halliday said she was concerned that greater failures could occur. She said she came away from her visit to the site wondering, "Can those cracks continue to propagate?"

Reports of past problems at the site were incorporated into the decision on whether an imminent hazard existed, said Phillips, the PHMSA attorney. He stressed the importance of protecting life and safety, and the order noted that roughly 500 workers are associated with the Sabine Pass site. Phillips said there was still uncertainty as to the exact cause of the incident.

As the agency learned more about the situation during the leak investigation, he said, agency officials felt "we needed to do something."

In an interview after the hearing, Phillips acknowledged a "tension" between having a good relationship with Cheniere and not seeing the company act fast enough in this case.