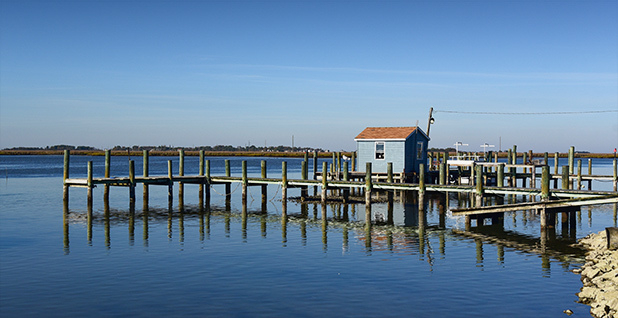 A dock at Tylerton, one of the three communities on Smith Island. Islanders make a living primarily off fish, oysters and crabs and are fighting a dwindling population and isolation to preserve their traditions. Photo by Camille von Kaenel.

SMITH ISLAND, Md. — Fragments of marshes whittled by waves rise a few feet above the Chesapeake Bay. A boat creeps along the jagged sandy edge, fishing lines trailing, and the two men raise their hands in greeting.

For four centuries, islanders in this Eastern Shore community have scratched out a living from the crabs, oysters and fish that thrive in these waters.

Yet natural and economic forces are chipping away at the island. Sea-level rise could put much of it underwater by the end of the century, even as the population dwindles and young people leave for opportunities elsewhere. Some of these problems are hardly new, but for the first time, residents are making a united stand to preserve their way of life.

"Our No. 1 goal is to keep Smith Island a watermen’s community as it’s always been," said Mark Kitching, 54, the president of the Tangier Sound Watermen’s Association and a lifelong islander who speaks with the island’s marked twang, an echo of Old English.

Over the past two years, islanders have partnered with county, state and federal representatives to list and start funding different infrastructure and cultural projects. The efforts began in the aftermath of Superstorm Sandy in 2012, when residents refused a $2 million buyout and instead formed the collective Smith Island United. This summer, they released a "vision plan" outlining the priorities for the island.

Strategies include boosting tourism with better ferry service and slowing erosion with the completion of a decade-in-the-making U.S. Army Corps of Engineers jetty at Rhodes Point, on the western side of the island. They want an improved wastewater treatment plant and faster, more reliable Internet service.

The last Smith Island waterman might already be out on the Bay, Kitching said. So he is also hoping to find money to create an apprenticeship program to bring newcomers in to work with and learn from the remaining watermen.

Kitching said the vision plan may feel like "grasping at straws" at times, but he’s trying to be optimistic.

"It’s a lot of times I’ve wondered if I made the right decision about staying," he said. "But I’m here for the duration."

Much of low-lying Maryland is threatened by increased coastal flooding from sea-level rise, which could reach around 2 feet by 2050 and 5 feet by 2100, according to the latest state projections. Rising temperatures and greenhouse gas concentrations could also upset the fragile ecosystem in the Chesapeake Bay, potentially boosting warm-water species or oxygen-depleted zones, according to a report from the Chesapeake Bay Program’s Science and Technical Advisory Committee.

Picturesque white-slatted houses line the paved and unpaved streets. The nearest high school and hospital in the mainland town of Crisfield lie 40 minutes away by ferry. Winters have frozen residents in their homes for days. Regular customers answer the phone and take orders at the restaurants on the edge of the water, which serve up thick slices of layered Smith Island cake, Maryland’s official dessert.

But Ruke’s Seafood Deck, which has long welcomed visitors at the dock in Ewell, the main hamlet on the island, closed earlier this year when the owner retired. Opportunities on the mainland have been luring away younger islanders, and the median age among the 275 or so residents is around 58, according to the 2010 census.

Gretchen Maneval fell in love with Smith Island when she was looking for an "off-the-grid" vacation and became a part-time resident a little over two years ago. Now, as a trained planner, she is coordinating the implementation of the vision plan.

"There’s investment in the island in a way there hasn’t been previously in years," she said. "The plan is there, substantive partnerships are there."

Grants have already come through for new tourism signage on the island and distance-learning software so the nine kids in the island’s school can interact with peers.

Though the county has not yet officially adopted the plan, getting everyone in one room has sped up the process, said Gary Pusey, the director of planning and zoning in Somerset County. The culture and history of the island make it a priority in addressing the consequences of climate change in the region, he said. About a third of the federal money available to the county for Sandy recovery, around $5 million, is slated to go to Smith Island.

And $8.5 million in federal money set aside for Sandy recovery on government lands is already at work nearby.

Standing between the northern tip of Smith Island and the open Chesapeake Bay is the fragmented edge of Glenn Martin National Wildlife Refuge. It is home to many migratory and nesting bird populations, including tundra swans, American oystercatchers and black skimmers.

"It’s the closest thing you can come to wilderness in the Mid-Atlantic area," said Matt Whitbeck, a wildlife biologist with the Fish and Wildlife Service.

Battered by waves and slowly subsiding, the shoreline had been disappearing by 10 to 15 feet a year, he said. Now, beeping bulldozers and barges are pushing tons of gray rock in front of nearly 4 miles of marshes to slow or stop erosion.

The project, called a "living shoreline," had been on the bucket list for the wildlife refuge for decades. Construction crews will finish placing the boulders this fall. Sand will gradually build back up behind the boulders, and volunteers will help plant vegetation there next year to secure the dunes and the underwater marshes behind them, prime crab habitat.

"By protecting those [submerged aquatic vegetation] beds, we’re not only protecting the fish and wildlife habitat, but we’re also protecting, or helping maintain, the economic backbone of Smith Island itself," said Whitbeck. That’s pleased watermen, for whom the relationship with the government hasn’t always been rosy.

‘We’ll be here as long as the Lord wants’

On Smith Island, some residents believe in man-made climate change. Others do not. They blame the waters that regularly flood the streets and backyards on tides buoyed by strong winds. They point out that jetties, riprap and bulkheads already in place protect the northern side of the island. Erosion is mostly affecting the western side, which is still waiting on a jetty.

The Rev. Rick Edmund, a United Methodist pastor who has ministered to the islanders for the past 15 years, compares his adopted home to Anatevka, the fictional village featured in the musical "Fiddler on the Roof."

"We’ve got some things of uncertainty, but everybody does what they need to in order to survive themselves and make this a viable community," he said.

On Sundays, Edmund tells his neighbors to keep the surrounding environment clean. To island visitors, he promotes the island’s bed-and-breakfasts and houses for sale.

"The island philosophy is, we’ll be here as long as the Lord wants us to be," Edmund said. "And when that time comes to an end, then we’ll move on.

"Whatever we do now is what we’re real concerned about," he added.