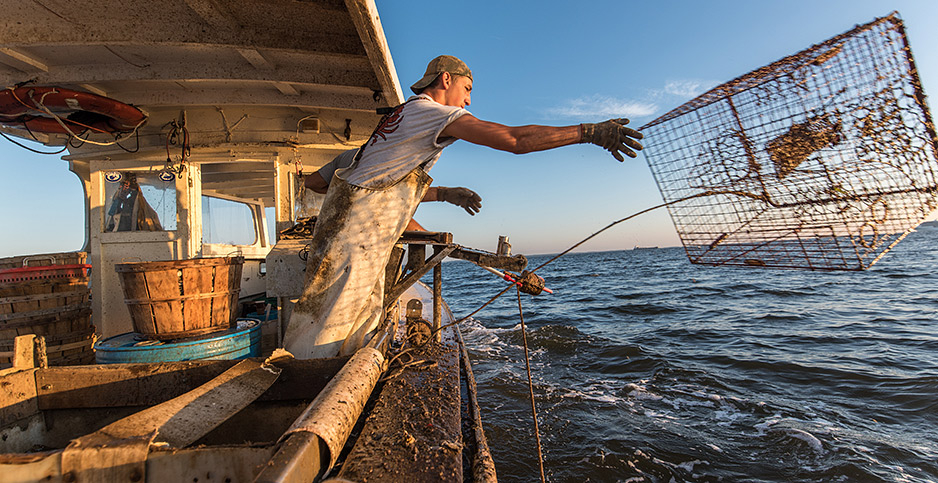 A waterman throws a crab trap off a boat into the Chesapeake Bay in Dundalk, Md. Edwin Remsberg/VWPics/Newscom

Maryland’s blue crab season got off to a fizzle on April 1, a far cry from years past, when watermen faced pent-up demand for the state’s official crustacean.

But now the industry has been hit by a double whammy: Restaurants that serve up to 90% of the crabs in Maryland are shuttered, and even when they reopen, processors say they’ll still lack hundreds of foreign workers to staff their picking houses.

"It is a big hit," said Bill Sieling, executive vice president of the Chesapeake Bay Seafood Industries Association, which has about 60 members.

The Maryland crab fishery is just one of hundreds of fisheries around the nation that got hit hard by the novel coronavirus pandemic.

But fishermen, processors and distributors say they’ll need much more.

For starters, the industry asked Congress and the president to approve $1.5 billion in direct aid for fishery disasters and $500 million to pay for surplus commercial seafood that could be shipped overseas or sent to domestic organizations.

Warning that food supply chains "cannot be turned on and off like a light switch," a coalition of industry groups also asked Trump "to act boldly now to preserve our country’s domestic seafood infrastructure" and tens of thousands of jobs, or face far greater costs down the road.

"Once lost, a supply chain and the infrastructure that supports it can be exceptionally difficult and costly to restart," the groups said in a letter to the president.

In Maryland, the labor shortage is caused by the federal government’s cap on H-2B visas. They are limited to 66,000 for the entire country.

In past years, the state’s crabbers have relied on the visas to bring in seasonal workers from Mexico. This year, the industry’s request for more visas was put on hold as a result of the pandemic. But visas are hard to obtain even under normal conditions, since they’re awarded in a lottery, no longer on a first-come, first-served basis.

Aubrey Vincent, who with her father operates Lindy’s Seafood on Hoopers Island in Maryland, said her family business is not yet in production due to the uncertainty over visas.

But with Congress now expected to approve more aid for small businesses, she’s hoping to get an emergency loan from the federal government to keep the company’s 20 employees on the payroll.

"At this point, we’re just all kind of in survival mode trying to keep all of our American employees employed," Vincent said. "We’ve been fortunate; we haven’t had to lay anyone off yet, and that’s my plan. … I’ve been really, really blessed so far."

Maryland is one of four states — along with Virginia, Alaska and North Carolina — that have asked the Trump administration to release more visas to allow fisheries and seafood businesses to resume their operations.

"Without answers on H-2B visa cap relief for 2020, our seafood industries remain in a unique and perilous positions," Maryland Democratic Sens. Ben Cardin and Chris Van Hollen, along with senators from the other three states, said in a letter to the Department of Homeland Security.

Sieling said that Maryland’s crab processors are producing at only 25% of their capacity and that they’ll need 400 to 500 additional workers if the economy fully reopens.

But he said the visa issue has become even more contentious this year as crabbers face questions on why they want to hire more foreign workers at a time when millions of Americans are unemployed.

"Of course, the reason is that nobody else wants to do this work," Sieling said.

One thing’s for certain: Marylanders like their crabs from the sprawling Chesapeake, the nation’s largest estuary.

The rapid growth came after a baywide harvest of 55 million pounds in 2018, slightly more than the 54 million pounds harvested a year earlier. Hogan called the numbers proof of the state’s "skilled environmental stewardship."

While this year’s harvest is uncertain, government officials and fisheries experts will be studying how the pandemic affects the crab population and other fisheries around the nation.

NOAA has assembled a team of experts to collect and analyze COVID-19-related impacts on the entire seafood industry, including wild harvest and aquaculture.

And in Maryland, the Department of Agriculture is likely to team up with the University of Maryland for a study looking at the economic impacts of both seafood and agriculture, said Stone Slade, director of seafood marketing for the department.

"It’s still in the initial talks," he said. "However, right now really what we’re doing is just trying to let the consumers know where they can get these products still." (The state of Maryland has a website listing locations here.)

One key question facing researchers is whether fish stocks will increase during the pandemic, much as they did after World War II.

But for now, it’s largely an academic question for Maryland crabbers.

"I don’t know what the impact will be on fisheries," Vincent said. "But I hope that what comes out of this is people really make a push to buy local products, because that’s going to be ultimately what gets us through this whole thing."

In the meantime, springtime won’t be the same in Maryland.

There will be less crab for parties and graduations. And Sieling said Americans will be less likely to buy crabs during an economic downturn, especially because they are a delicacy that sells for up to $20 a pound wholesale.

"The market is very shallow," he said. "Everything’s closed. High schools and colleges have closed their graduation exercises. You get your diploma in the mail, I guess."