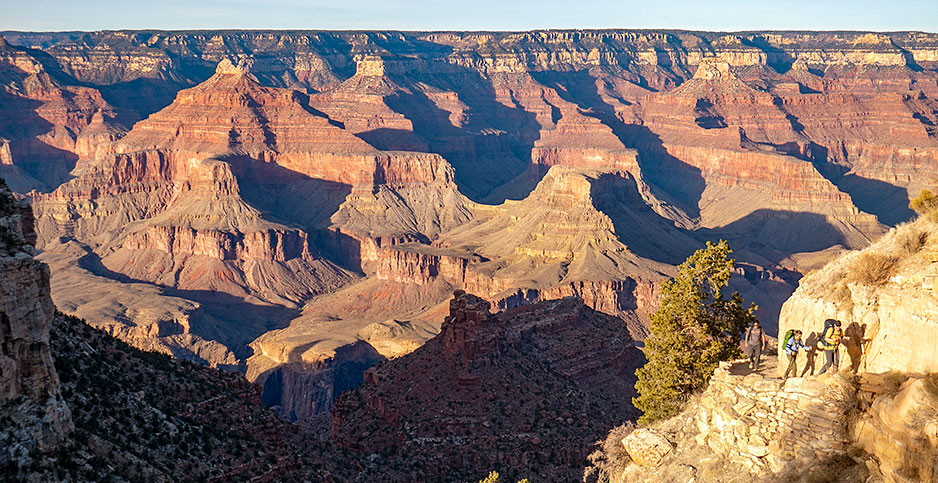 The Supreme Court's precedent on the Antiquities Act was set in 1920 in a legal challenge against the then-Grand Canyon National Monument. M.Quinn/National Park Service

Chief Justice John Roberts this week openly urged opponents of sprawling national monuments to continue their legal fight, suggesting the Supreme Court may be eager to take a fresh look at precedent it first set a century ago.

The Supreme Court declined on Monday to weigh in on whether President Obama exceeded his authority under the Antiquities Act when he created a marine national monument in the Atlantic Ocean (Greenwire, March 22).

But in a four-page statement, Roberts questioned how presidents have implemented the law and suggested other cases that might be better suited to Supreme Court intervention.

In his statement, Roberts wondered whether presidents have abused the 1906 law by ignoring a provision requiring that monuments be "limited to the smallest area compatible with the care and management of the objects to be protected."

"Somewhere along the line, however, this restriction has ceased to pose any meaningful restraint," Roberts wrote. "A statute permitting the President in his sole discretion to designate as monuments ‘land-marks,’ ‘structures,’ AND ‘objects’ — along with the smallest area of land compatible with their management — has been transformed into a power without any discernible limit to set aside vast and amorphous expanses of terrain above and below the sea."

The chief justice went on to suggest that a handful of other lawsuits — including a pair challenging President Trump’s cuts to two Utah-based national monuments — could present "better opportunities" to review use of the Antiquities Act.

"If he has these concerns, it’s likely a majority of the court does," Wood told E&E News, noting that such statements from the Supreme Court are comparable to "reading the tea leaves."

The Pacific Legal Foundation represents both the fishing groups whose lawsuit over the Northeast Canyons and Seamounts Marine National Monument was rejected this week and intervenors in a lawsuit on the Bears Ears National Monument in Utah.

But if the court is interested in narrowing the scope of the Antiquities Act — which allows presidents to set aside public lands as national monuments to protect areas of cultural, historic or scientific interest — Wood said he expects to see an uptick in new challenges with a particular focus on what kind of objects qualify for monument designation and how the "smallest area" standard is applied.

Those cases could come from existing sites or new monuments yet to be designated by President Biden.

"If the president doesn’t want the legal dispute, maybe he exercises a little restraint," Wood added. But he acknowledged that the Biden administration "might be reluctant to give up that option, or to at least not use it."

But Mark Squillace, a natural resource law expert at the University of Colorado Law School, suggested Roberts’ comments could simply be a caution over how monuments are created.

"It’s a warning to future presidents to be very careful about how you structure monument proclamations," Squillace said. "But I don’t necessarily think it signals that future proclamations or past proclamations are going to be struck down on those grounds."

The Supreme Court has long sided with presidents on their designation of national monuments — meaning the court would need to reverse precedent first set in 1920 on a challenge to what was then the Grand Canyon National Monument.

"This has been an issue really from the very beginning of the Antiquities Act," explained Squillace. "That language in the statute, ‘smallest area,’ has always been thought to be a potential limit on the president’s authority."

In that early lawsuit against the Antiquities Act, an Arizona businessman and miner challenged the establishment of an 808,000-acre site by President Theodore Roosevelt — one of 18 national monuments the then-president established — asserting there was no authority for its creation.

But the court rejected that argument in a unanimous decision, noting the Antiquities Act allows for the preservation of "objects of historic or scientific interest."

"The Grand Canyon, as stated in his proclamation, ‘is an object of unusual scientific interest,’" Justice Willis Van Devanter wrote in Cameron v. United States.

Van Devanter continued: "It is the greatest eroded canyon in the United States, if not in the world, is over a mile in depth, has attracted wide attention among explorers and scientists, affords an unexampled field for geologic study, is regarded as one of the great natural wonders, and annually draws to its borders thousands of visitors."

In the years since, the Supreme Court has taken up only a handful of cases on the Antiquities Act (Greenwire, Aug. 25, 2017).

In the 1976 decision Cappaert v. United States, the high court confirmed the president’s ability to protect more than human-made antiquities when the court rejected a lawsuit challenging the designation of Devils Hole, a unit of what is now Death Valley National Park.

Plaintiffs in that lawsuit argued that the law was meant to safeguard only archaeological sites, rather than the endangered fish that live in the unusual desert setting.

Opponents of national monument sites have long argued that Congress’ original intent for the Antiquities Act was to guard against "pot-hunters," including the museums and researchers who were looting archaeological sites in the early 1900s.

But Chief Justice Warren Burger wrote in that unanimous 1976 opinion: "The pool in Devil’s Hole and its rare inhabitants are ‘objects of historic or scientific interest.’"

Other lawsuits challenging the size of monuments have failed to rise to the Supreme Court, like a 1997 challenge that argued President Clinton exceeded his authority when he established the then-1.9-million-acre Grand Staircase-Escalante National Monument in Utah (Greenwire, March 16, 2018).

In a 2004 decision, federal Judge Dee Vance Benson, a President George H.W. Bush appointee, found that Clinton complied with the Antiquities Act by "setting aside, in his discretion, the smallest area necessary to protect the objects."

"With little additional discussion, these facts compel a finding in favor of the President’s actions in creating the monument. That is essentially the end of the legal analysis," he wrote.

In his opinion, Benson also noted that while the impetus for the Antiquities Act may have been to protect "’small reservations’ of ‘interesting ruins,’" it has nearly always been used to create "large scenic monuments."

Squillace noted: "To a large extent, I think the U.S. Supreme Court put this to rest way back in the 1920s. … For the court to pull back on that decision would be pretty tough at this stage."

Should the court attempt to revisit the idea of whether landscape-scale monuments or ecosystems are permissible designations, however, Squillace suggested the government will likely rely on highly detailed presidential proclamations in its defense.

"There’s a pretty strong factual record that supports the decisions," he said. "Unless the court were to reject the notion of a landscape-scale monument, I think it’s going to be pretty hard to second-guess the president’s decisions."

Natural Resources Defense Council senior attorney Kate Desormeau noted that Congress has chosen not to revisit the Antiquities Act to put an "acreage limit" on new sites — outside of a restriction in 1950 barring new monuments in Wyoming, as well as provisions in the Alaska National Interest Lands Conservation Act for that state.

"This is the act that Congress intended to pass. And that’s how presidents of both parties have applied it for over a century," Desormeau said.

In addition to as-yet-formulated new challenges, the Pacific Legal Foundation’s Wood suggested that parallel lawsuits — one in the 9th U.S. Circuit Court of Appeals and a pair in the U.S. Court of Appeals for the District of Columbia Circuit — targeting the Cascade-Siskiyou National Monument could become the next major battleground for the Antiquities Act (Greenwire, Jan. 27, 2020).

The lawsuits — filed in D.C. by the American Forest Resource Council and Association of O&C Counties and in Oregon by Murphy Co. and Murphy Timber Investments LLC — said Obama overreached his authority when he expanded the monument to include former railroad lands, restricting timber harvest on that acreage. The 100,000-acre monument straddles the California-Oregon border.

In the D.C. case, a judge ruled in favor of the plaintiffs — finding the monument’s management plans failed to account for the timber harvest mandates — while in the Oregon case a judge came down in defense of the government (Greenwire, Nov. 26, 2019).

But environmental advocates note those cases aren’t focused on the Antiquities Act, but instead are a dispute over the application of the Oregon and California (O&C) Revested Lands Act of 1937.

"They don’t present any of the questions that Justice Roberts is talking about," explained Earthjustice Northwest Office attorney Kristen Boyle.

Both cases are on appeal to their respective circuits but are on hold pending the outcome of two other lawsuits that center on Bureau of Land Management-issued management plans for unrelated O&C lands.