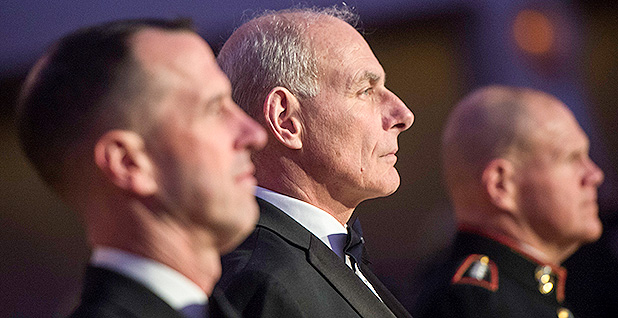 White House Chief of Staff John Kelly worked on response efforts to hurricanes and other disasters while in the military. Navy Petty Officer 2nd Class Dominique A. Pineiro/chairman of the Joint Chiefs of Staff/Flickr

It’s a signal that he may bring a global view about the threats of climate change to the West Wing, according to observers.

Kelly, a retired four-star general, has spoken little of climate change on the record. When he has, the freshly minted right hand to President Trump has avoided attributing causes and effects to rising temperatures. Instead, he’s spoken in terms of addressing environmental degradation, restraining energy waste and responding to extreme weather events.

"As with the campaign today to raise awareness of climate change — whether one agrees or disagrees with the cause and effect claims — all are at least fully aware of the issue," Kelly said in an April 2016 Senate Homeland Security and Governmental Affairs Committee hearing. "Even those who reject the science have reduced their energy consumption and know it is good for the environment."

All the while, Kelly was preparing for events that climate change stands to make increasingly common in the global South, according to scientists.

Kelly stressed collaboration with regional militaries on humanitarian aid and disaster relief while also pushing against proposed spending cuts that would threaten those operations in annual "posture statements" between 2013 and 2015. Having witnessed an "increase in Haitian and Cuban migrant flows, the potential spread of infectious diseases like Ebola, and the devastating drought in Central America," Kelly couched disaster assistance in humanitarian terms.

Budget cuts impaired Southern Command’s, or Southcom’s, ability to conduct disaster response programs with regional partners in 2013, Kelly said in his posture statement that year. He also showed a willingness to fight for spending to maintain the United States’ global footprint, a sharp contrast to the isolationist inclinations in the White House.

"As the Services absorb large reductions to their budgets, this will affect U.S. Southern Command’s ability to immediately respond to crises and disasters, which could lead to preventable human suffering and loss-of-life," Kelly said in 2014.

In that respect, some describe Kelly’s climate views as aligned with Defense Secretary James Mattis, who as head of U.S. Central Command spoke often of climate change presenting security and humanitarian challenges abroad.

"I know that anyone who has been Southcom commander is going to have deep knowledge of the risks associated with climate, weather and water disruptions just because it’s such an essential component of the totality of the southern region," Sherri Goodman, the undersecretary of Defense for environmental security under President Clinton and now senior adviser for international security at the Center for Climate and Security, said in an interview.

John Conger, former assistant secretary of Defense for energy, installations and environment under Obama, said that while Kelly led Southcom, it was "a major player in the release of the climate adaptation road map" that then-Defense Secretary Chuck Hagel highlighted in an October 2014 speech at the Conference of Defense Ministers of the Americas in Peru.

"I think it’s worth noting that," said Conger, senior policy adviser with the Center for Climate and Security.

Kelly will install a process to ensure all voices are heard rather than prescribe a single policy, suggested Andrew Holland, director of studies and senior fellow for climate and energy at the American Security Project. In that sense, Kelly might prove a foil to voices like chief strategist Steve Bannon, who helped persuade Trump to exit the Paris climate accord.

"Suffice it to say that Gen. Kelly has never (to my knowledge) been on the record on climate," Holland said in an email. "But he is very close to Mattis and I would say their thoughts mirrored each other."

But Kelly’s past statements are likely best viewed through the prism of operational readiness rather than any formal policy, said Neil Bhatiya, a research associate in the energy, economics and security program at the Center for a New American Security.

Perhaps the most significant effect Kelly might have on energy policy is merely instilling order at the White House. In turn, that could create space to pursue bilateral agreements with other nations on energy policy, Bhatiya said.

"It’s difficult to know ahead of time how that will translate to a chief of staff position, as his responsibilities are now broader and will encompass a lot of the administration’s energy and environmental priorities," Bhatiya said in an email.

Kelly’s duties atop Southcom were similarly broad, but he recognized that the U.S. military’s ability to provide humanitarian aid was a valuable soft-power tool that could improve the performance of regional governments. His comments shed light on a global worldview in which the United States plays a valuable role in helping less wealthy nations bounce back from natural disasters.

In his final posture statement as Southcom head in 2015, Kelly touted funding of 172 humanitarian projects in the region, such as building disaster relief warehouses and emergency shelters.

"Last year, the Government of Haiti successfully responded to flooding in Nord using emergency response facilities constructed under this program," Kelly said in that statement. "This is a major step and a sign of continued progress in Haiti; in the past, such an event would have required U.S. or outside assistance."

Kelly’s background at Southcom would have exposed him to various nongovernmental organizations, subnational groups, the U.S. Agency for International Development and international actors active in the climate and energy arena, noted Goodman, who is now a senior fellow at the Woodrow Wilson International Center for Scholars. She said the region is unique in its partnerships with those groups.

Still, Southcom under Kelly was less overt in connecting climate change threats to operations than other U.S. command centers, according to a February 2016 working paper by Rand Corp. While Southcom assists other nations in humanitarian aid and disaster relief, it "has not specifically identified actions resulting from climate change potential," the authors said.

That doesn’t mean his post was ignoring climate change. A voluntary group called the Environmental and Energy Collaboration Group released a 2014 report showing how environmental and energy challenges, including climate change, affected regional militaries. The report was compiled by subject matter experts in Chile, Colombia, El Salvador, Trinidad and Tobago, and the United States.

Kelly exhibited an awareness that such calamities could have a tremendous effect.

"Every year, we regularly exercise our rapid response capabilities in a variety of scenarios, including responding to a natural disaster, mass migration event, an attack on the Panama Canal, or evacuating American citizens," Kelly said in his 2014 posture statement, in which he warned that looming cuts endangered planning for mass migration events from the Caribbean.

He said he was "deeply concerned" about an "uptick" in Haitian migration.

Correction: Sherri Goodman was undersecretary of Defense for environmental security under President Clinton, not President Obama.