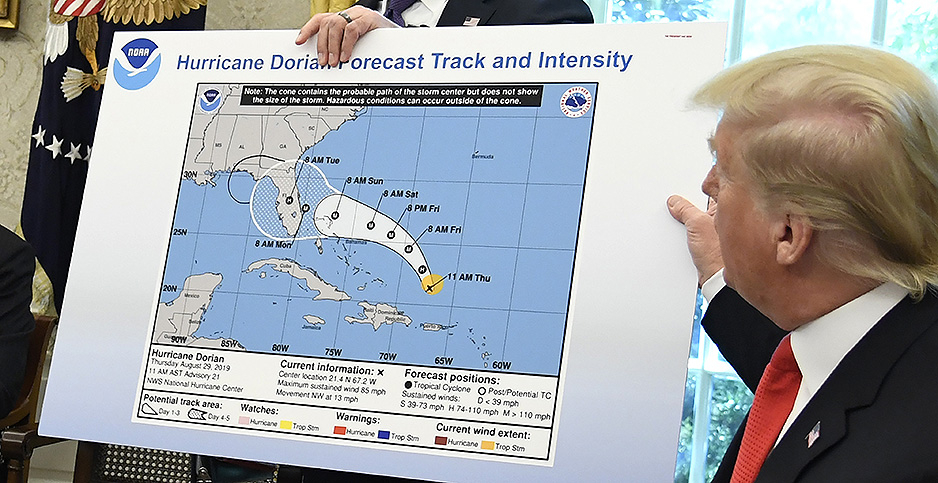 NOAA’s acting chief scientist said he will investigate whether the agency violated policies by siding with President Trump after the White House changed a map to show Alabama could get hit by Hurricane Dorian. Mike Theiler/UPI/Newscom

NOAA’s acting chief scientist will investigate whether the agency violated its own policies by siding with President Trump after he displayed a doctored map last week to show that Alabama could get hit by Hurricane Dorian.

The probe comes after NOAA put out an unsigned press release late Friday afternoon that criticized forecasters in the National Weather Service’s Birmingham office for correcting the president after Trump insisted the storm was headed toward Alabama.

"My understanding is that this intervention to contradict the forecaster was not based on science but on external factors including reputation and appearance, or simply put, political," Craig McLean, the acting chief scientist, said in an email to employees last night.

McLean called it "a complex issue involving the President commenting on the path of the hurricane," adding: "The NWS Forecaster(s) corrected any public misunderstanding in an expert and timely way, as they should."

"They did that with one thing in mind: public safety," Uccellini said.

Many scientists and other critics blasted the agency over the weekend, saying NOAA — the parent agency of the National Weather Service — had lost public trust by backing Trump.

Weather forecasters immediately sought to distance themselves from the press release.

NOAA has declined to say who issued the statement or who signed off on it.

But NOAA released a statement on the investigation this afternoon, saying its policies on scientific integrity and communications “are among the strongest in the federal government and get high marks from third party observers.”

“The agency’s senior career leaders are free to express their opinions about matters of agency operations and science,” said Scott Smullen, a spokesman for NOAA. “The agency will not be providing further official comment and will not speculate on internal reviews."

Dan Sobien, president of the National Weather Service Employees Organization, issued his own statement on Twitter, saying "the hard-working employees of the NWS had nothing to do with the utterly disgusting and disingenuous" statement released by NOAA.

NOAA’s statement backed Trump after he spent several days last week trying to convince the public that he was correct by including Alabama in the states that would get hit by the hurricane.

The statement said: "From Wednesday, August 28, through Monday, September 2, the information provided by NOAA and the National Hurricane Center to President Trump and the wider public demonstrated that tropical-storm-force winds from Hurricane Dorian could impact Alabama."

Clearly siding with Trump, the statement said the Birmingham office "spoke in absolute terms that were inconsistent with probabilities from the best forecast products available at the time."

In his email, McLean said NOAA’s Scientific Integrity Policy and Code of Scientific Conduct states "that all NOAA employees shall approach all scientific activities with honesty, objectively, and completely, without allegiance to individuals, organizations, or ideology."

"The content of this press release is very concerning as it compromises the ability of NOAA to convey life-saving information necessary to avoid substantial and specific danger to public health and safety," said McLean. "If the public cannot trust our information, or we debase our forecaster’s warnings and products, that specific danger arises."

"In my role as Assistant Administrator for Research, and as I continue to administratively serve as Acting Chief Scientist, I am pursuing the potential violations of our NOAA Administrative Order on Scientific Integrity," he said, adding: "I have a responsibility to pursue these truths. I will."