Chief Tooke steps down amid probes into misconduct 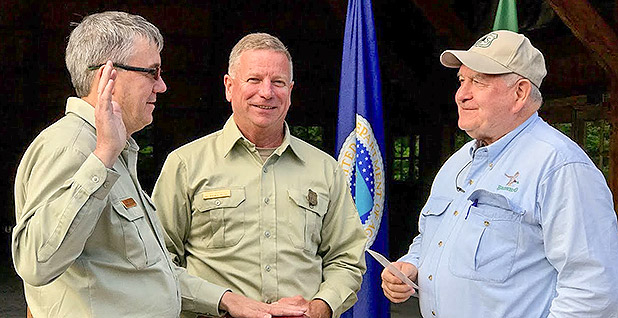 The move came amid inquiries into a reported romantic relationship he had with a subordinate at the agency a decade ago.

Tooke’s past conduct comes on top of a broader inquiry by Agriculture Department lawyers into a history of sexual misconduct in the Forest Service, especially in wildfire fighting crews.

"I have decided that what is needed right now is for me to step down as Forest Service Chief and make way for a new leader that can ensure future success for all employees and the agency," Tooke said in an email to staff.

With his swift departure, Tooke ended a 37-year career at the Forest Service, where he started at age 18. He never worked anywhere else in his career, according to Tooke.

"In my experience, in order to effectively lead any organization, you must have the moral authority to inspire its members to work toward the goal of continuous improvement," Perdue said in a statement.

"Chief Tooke has determined that it is best for the Forest Service, its future, and its employees that he step aside," he said. "I thank him for his decades of service to this nation and to the conservation of its natural resources."

Tooke’s past relationship came to light in January with news reports that described an affair with an entry-level employee when Tooke, married, was a deputy forest supervisor in Florida.

A report in The Daily Caller said Tooke had arranged for the woman’s promotion and that he had maintained contact with her against directions from superiors (E&E News PM, Jan. 8).

Details of Tooke’s past were outlined in a letter from a Forest Service retiree to congressional offices, complaining that Tooke’s history disqualified him from leading the agency’s reviews into its long culture of sexual harassment.

The retiree reached out to Sen. Johnny Isakson (R-Ga.), as well as to the House Oversight and Government Reform Committee, which has been delving into the Forest Service’s record on sexual harassment.

Then, more damaging news about the Forest Service’s history appeared on the "PBS NewsHour" in recent days, detailing groping, inappropriate touching and retaliation against female employees who reported such incidents, especially in the firefighting service, which is overwhelmingly male.

USDA told the "NewsHour" last week that it had "engaged an independent investigator" to look into Tooke’s conduct, including relationships with subordinates before he became chief last year.

"In some of these news reports, you may have seen references to my own behavior in the past," Tooke wrote. "This naturally raised questions about my record and prompted an investigation, which I requested and fully support, and with which I have cooperated."

He added, "I have been forthright during the review, but I cannot combat every inaccuracy that is reported in the news media."

The news reports in January said Tooke had been verbally reprimanded for the relationship with the subordinate in Florida but that his personnel file didn’t contain any complaints about such conduct and that he had a clean file.

Tooke went on to become regional chief of the Forest Service’s Southern Region.

His resignation comes as the agency also tackles policy challenges such as rapidly rising costs of wildfires and continuing debates about how best to protect forests from them. He recently visited Alaska, where competing interests of loggers and environmentalists are continually in play.

In his note to staff, Tooke cited the service’s recent work to become more accountable on issues related to sexual misconduct, including improving training, appointing a senior adviser on the issue and forming an advisory panel.

"Every employee must feel safe, valued, respected and free to speak up without fear of reprisal," Tooke said.