China isn’t talking with the U.S. What it means for climate. 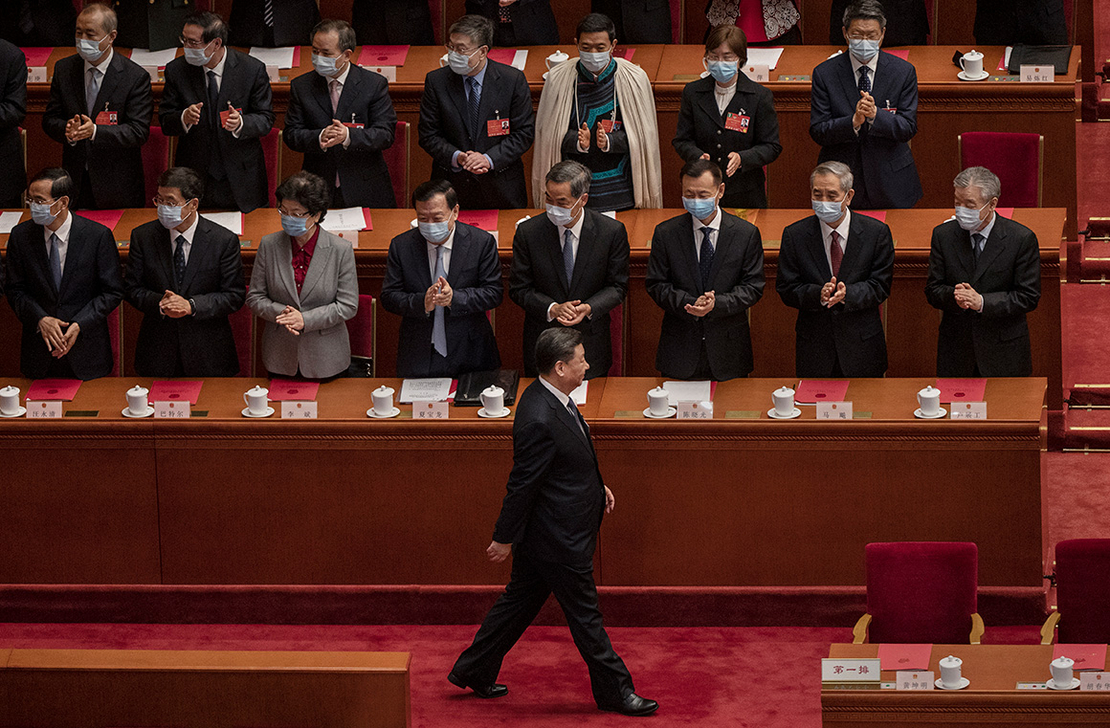 Chinese President Xi Jinping is applauded by members of the government at a session of the National People's Congress in March. China announced last week that it would halt diplomatic talks about climate change with the United States. Kevin Frayer/Getty Images

China’s decision to suspend climate diplomacy with the U.S. could damage, but not derail, international efforts to tackle global warming, according to analysts and climate advisers to past U.S. presidents.

The move announced Friday by China’s foreign ministry comes three months ahead of global climate negotiations in Egypt and as many countries struggle to maintain their emissions pledges amid rising energy prices.

Cooperation between China and the United States has helped catalyze international action in the past, and if relations remain icy ahead of the November summit, it could send a negative signal.

“It won’t stop the U.S., the E.U. and other players from trying to make progress,” John Podesta, a climate adviser to former President Barack Obama, said in an interview. “But it makes the negotiation all that much more difficult if there’s no serious dialogue going on between the two largest global emitters.”

“The climate crisis is not a bilateral issue, it’s universal,” he said in a statement. “Suspending cooperation doesn’t punish the United States — it punishes the world, particularly the developing world.”

Much depends on how long the chill lasts and whether it extends to broader fora like the Group of 20, which includes a wider array of developed and emerging economies and is also scheduled to meet in November.

Climate was among several issues, including military coordination and transnational crime, that China said it would walk away from in response to House Speaker Nancy Pelosi’s visit to Taiwan last week. China said in an announcement that discussions were suspended but not canceled.

Joanna Lewis, an energy and environment professor at Georgetown University, said China was looking for “things to use to send a signal to the United States that would actually sting” following Pelosi’s visit to Taiwan, which China sees as a breakaway province.

Podesta suspects technical discussions could continue on issues like curbing methane emissions — a key part of a joint declaration announced by the two countries at last year’s climate talks in Glasgow, Scotland.

“At the end of the day, the reason the dialogue exists is because it’s in each country’s interests,” Podesta said.

Li Shuo, a senior global climate adviser for Greenpeace East Asia, said he worries that the move might mark a shift in how climate is treated within the greater U.S.-China relationship.

“For a long time, the two countries [have been] willing to set a separate ‘cooperative’ lane in their engagement and climate has been the ‘star’ issue there,” he said in an email.

China’s move raises the question of whether that is still the case.

It’s not the first time climate change action has fallen victim to instability in U.S.-China relations. There have also been less formal pauses in the past, said Podesta.

But climate has been one area where leaders have continued to find common ground, with far-reaching global implications.

In 2013, Obama and China’s president Xi Jinping agreed to phase down the production and consumption of super pollutants known as hydrofluorocarbons. At climate talks a year later, the two sides forged a deal that reconfigured what developed and developing nations would contribute to the climate process. It helped usher in the landmark Paris Agreement.

Then at last year’s talks, a surprise deal with Beijing in the final hours of negotiations helped inject momentum into the Glasgow pact, which aims to phase down the use of coal, and acknowledged for the first time the role of fossil fuels in driving global warming (Climatewire, Nov. 11, 2021).

China’s climate minister, Xie Zhenhua, noted at the time that cooperation was “the only choice” between the two superpowers and that the joint agreement laid out a series of actions the two sides would work on over the next year.

Those included efforts to tackle methane, a potent greenhouse gas often associated with oil and gas production, and establish a working group to enhance climate action this decade. China also agreed to develop a national action plan on methane.

Even as U.S.-China relations have grown more tense in recent years over China’s human rights abuses, trade tariffs and Beijing’s actions toward Hong Kong and Taiwan, constructive talks on climate change had continued, due in part to work by Kerry and Xie, said Podesta.

But making progress on climate issues has been challenged by those other distractions.

“By letting geopolitics now be the tail that wags the climate dog, it represents a shift in Beijing’s approach — from seeing the merits of allowing climate to be a standalone ‘oasis’ in the relationship to instead succumbing to those thinking purely through a geopolitical prism,” Thom Woodroofe, a fellow at the Asia Society Policy Institute, said in an email.

While bilateral agreements are one way to get the United States and China to move faster to curb their emissions, it isn’t the only way, Alexandra Hackbarth, a senior policy adviser at E3G in Washington, said in an email.

“Both have committed to invest in green technologies at home and ramp up support on the energy transition abroad,” she said. “If they are serious about these commitments, US-China competition could lead to more climate action.”

Ahead of last year’s climate talks, China announced that it would end new public investments in coal-fired power plants abroad. It is also the world’s top investor in clean energy, putting more than twice as much as the U.S. into measures like renewable energy and electric vehicles, according to Bloomberg NEF.

At the same time, China has continued to approve new coal projects at home, and its climate pledge aims only to peak emissions before 2030.

That could make Senate passage of the “Inflation Reduction Act,” which offers $369 billion in climate and energy spending, a source of added pressure. Podesta called the bill “massively important” because it puts the United States closer to meeting Biden’s goal of cutting emissions in half by 2030.

Paul Bledsoe, a strategic adviser at the Progressive Policy Institute and a former climate aide in the Clinton White House, said: “The onus is now on China … to demonstrate to the world that they have some sort of plan to really bring down their emissions.”