China steps reluctantly into spotlight as U.S. heads for exit 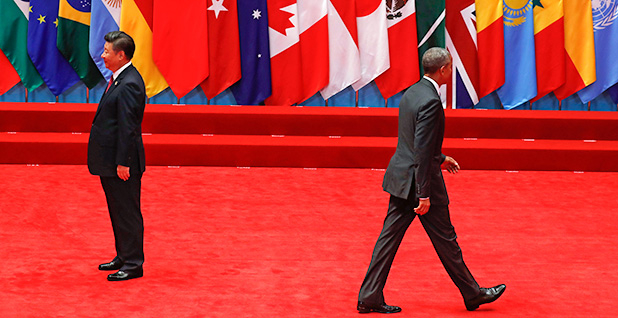 The world’s largest greenhouse gas emitter and second-largest economy is not backing away from the challenge — or the Paris Agreement, as Trump has vowed to do.

Xie Zhenhua, China’s top special envoy, reiterated yesterday that his country’s stance on the climate deal will "remain the same and unchanged," no matter what the world’s other economic superpower chooses to do.

That’s been the Chinese message throughout the U.N. conference that concludes today in this imperial desert town. Participants here, still reeling from last week’s news that the United States has elected a president who plans to cancel or renegotiate Paris, have warned that China’s steadfastness will place America at a competitive disadvantage economically and politically if Trump doesn’t recant.

"I can’t imagine a scenario where U.S. companies are not in that game," echoed U.S. Special Envoy for Climate Change Jonathan Pershing. The U.S. delegation has taken to answering all questions about Trump’s Paris stance by presenting climate action as an economic boon.

A look at China’s recent progress on climate and energy shows that China has indeed made strides in both — policies its officials here say are in the country’s own national interest.

IEA’s "World Energy Investment" report shows that China was the largest destination of renewable-based power capacity investment in the world last year, reaching more than $90 billion, or over 60 percent of its total investment in generation.

China also appears likely to deliver on its Paris pledges of peaking emissions and drawing 20 percent of non-fossil-fuel sources by 2030 several years early. Add to that the boom in Chinese renewable energy and next year’s debut of an economywide cap-and-trade program, and China has become a much-needed good-news story here.

By contrast, Trump’s presidency casts serious doubt on the United States’ ability to meet its own commitment to cut emissions between 26 and 28 percent below 2005 levels by 2025 — though the U.S. delegation has promised foreign colleagues here that America’s private sector can deliver without federal support.

"The United States and China agree on some issues and disagree on others," noted Sandalow, who now heads Columbia University’s Center on Global Energy Policy. "And we have tensions on some issues where we are seeking to enlist the aid of other countries to support us. If the United States were to withdraw from the Paris Agreement and China gains credibility as a result, China would have more credibility with other countries across a whole range of issues."

If Trump’s Paris exit is perceived by other countries as a symptom of a broader U.S. decline vis-à-vis China, that will weaken the United States’ position in Asia-Pacific politics, she said.

"That would be great, since they’re one of the world’s leading polluters," said Florida Sen. Marco Rubio (R).

"I just don’t have a lot of confidence that the Paris Agreement will lead to any meaningful outcome," Rubio said. "The largest carbon emitters and the ones who are emitting the most in the future aren’t even committed to doing anything meaningful for two decades or longer."

U.S. should brace for ‘reputational costs’

China’s role as a potential climate hero is new. Vanquished Democratic presidential nominee Hillary Clinton frequently recounted how she and President Obama crashed a meeting led by the Chinese at the 2009 climate talks in Copenhagen, Denmark, to insist that China come back to the negotiating table.

And for years, China insisted that as a developing nation, its responsibilities to cut emissions were much less than those of rich countries like the United States. But that long-held position was effectively demolished in 2014 when President Obama and China’s President Xi Jinping jointly announced their Paris pledges. It included China’s first-ever promise to cap greenhouse gas emissions and injected new life into the flagging U.N. climate process.

Climate change, which has been a bright spot in an otherwise complicated U.S.-China relationship, could become an area of particular tension between the world’s two superpowers if China perceives it has been jilted, Li said.

Meanwhile, China has expressed some trepidation about becoming the world’s climate "leader," especially when it comes to providing finance.

China’s top special envoy Xie yesterday noted China’s willingness to partner with other countries or alliances, including the European Union. The feeling appears to be mutual. E.U. Climate Action and Energy Commissioner Miguel Arias Cañete said yesterday that the bloc will seek ways to partner with China in the wake of the U.S. election.

But while many painted a rosy picture of Chinese commitment, Harvard University’s Robert Stavins said a U.S. departure could still signal the unravelling of the Paris accord as other countries become reluctant to take on commitments.